We headed down to Orange Beach on Friday for the first time since November (Chris’ Aunt and Uncle have a house on Wolf Bay that they go to every weekend, and we often join them). Ali has gotten a little more persnickety about where she sleeps, so I was worried about that – both for the car ride (since we have the forward facing car seat now), and naps and nighttime. She definitely did have sleep issues, but luckily she is in that really happy phase I was talking about, so it wasn’t so bad. She didn’t sleep AT ALL on the way down there – so she was up from 11:30 until 7:00, which she has NEVER done before, and of course then had trouble going to sleep because she was so overtired. But she was quite a doll all the way down there – she really didn’t fuss at all! She just played and talked the whoooole time! :)

On Saturday, we went to the outlet mall, and there is a new store which will now be my favorite – there is a BCBG/Max Azria outlet, and of course I don’t actually shop at the BCBG store at the Summit, because everything in there is like $200, but I went into the outlet to see what they had, since I do love their clothes. And – the deals were AMAZING!! It was so exciting. I bought several shirts for $19-$35 that were originally $150-$200!! Now, I KNOW that excites all of you as much as it did me!! :) I really wanted to go back today before we came home – they had jeans for $30 that I really wished I had tried on! But my desire to get home outweighed that. I also stocked up on Ali’s Carter’s fleece jammies – we use them all year round since she doesn’t leave her blanket on, and since it’s the end of winter, they were marked down from $20 to $3.99. I really love outlet malls!!

The funniest thing that happened at the outlet mall happened at Carter’s. I ran out of the store for a minute, and when I came back in, Chris was paying at the counter, and looked like a kid caught with his hand in a candy jar. He was buying Ali a pair of pink light-up shoes that he just thought were so cool, and when he had showed me earlier, I had said “yeah…they’re ok…” – well he bought them!! It was so cute that he actually cared enough about her stuff to do that. But he was so bashful about having bought them without consulting me – as if I’m the sole person that can pick out Ali’s clothes! :) Apparently, they didn’t have light-up shoes when Chris was a kid (he is old), and so since HE didn’t get to experience the fun, he wanted Ali to get it. Granted, she LOVES them. She kept staring at her feet for the rest of the weekend.

Kitty and Leo had a Krewe Meeting (their Mardi Gras club) Saturday night, so we went to dinner on our own. We went to the Oyster House, and Chris had a great idea for feeding Ali. I usually feed her raw (or steamed) veggies, fruits, cheese, and sliced meats at home, so he said that the salad bar would be just like an at-home meal for her. It was great! We also got her some chicken fingers, but she ate all kinds of finger foods from the salad bar. We’ll be remembering that trick. We ended up being sat at the same table that we told Kitty and Leo we were pregnant almost 2 years ago. Ali didn’t seem to grasp the sentimentality of it all for some reason.

As far as naps and sleeping went, Ali did ok – we put her in the laundry room, because there are no windows in there (her room at home is blacked out, so if she’s in a regularly lit room, she wakes up really early. I know – we’ve got to stop that at some point. One day.), and for some reason for naps, I ended up having to sit in there and tell her to lay down and go night-night when she would start to stand up, then she would fall asleep. Having to sleep in weird places does strange things to babies. But it worked. She did better than she’s ever done sleeping at night at Kitty and Leo’s. The laundry room was a great idea.

Sunday, we went to eat at the Shrimp Basket (we were headed to Sea N Suds, but for some reason, they are now closed on Sundays), and then we went to the Zoo!! For those of you who have never been to the Gulf Shores Zoo, you MUST go. It is so awesome – you can feed almost all of the animals! We have now all three had “biting” experiences, but that’s what makes it unique, right? Chris got bit by a turtle 3 years ago (and isn’t interested in feeding the animals anymore for some reason), I got bit by a camel a year and a half ago when I was 7 months pregnant (it hurt!!), and this year, Ali got bit by a duck. :) Now, thank goodness, the ducks bite me all the time, and it doesn’t really hurt, I think it just scared her. They actually bit her finger back in November too, and she didn’t even notice. But this time, she was standing at the fence, and she stuck her finger right to the duck’s mouth. How could it resist? It bit her whole finger, and of course she cried, but only for about 15 seconds. She got over it really quickly, and still fed the other animals, although she was a little skittish (but granted, she was a little skittish at the Birmingham Zoo petting part last time, so I’m hoping and justifying that it wasn’t my fault by letting my 14 month old get bit by a duck) :)

On the way home, she slept for an hour. So in grand total both ways, she slept for ONE hour of 9 hours in the car. Whew!! She was a little more whiny on the way back, but who could blame her? It really is exhausting traveling with a baby – even if they do behave, because you’re constantly entertaining them and pacifying them. This was a good reminder for me of why Chris and I are taking a trip by ourselves for our anniversary in three weeks…I’ve been thinking “But Ali is at such a fun stage! She would be fun to have along!”, but I am glad that we are taking my parent’s wonderful advice and making time for trips for just the two of us. It is so healthy! And relaxing! So as much fun as it is to take Ali on a trip, it will also be fun, in a different way, but just as fun, to take a trip on our own in a few weeks.

Here are some pictures from this weekend:

Here is Ali in Leo’s hat (she always wears this when we go down there): 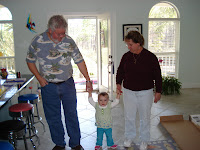 OK – this was a lucky picture – OF COURSE Ali would NEVER fall asleep on the floor. . .everything has to be perfect to get her to fall asleep. But she will lay on pillows. . .so I had laid her down for a picture, and she just happened to blink when I snapped the picture. :) 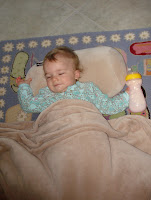 Here’s her actually just laying on the pillow. :) 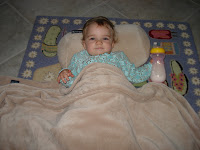 Ali stuffing her face with cheese at the Shrimp Basket: 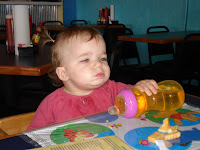 Here’s Ali watching the ducks with great intrigue – right before she stuck her finger in there and the duck bit it. 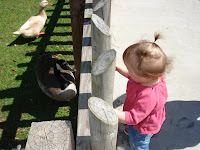 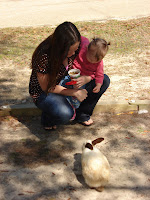 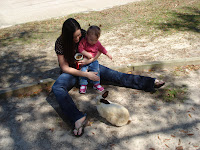 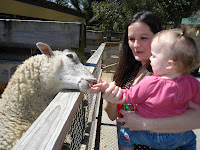 Ali pointing at the itty bitty deer. . .she really loved watching him! 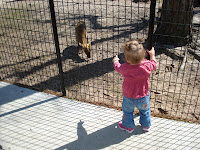 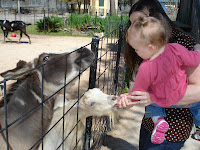 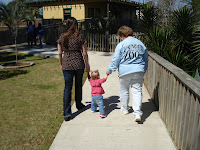 2 thoughts on “weekend at the beach!”