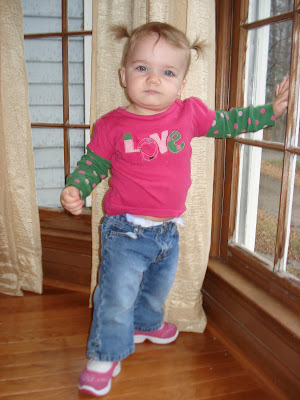 This is a picture that I took of Ali today. She’s got enough hair now to do side pigtails instead of the devil horns on top of her head (I liked my little brother’s name for them better – he said she looked like a viking warrior). Her more “real” pigtails really make her look like a little girl instead of a baby!!

I am so excited about a new development with Ali. After going back and forth between fighting sleep and embracing sleep, she seems to have learned how to purposefully communicate when she is tired. In the past couple of days, she has started saying “nie nie” when she gets sleepy. And sure enough, as soon as I lay her down, she goes right to sleep. It seems that she has realized that she likes sleep. This is good!
I LOVED my sleep as a child – I would go get my blanky and paci and tell Mom that it was time for a nap, or to go to sleep. It seems that maybe Ali is headed towards that. But then again, everything (good and bad) is a phase, and anything can change at any time!
On a random note, I had a gross occurrence today. I had noticed earlier in the week that I was missing a sippy cup (I only have a few, so I have to keep close tabs on them). I was getting ready to go to lunch for the first time this week, and I got out Ali’s lunchbox, and it seemed heavy. I opened it up, and discovered a nearly full sippy cup of milk (nearly fully because it was leaking)from our trip home from the beach on SUNDAY (Chris brought in all the luggage while I was feeding Ali, and so I didn’t pick up the lunch box to realize that it was heavy, and had forgotten that I had packed milk to travel). Take my word for it – 5 days of room temperature takes milk to a whole new level – it wasn’t cottage cheesy – it was sour creamy. I took the lid off, and had the still shake the sippy cup up and down to get the chunks to come out. And wow – it stinks. I mean, it STINKS. It had leaked in the lunchbox and on everything in there (napkins, a couple of Hershey’s Hugs, and a Nutrigrain bar), so I threw everything out and thoroughly cleaned the lunch box. Then had to really work to get those sour cream chunks to go down the drain (don’t tell Chris – he’ll freak about the septic tank). Note to self: Be sure and make a note to self when packing milk for Ali, to prevent the creation of sour cream. Ew.

1 thought on “sleepyhead and sour cream”