When I turned 15, I went to the DMV on my birthday, my anticipation too high to wait another day for the pleasure of being a licensed (learning) driver.

But I failed the written test on my first try.

I was mortified. Embarrassed. Humiliated. I made my mom swear not to tell my older brother, whom I was sure had passed his test with no problem.

(Although who knows – perhaps he’d likewise made my mom swear not to tell me that he failed it four times in a row. One can never tell.)

I was by far the more studious of the two of us, but I had assumed (poorly) that the test would be common sense, so didn’t exactly study the boring, small-print manual.

It was not common sense.

“When should you switch on your turn signal?

First of all I couldn’t figure for the life of me how I, a 15 year old, should be able to gauge with my eyeballs the difference between those distances.

Second of all, I assumed the longer the distance the better, so I chose the longest.

The correct answer was not, after all, the longest.

I was so very indignant over that dumb dumb dumb question.

They let me repeat the test the same day, and I passed – just barely. But it was good enough for me.

So as Ali approached the age of 15, I was not going to let my daughter repeat my embarrassments. I got her a driver’s manual months ago, downloaded the test practice app for her, and stressed to her my lingering abject humiliation at my own failures.

And to supplement the book learning, we’d been going to the parking lot of our local mega-church to practice driving with regularity, thereby making my daughter immediately look half a decade older. I already felt badly that her birthday fell on a Saturday, and thus she could not get her permit on her birthday (and I felt doubly bad that this means that her 16th will fall on a Sunday so she’ll have to go an entire 24 hours at the age of 16 without being able to drive independently.)

So I scheduled her an appointment for the next week.

But alas. My curse followed her.

I was not aware of the difficulty, the challenge, the absolute QUEST that it is to obtain a learner’s permit in the state of Alabama. And my brain had been rather scrambled for the two weeks prior, thanks to my finally falling to Covid.

…The state does not put the document requirements on the same website as the test appointments.

…The state does not provide a handy list of documents required in the appointment confirmation email.

…The state says, in fact, zero about anything with regards to documents needed in the second email, the appointment reminder email.

This is, in fact, a disaster waiting to happen to those recently scrambled by Covid.

So I, in my leftover fog, foolishly thought I simply should be prepared to prove her age, and so I was rather proud of myself for my forethought, taking her birth certificate with us to our appointment.

Although I’d been “cleared” from quarantine for several days, this was my first actual outing after being ailing and indoors for two weeks.

I do not recommend the Department of Transportation as your first outing after an especially ferocious bout with Covid.

We arrived, and there was a rather formidable Department of Transportation Enforcer of Documentation at the door, checking documents before allowing people into the building.

The gentleman in front of us had an entire portfolio that he had to go through with her, piece by piece, as we fidgeted and froze behind him. I began to get worried, but not entirely, because he was not a citizen, so she was checking all sorts of immigration and visa and N-394y7t50 forms and so on.

Surely she’s just going to wave us in after seeing we have a birth certificate…..right?

No. She actually spent about five seconds determining that we were entirely unfit for entrance, and rattled off the list of things we needed in order to come back if we wished to be found not lacking in her presence.

We left panicked and filled with a familiar humiliation (or at least I did.)

I had passed down my curse to my daughter.

Ali, however, was very upbeat and understanding, and even tried to take the blame upon herself, as she was sure those requirements were listed at the beginning of her driver’s manual – a list she assumed applied to an actual license, not a learner’s permit.

I spent the afternoon gathering documents, gaining advice from friends, and researching the best place to go to attempt our license attainment without an appointment, as at this point there were no appointments available for weeks. We would have to attempt The Dreaded Walk-In.

The next morning, we set off to a different office in a different county that was considered superior based on the survey of friends who had already suffered The Humiliations of the DOT.

We arrived 8 minutes before they opened, and joined the line of those waiting for bureaucratic slaughter. We gauged our chances of success. There were approximately 15 people in line in front of us, and two appeared to be 15 years old. We felt our chances of success were good – surely we would not be turned away to come back another day and/or commanded to procure an appointment.

When we were allowed inside, they immediately separated us, told me to give Ali all of her documents, and led her back to the a holding pen. I was left to wait and pray that I’d achieved optimal documentation.

Our friends were right – this was the correct location to visit. Other than two nervous escapes from her confinement to seek me out for money – $5 to take the test and $36.25 to pay for her license after she passed it (with a much higher grade than her mother) – everything went smoothly and we left the building, license in hand, 50 minutes after we had arrived. 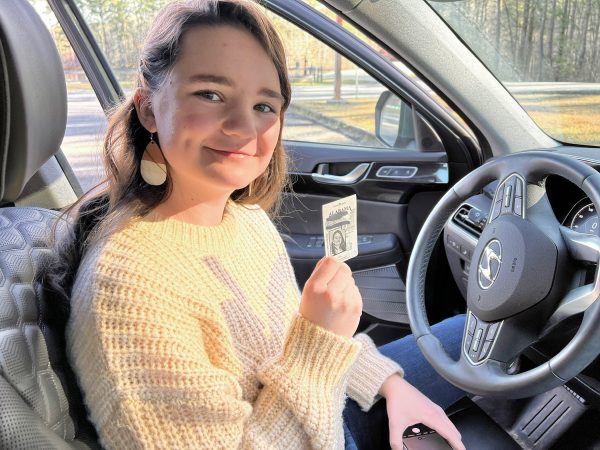 At Chris’ suggestion, I drove us to Oak Mountain State Park for her to take her first legal-on-real-roads drive. It’s the perfect road for it – low speed limit, 9ish miles long, little traffic, few intersections. We pulled into the petting farm parking lot shortly after the entrance and swapped seats.

She adjusted her chair, fastened her seatbelt, took a deep sigh.

And she started her driving career with the word “crap.”

(Which feels like it should be the first sentence of a book.)

The gravity of the moment and her age and the fact that she was about to be driving on a real road with other real cars was an overwhelming moment.

She drove around the parking lot a few times, then pulled up to to the actual road, ready to turn left.

I couldn’t help understand her sentiments 100% and agree in my own feelings a tiny bit.

But she went forth. And she drove. And the Curse of the Learner’s Permit was broken. 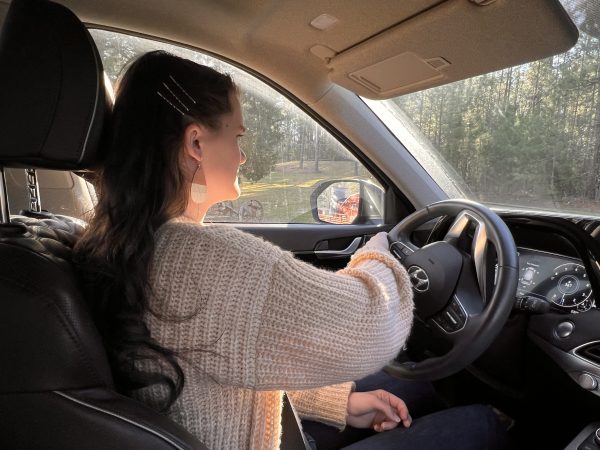 3 thoughts on “The Curse of the Learner’s Permit.”