I gave a speech this weekend to the AHTS (Alabama Hiking and Trail Society) about nurturing and encouraging children’s love of hiking. It’s way too long in its current format to share here (it was 45 minutes – perhaps the longest I’ve ever talked at one time ever), but in the process of writing it, and in particular in the process of writing the FAILS section, I found a story I wrote last fall but never shared here. And it really deserved sharing.

Our family stays at the Oak Mountain State Park cabins for a week every November, at that idyllic time of peak fall colors, crisp fall temperatures, and in general manic magic that happens when Alabama is no longer 100 degrees. This past year’s trip had been spectacular in every way. The weather couldn’t have been more lovely, we led hikes every day, we used the cabin canoes constantly, and we enjoyed every second. 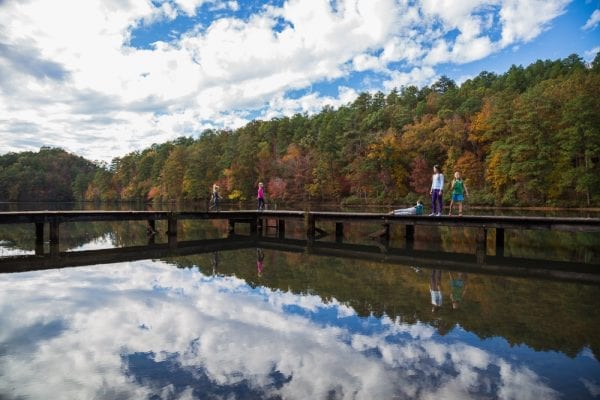 We had one last hike scheduled on our last day there, and it was to be our longest hike – a crescendo of perfection, if you will.

I never checked the weather. I had been lulled by the beautiful weather of the prior 6 days, and had also gotten used to life with one wobbly bar of cell service and no wi-fi in the cabins, and had very nearly become rustic in my addiction to information. The skies were blue! And the wind was so nonexistent that the lake was a gorgeous mirror! I vaguely remember Chris saying that it was supposed to rain that afternoon – late that afternoon – but that’s all I knew. 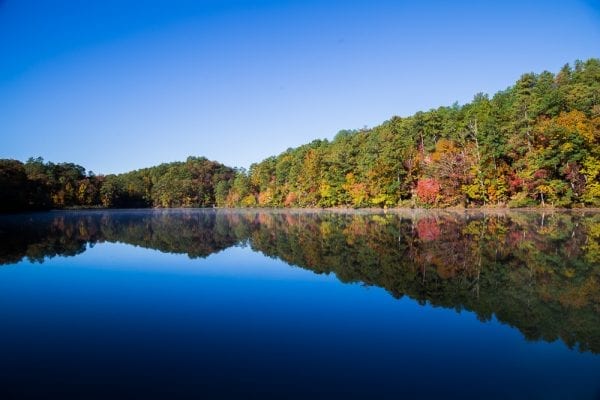 We gathered a few friends and drove up to the top trailhead so that we could one-way hike back to the cabins – because what could be a more delightful way to finish our week than a downhill one way hike on a lovely day.

As we approached the trailhead, I noticed the sky looked awfully gray all of a sudden. I pulled up my radar. There was rain coming, but the storm was well to the west of Tuscaloosa. No way was it going to catch us. I checked the written forecasts again – they were still saying late afternoon. And it was only 10:15. We were FINE. 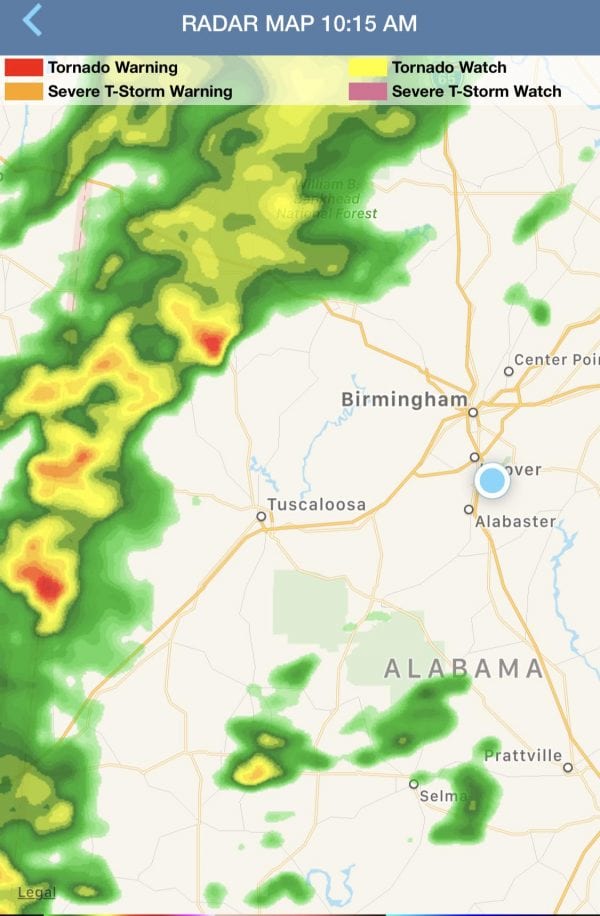 We started hearing thunder about two miles in.

“That was totally an airplane, right? There shouldn’t be thunder yet.”

But I noticed that storm was moving much more quickly, as if it had an appointment with a group of people in the woods that it didn’t want to miss.

We have several kids that REALLY don’t like thunder. They immediately looked at me with accusing eyes, asking what have I gotten them into and should we head back?

I wasn’t exactly sure how long the one way hike was, but I was pretty sure that we had time to make it to the cabins. Why turn around? Then we’d lose our net downhill.

Ten minutes later, a long, loud peal of thunder. I pulled it up again. The storm was now through Tuscaloosa and bearing down on us. And this storm had all the colors. Green. Yellow. Orange. BRIGHT BRIGHT RED.

I gathered and gently warned the kids.

“Okay. Just so you know…we’re gonna get wet. But we’re going to get off this ridge trail sooner than we planned, and we’ll be okay.”

…Because we were basically the highest thing for miles. Except for the trees. It’s never a good place to see off a cliffside when there’s thunder in the area.

We started picking up the pace. We kept on our ridge, nervously listening to thunder, trying to push through to the trail that would lead us downhill.

It began to rain on us around mile three. Noah began to get angry. He hates storms. He hates thunder. And, as he is in an extreme rule-following place right now, he DEFINITELY doesn’t believe in being in the middle of the woods during both.

The red trail is usually a boring wide road trail, but thanks to the exceptional fall colors and the full covering of fallen leaves on the road and the vibrance of color that the rain lended to said trees and leaves, it was SPECTACULAR. It didn’t matter that it was raining and there were now visible flashes of lightning and the thunder was most definitely getting louder. We had found ourselves in Fall Nirvana.

At least that’s how some of us felt.

Noah, not so much.

By now, he also had to pee. Badly. And he doesn’t believe in peeing in the woods, either. So now he was Rain-Angry and Pee-Angry and REALLY Thunder-angry. Soon he would be Sploshing-Shoes Angry as well but I didn’t tell him that.

We had a couple of miles to do before our next turn, which would then put us a little over one mile from the cabin. So, basically, a lot of miles in the increasing storm.

The thunder picked up considerably. There were deafening booms surrounding us, and we were sure lightning was going to strike in front of us at any moment. Noah was now crying with a ferocity that only hatred toward his over-adventurous mother could cause.

I checked the radar again.

Not only had the storm sped up, but it had tripled in width. AND THEN IT SLOWED DOWN. Now it was crawling along my radar, and just getting wider and wider and WIDER. There was no point in finding shelter – this storm was going to stick around for a while. So I just told the kids that the only way back was back, and the faster we went, the less of the storm that would reach us. 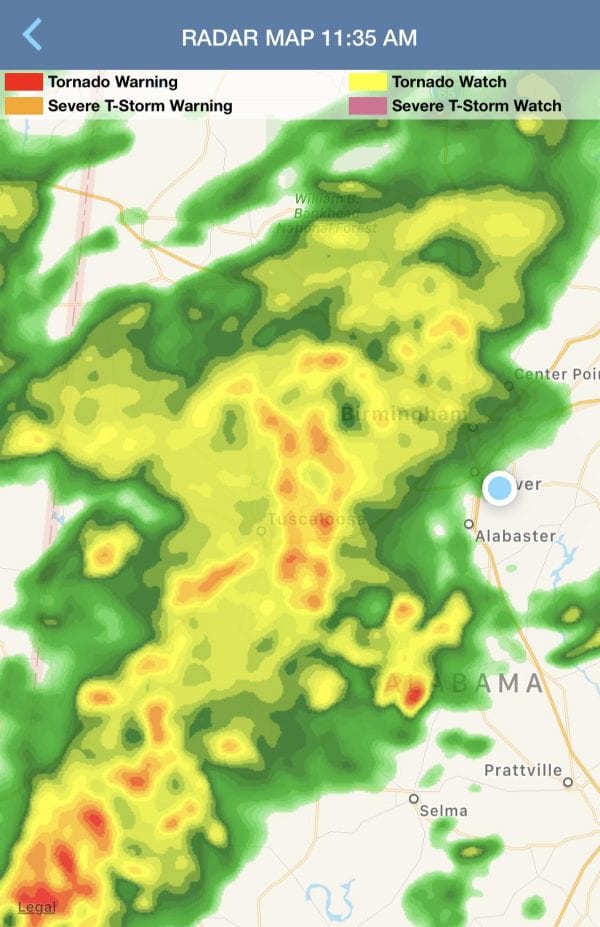 By the time we got to the Red/Yellow connector, we had arrived into the middle of the storm. Rain was now sheeting at us sideways, and the trail had immediately transformed into a rushing river.

So not only were we being deluged from the top down, we were also being sloshed from the bottom up.

Levi, Noah’s best friend, slipped and fell under the tide. He was now muddied completely and bawling.

But somehow, for just a minute, Noah miraculously rallied. I thought he’d found a new person inside of himself. He held up both his arms in weight-lifting pose, let out a primal scream, and yelled “ONE MORE MILE!! WE CAN DO THIS!! LET’S GOOOOOOO!!!”

Then half a minute later, he cried “THIS IS THE WORST DAY EVER!!!”

We scaled a couple narrow, high ridges with a long drop to the creek at only a slip of the foot. We made it to the half mile mark. To the quarter mile mark.

And finally, we saw it. The clearing. The promise of a cabin. Of warmth and dryness and coffee and hot chocolate. We sprinted for it, only pausing under the pavilion to take a selfie that might as well have been underwater, as wet as we all were. 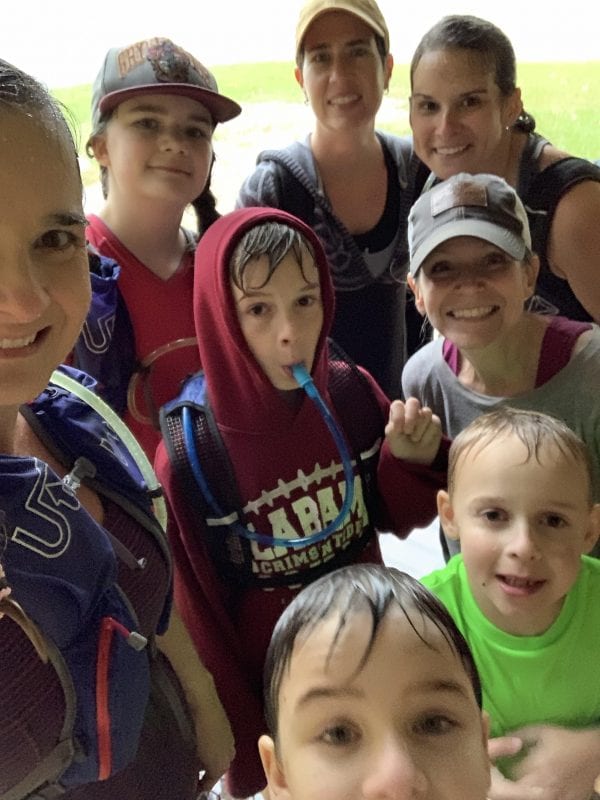 The mothers sat around reminiscing about our fabutastic adventure. Kelly was on the end of the spectrum of “THAT WAS AMAZING AND SO FUN!!!” Christen, who’s a little more cautious, had made fantastic progress since the last time we got caught in the rain. She was staring out the window, holding her coffee, saying, “I never panicked except that one time when… ——— !!! WHAT IN THE WORLD IS HAPPENING??”

She squealed out in horror, the caught herself and started hysterically laughing.

Kelly and I whirled around to see what was happening, and the big, oafy, old Ugly Duck of the lake (Rusty, as the kids had named him), was voraciously riding atop one of the tiny female mallard ducks, violently pecking at her neck and de-feathering her in the process.

The kids had heard Christen squeal and ran in to see what our next calamity was.

“MOM!! Rusty and that other duck are in a fight!! Oh! It’s over now. Rusty won, I think. Look at him strutting around!! His neck is so funny!!”

He was indeed walking the walk of the victorious, rhythmically gyrating his neck as he walked to show that he was absolutely The Stuff.

Needless to say, Rusty finished off our day with a bang.