A couple of weeks ago, Chris and I went on our seventeenth anniversary trip to Newport Beach, California. 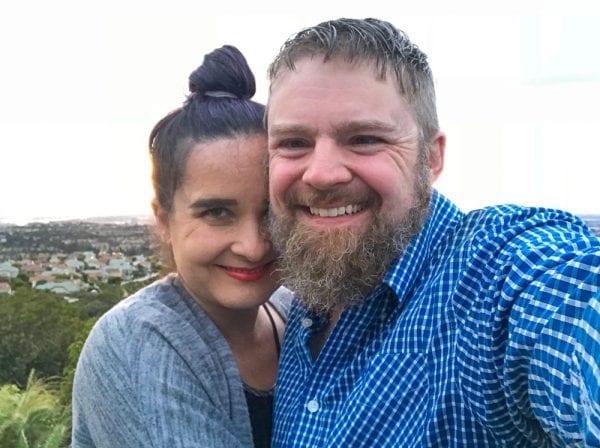 It was a completely random destination, chosen not by desire but by necessity, as we had reservations in St. Thomas, then St. Thomas went and got hit by two hurricanes. They cancelled our reservation and gave us a limited array of choices in which we could rebook. Which was fine, because we love choosing odd places to travel.

We chose Newport Beach because we went to San Diego a few years back and loved it (aside from me breaking my nose while sleepwalking, as one does, but that wasn’t exactly San Diego’s fault), and I’m always up for an excuse to visit California. Plus, there seemed to be some state parks nearby, and we are a bit on the active side these days when we vacate together.

We had no idea, however, that Newport Beach was the epicenter of south-of-LA wealth and snobbery.

I kept the Realtor app open as we drove around, just to gawk at the house prices, that ranged, on the beach, between 10 and 51 million. 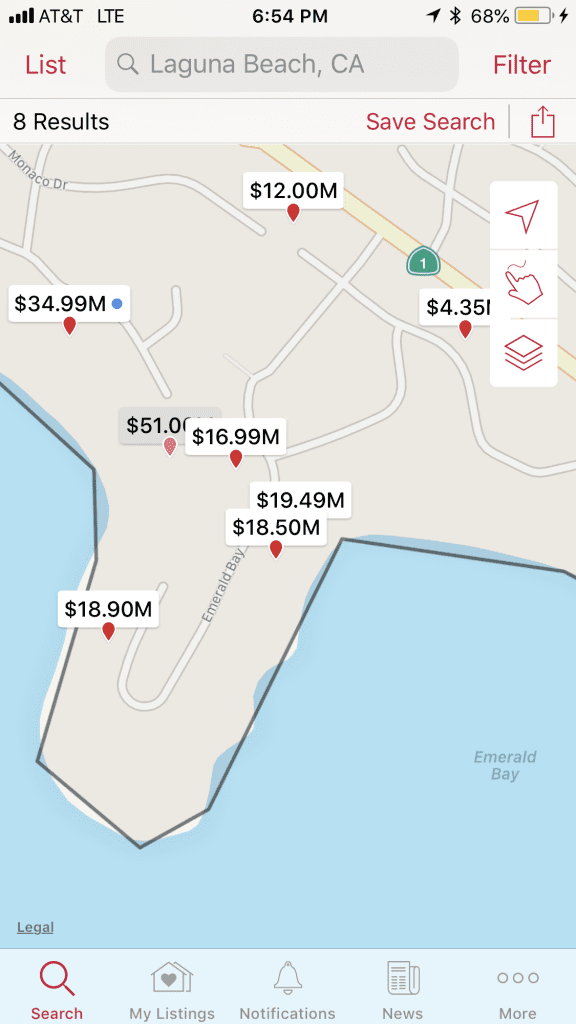 And the cars. The clunkers in Newport Beach are Range Rovers. The okay cars are Teslas. But really, life is only good if you’re driving a Lamborghini or Ferrari. My favorite was to take pictures of the orange “you’re going to get towed” warning stickers on the sides of these cars. Did they care? Nah. They probably had 10 others at home. 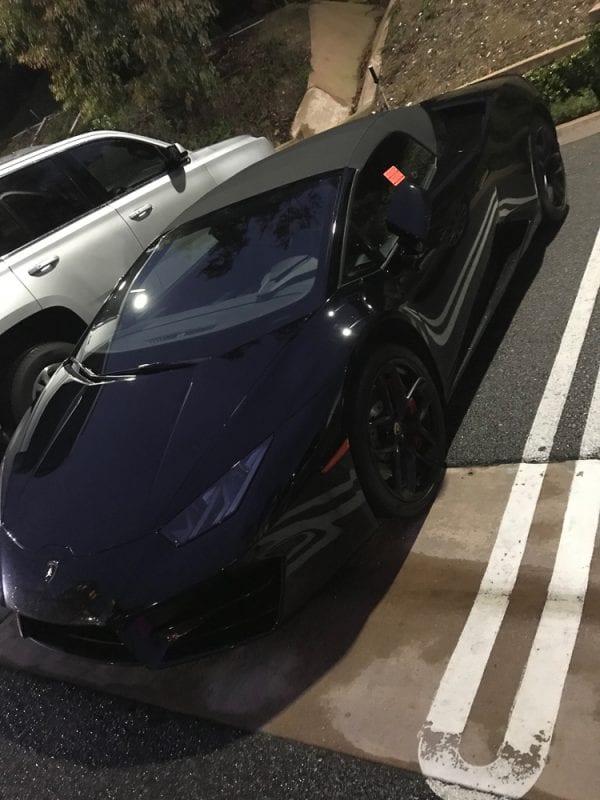 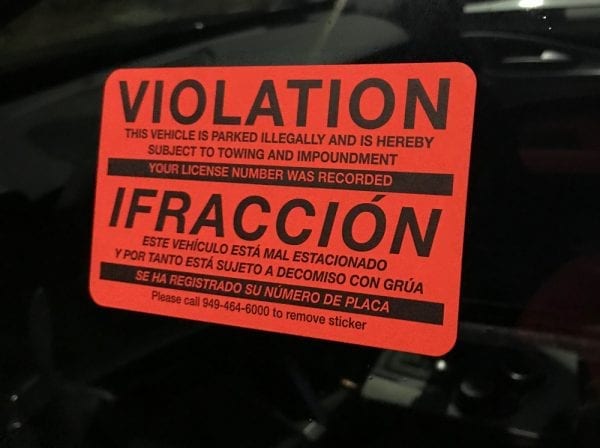 I learned the ridiculous array of performance SUVs that are now available – besides Porsche, you can get your SUV in Maserati or Alfa Romeo. Because there’s no better way to waste performance engines than having extra cargo space and a bunch of kids spilling their sticky fruit snacks in the backseat.

While the cars were fascinating, the people were perplexing. I caught multiple people staring – staring at me. In a judgmental glare. And when I caught them, they didn’t blink. They just kept stare-glaring. I spent the week trying to figure out what exactly it was about me that singled me out as DEFINITELY not fitting in.

Was it my purple hair? In Cali, I’m pretty sure purple hair is so 2004. In fact, did anyone in the entire town have hair a shade darker than white-blond?

Or was it my clothes? Could they tell that I definitely had never stepped foot into their minimum-$1,000-for-a-camisole boutiques?

Or is this what people mean when they gush about how southerners are just so nice to strangers? We don’t stare-glare?

I finally landed on hips. They had clearly eradicated hips in California many years ago (we realized there’s a such thing as skinny, and then there’s California skinny), and they were so shocked that I would still have such ancient things on my body that I might as well have been infected with a mix of Polio, Bubonic Plague, and Leprosy. And they were desperately hoping my hips weren’t contagious.

But let’s back up to our flight.

I love flying. It’s fun, adventurous, you get to see things from a new angle, and it’s a perfectly fine excuse to sit and read with zero guilt.

When the plane we’d be leaving Birmingham in landed from its previous flight, a Stewardess hurried off the plane first. As she walked out of the tunnel, she exhaled and said to the employee at the desk, “Praise the LORD we’re on the ground!!!”

This *seemed* like a bad sign to me. Was our plane a bit of a junker? Did they have an engine blow? What exactly made that flight worse than her other many every day flights?

When we got on the plane, it became apparent when I walked by row 16.

The smell of vomit was nearly visible.

Thank goodness the overwhelming aroma faded before row 18 where we were slotted to sit. But ohmygoodness – it was a full plane, and somebody had to sit on The Dread Row 16. They deserved a full refund and a year of free flight vouchers. I sat there, wondering what exactly had prompted what must have been a raging waterfall of puke two rows ahead of me. Was there turbulence, or did someone have Ebola? What was floating around at the microscopic level in the recycled air I was ushering into my body?

Our second flight, though less vomity in smell, definitely ramped up my paranoia. My stomach began aching. Hurting all over. Badly enough that by the time we landed, I felt like the only way to feel better was the hold my stomach together with my arms. It was not a familiar ache, and not one I could readily tell how to eradicate. Chris and I stopped at the grocery store and I began scanning the small medicinal aisle, looking for anything that might help a mysterious plane-plague stomach ache. I landed on Gas-X. Maybe I had expanded like a potato chip bag.

Sure enough, five minutes after inhaling those chewable tablets, I felt human again and my fears of Death-By-Plane began to abate. I googled this to see if it was normal, and I learned my second valuable medical fact of the week (the first had been the phenomenon of Asparagus Pee – did you know about Asparagus Pee? The science of who can and cannot smell and/or produce asparagus pee is well worth the NPR story.)

(I learned about this fact in my first ever highly specific and exactly correct answer to googling a medical problem. “Why does my pee smell absolutely horrible?” and Google suggested I might have eaten asparagus. And behold, I had just eaten asparagus for the first time in years!)

(Google is smarter than she used to be. Pretty sure five years ago she would have just told me I was dying of Malaria and left it at that.)

Back to plane gas, which was the second medical fact I learned – the gas in human’s stomachs does indeed expand like potato chip bags when in the air. It’s quite a normal problem and I was just the lucky one who had this problem but wasn’t forced by my body to embarrassingly relieve the pressure while on the plane (which is also, apparently, common.) Blinding stomach pain is preferred any day.

After I recovered from The Grand Expansion of Gases, the trip was just lovely (aside from all the stare-glares that seared their way into my fragile self-consciousness. But you Californians can’t help your rude ways. You just need to move to Alabama and learn some manners.)

Chris and I walked for five hours the first day, biked 20 miles the second day, ran and hiked the third day, and ran and hiked the fourth day. And oh yeah – got one more run in the fifth day before our plane left.

We tend to really relax on vacation these days. 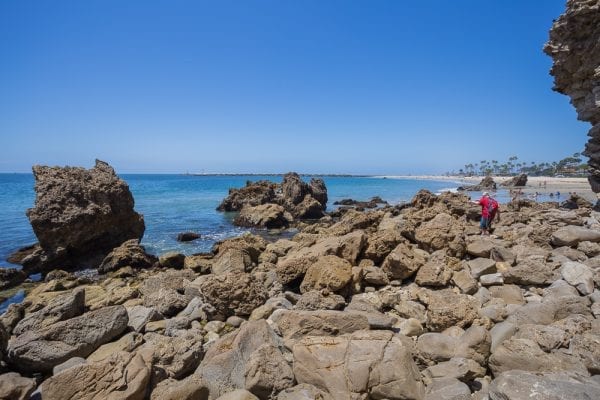 (We would have done more relaxing if it hadn’t been so dang cold, but you gotta keep moving over there. Unless you’re in a hot tub.)

(Which we did get in once. And we sat at the pool gazebos and watched the native bunnies eat the grass. And I read two books.)

The vistas of California were so breathtaking and vast that it was almost too much to take in. 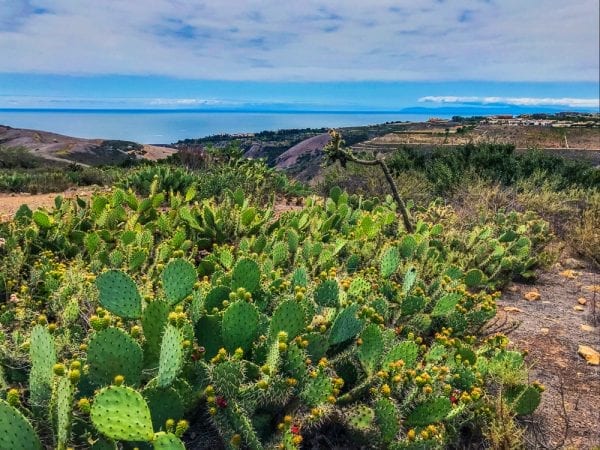 It was as if we were inside a postcard and couldn’t quite comprehend the depth and largeness of the canyons below us, the mountains above us, and the gorgeous sea. 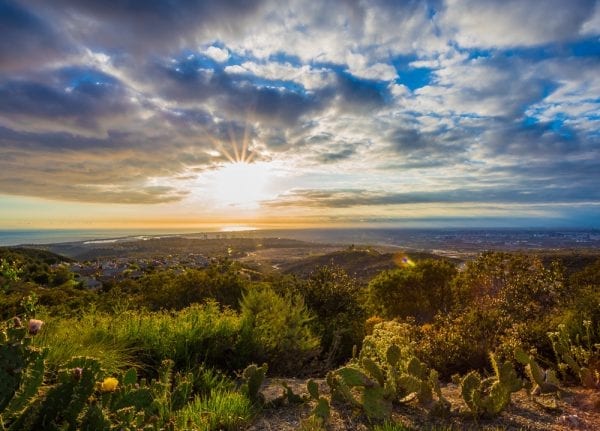 The mountains directly above the coastline were so steep that we’d count the number of times our ears popped while driving up them (seven times was the record.)

The sea life in the tide pools along the coast had gorgeous, colorful anemones and very busy crabs. 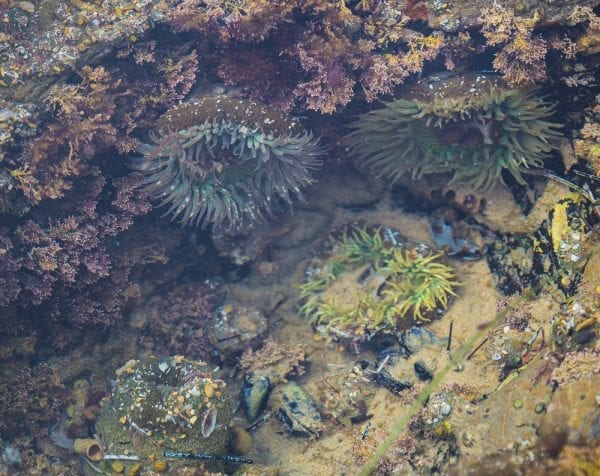 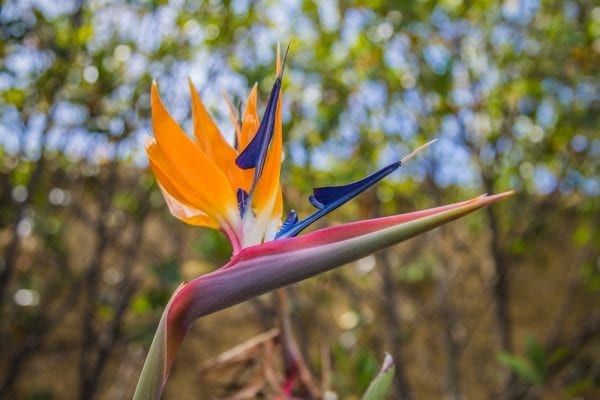 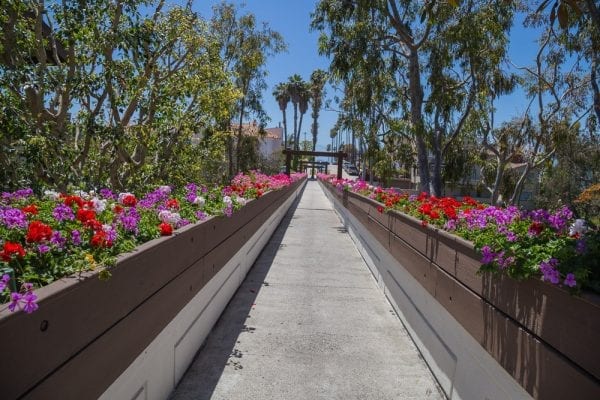 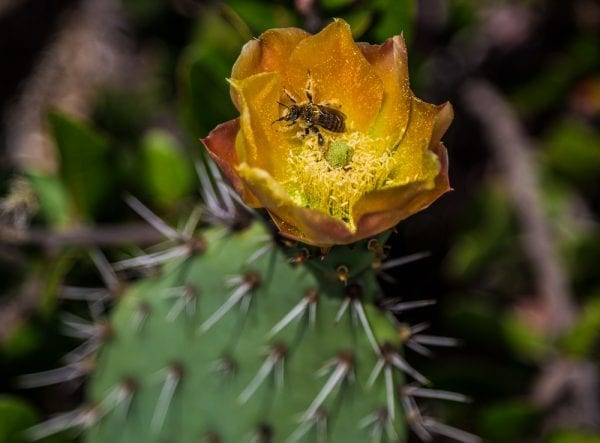 And then, Chris found me a Pirate’s Tower at which to take sunset pictures. Because he’s the best and that’s why I’ve been married to him for seventeen years. 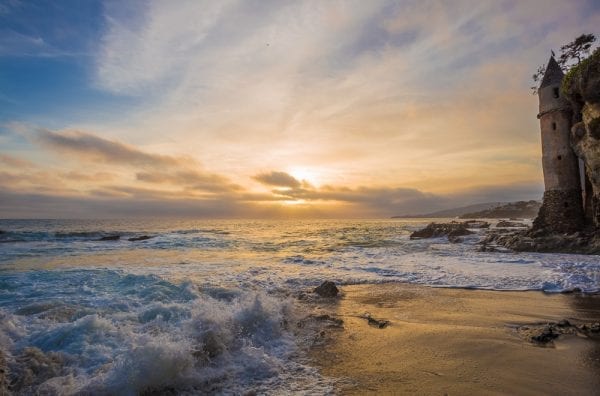 We had to park at the top of a hill, walk down a steep road, a few hundred steps, skirt across some giant rocks while the waves crashed into us, and withstand the tide coming in with giant waves up to our knees while taking the pictures. 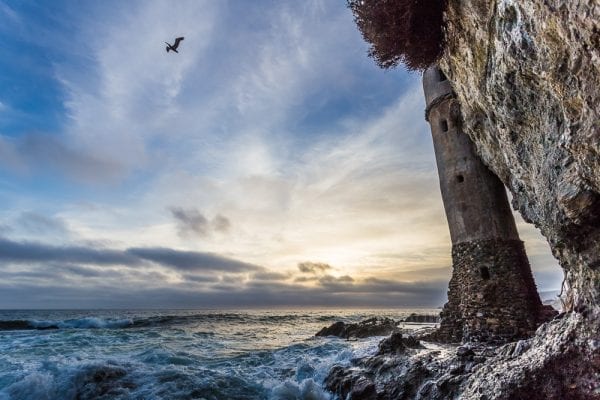 I had 20 pounds of sand in my shoes and have had to wash them twice to eradicate the smell of putrid fermented Pacific Ocean, but it was totally worth it. 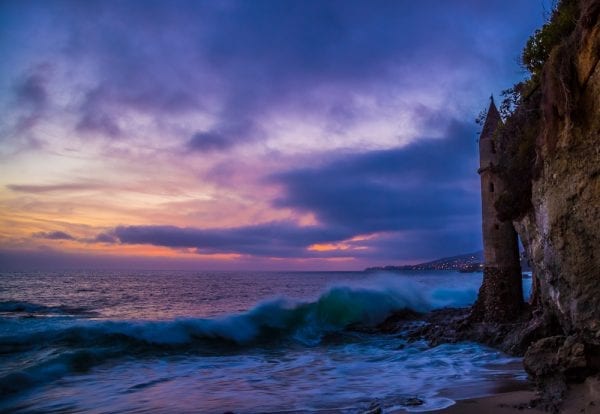 There were also ocean-flowing caves, 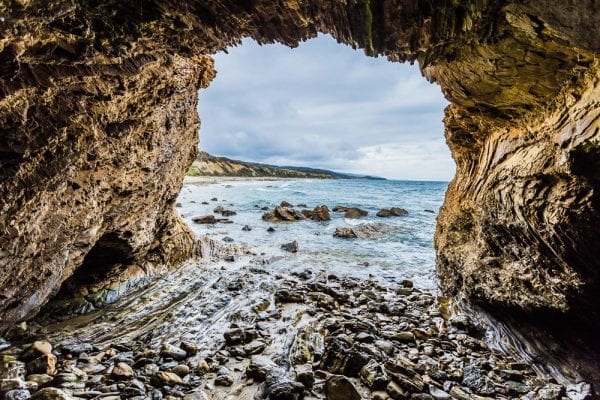 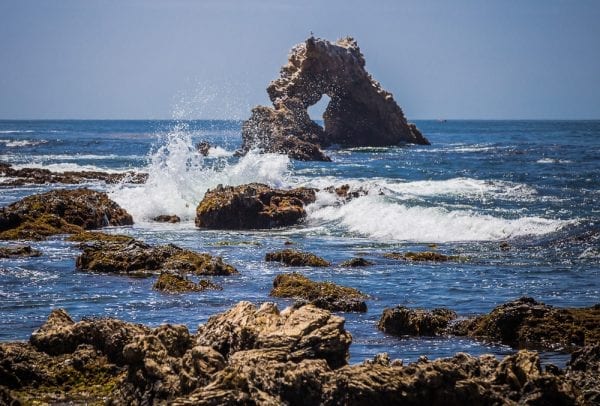 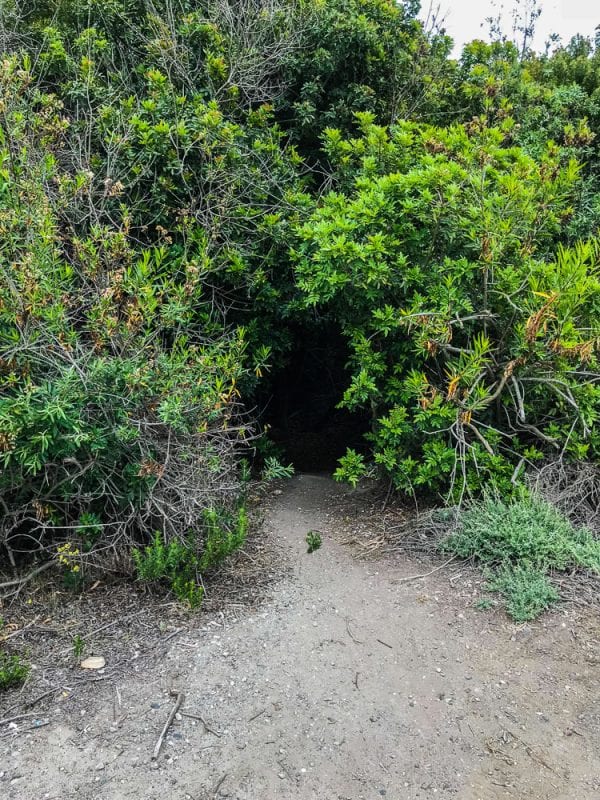 (Which turned out to contain a real live human “den” made out of sticks and twigs and graffiti and crepe paper, which can only lead us to believe it was a opium den, since opium is the only drug that requires a den.)

Speaking of California Oddities, we found this upper-crust society (to which we’re considering shipping Thomas The Cat), 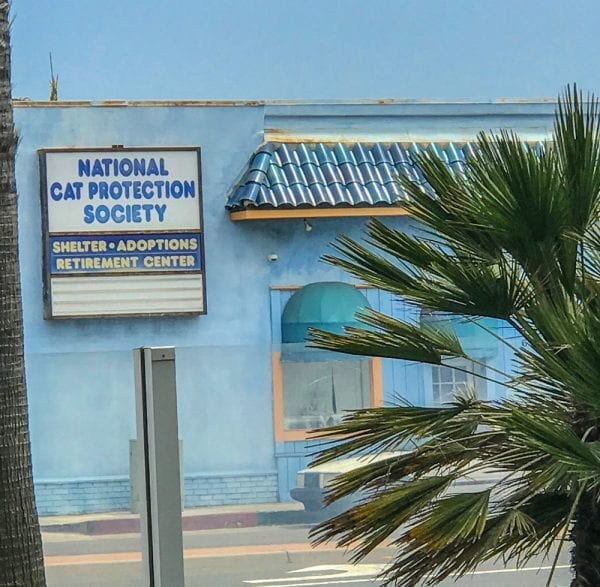 This ice cream shop that my kids would never be allowed to eat at, 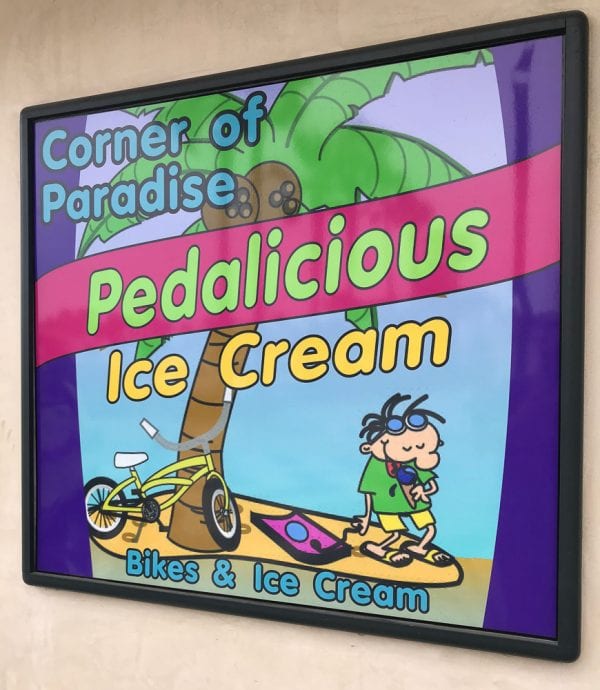 A Dad I never want to meet, 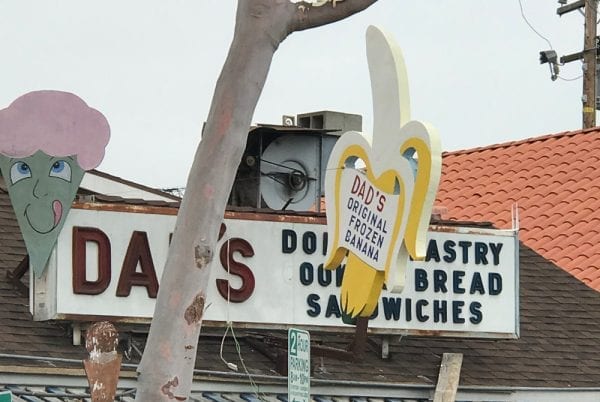 And “steaks” that would never be allowed to go by that name in Alabama. 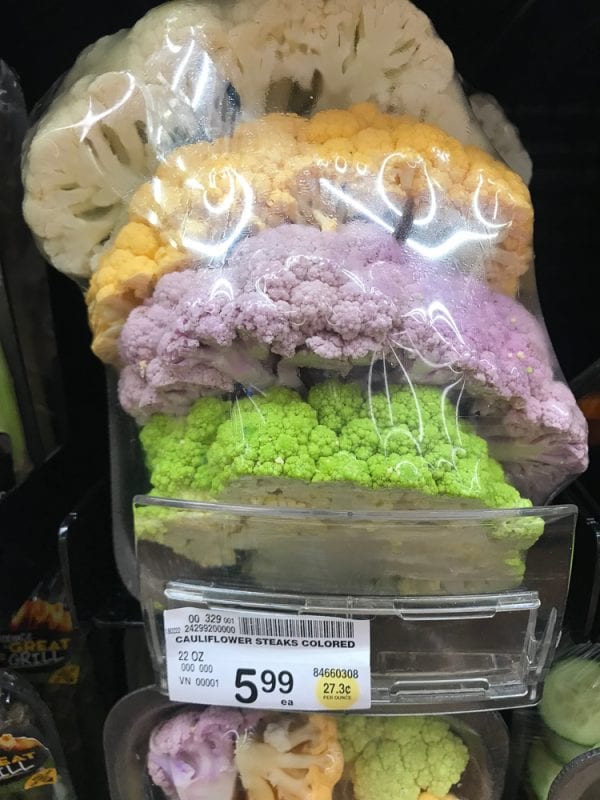 California was a lovely dream. 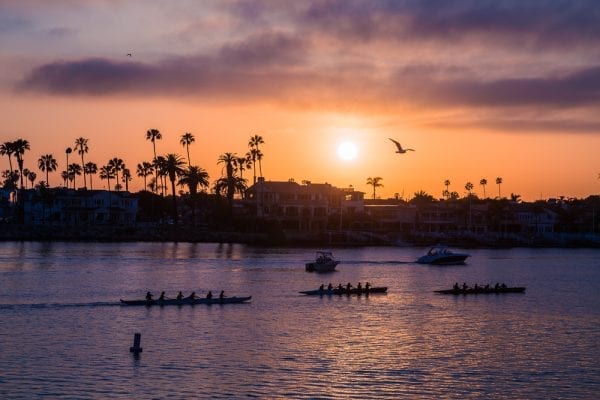 A dream I wasn’t at all ready to leave behind. 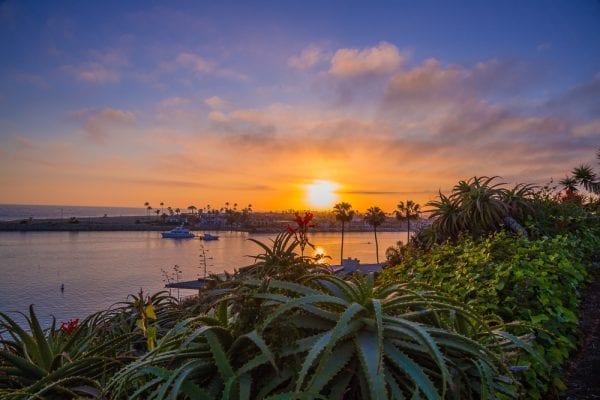 But at least I didn’t have Plane Gas on the way home.

8 thoughts on “The Varied Impressions of California, as seen by Alabamians.”