Noah’s most prized gift that came out of Christmas was his very own Noah-Sized Darth Vader. 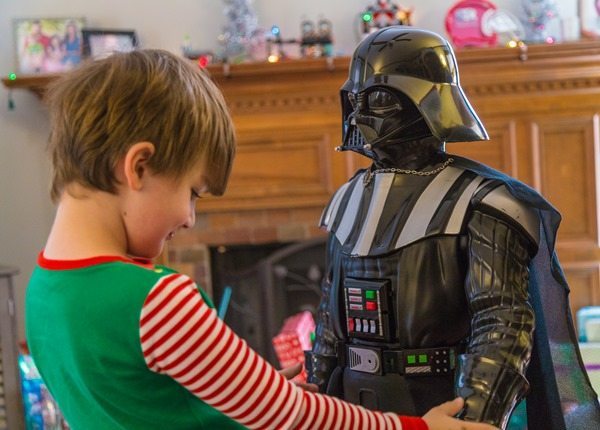 Darth wasn’t from us or from Santa, but from Tanya, who knew JUST what Noah was missing in his life.

Noah, who has been wearing a Stormtrooper costume daily since his birthday.

Noah, who told me pre-Christmas as I was putting him to bed, “Every morning when I wake up I have to fight Darth Vader for practice, because I’m just a Stormtrooper in training.”)

So clearly he needed a real Darth in his life. A Darth that is motion sensing and talks every time something moves. A Darth that has a friend mode and a foe mode. A Darth that was ready for the most adoring fan.

I mean. LOOK at that giddy grin. 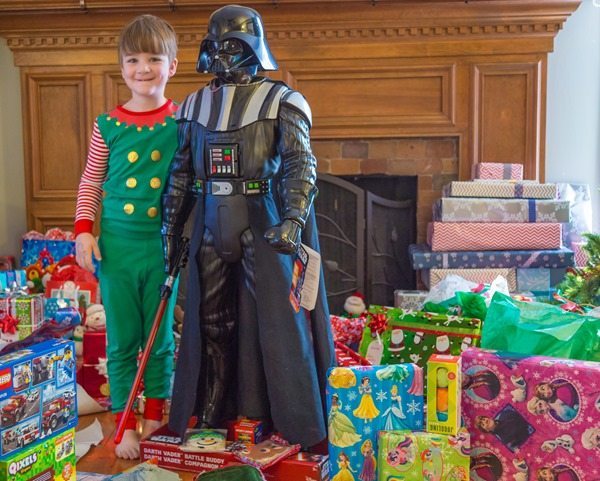 LOOK at those toes curled in with excitement! 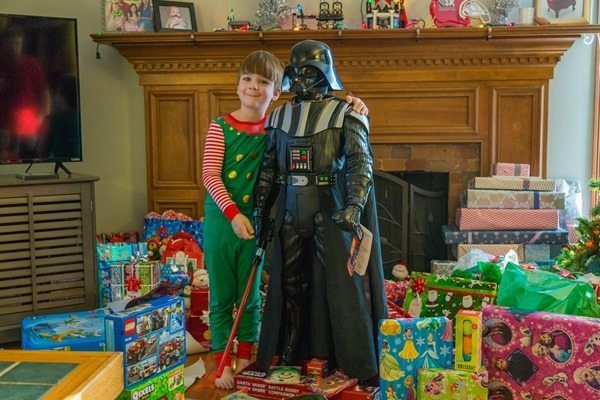 It was a match made in heaven. Or on the Death Star. Whatev.

But I didn’t go without observing that Darth could potentially be very beneficial to my own interests as well….

Which brings us to the day after Christmas.

I got a text from my ex-neighbor-still-friend Marliese. 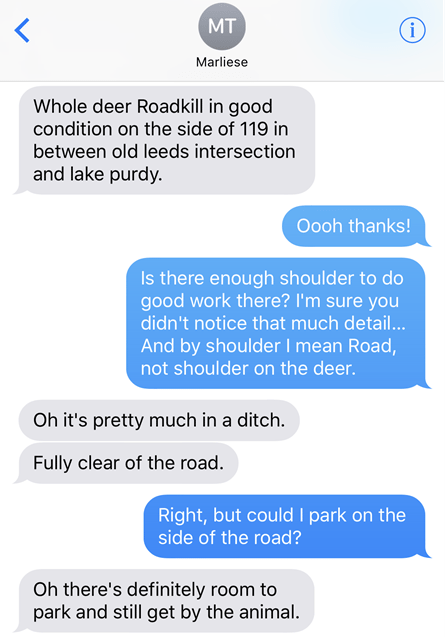 I did not currently have a deer in my collection. My checklist currently consists of:

● Sloppy the Squirrel
● Sunset the Armadillo
● Crunchy the ‘Possum
● A Lizard
● A Bird Head (With Spine Sticking out Mortal Kombat style)
● A smashed Vole on a Tortilla chip.

So far, I hadn’t repeated any animals. And I clearly and desperately needed a deer in my collection. 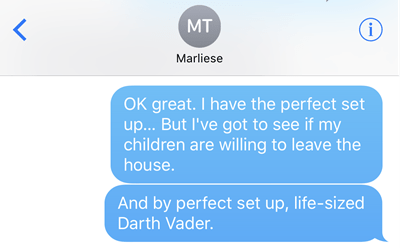 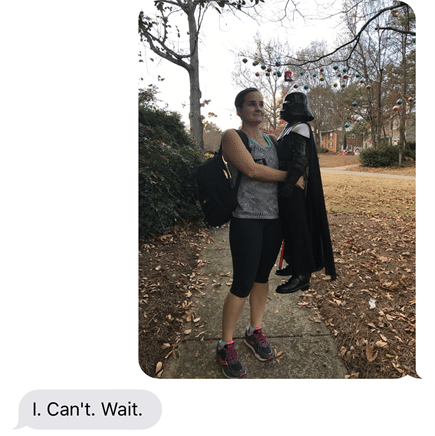 It is both a terrible and wonderful gift to have friends that encourage me in my most disturbing of hobbies. It is even more terribly wonderful when they provide me tips on where I can go to fulfill my darkest dreams.

It took a couple times driving up and down Highway 119 to find our new friend. Ali was the look out for the right side, Noah the left. Ali felt very concerned about what would happen next.

“I promise. I will be very careful.”

Finally, we spotted him. As promised, I carefully pulled into the neighborhood right around the corner – the neighborhood that even possessed an empty lot at which to park – as if it was made for a roadkill photography crew to set up shop. 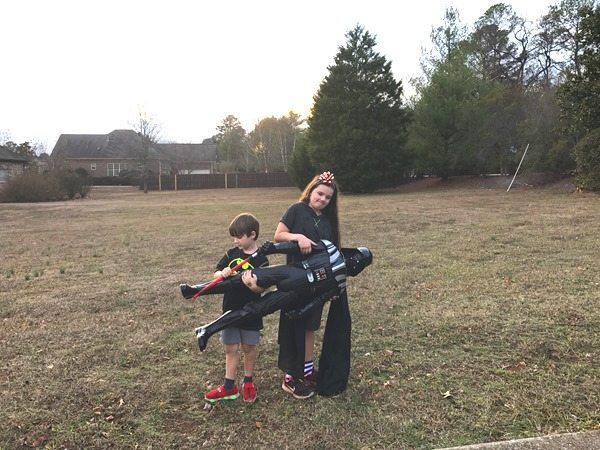 I grabbed my camera, and I gave the children their marching orders. 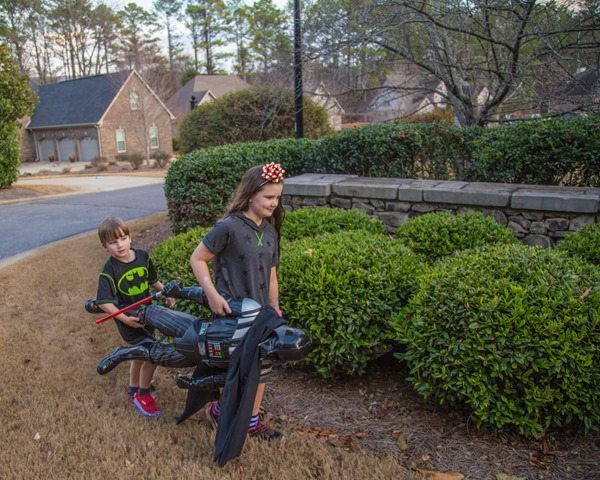 Darth’s motion sensing dialogue was in full-on manic mode as the children lugged him along the busy highway.

We reached the deer and did a general inspection of the scene. Marliese was right – he was perfect indeed. And he was a he – the tiny antlers that looked more like devil horns gave it away. We took a minute to be sad for him, then began the wait.

Thankful for the generous shoulder and some nice shrubbery for the children to play in (and me to partially hide Darth while I hoped for the amount of passerby to lighten), we waited and watched.

(Because I’m a wuss. I don’t want to be seen taking a picture of roadkill. Maybe I was scarred by the whole Crunchy incident.)

While I worked up my courage, the children slathered me with their usual onslaught of questions.

“Why are his eyes open?”

“He doesn’t look dead. What killed him? Where’s he hurt?”

“Can we get sick just from being near him?”

Finally, just to escape the Inquisition of Children, I braced myself and ran Darth to his prey. I placed him where I wanted him, I knelt in my photographer’s position, and started snapping.

I got all the angles. You never know which one is the one you want to end up with – even the Dark Lord of the Sith can have bad angles.

I ended up with two shots that meant the most to me, and quickly named the deer. 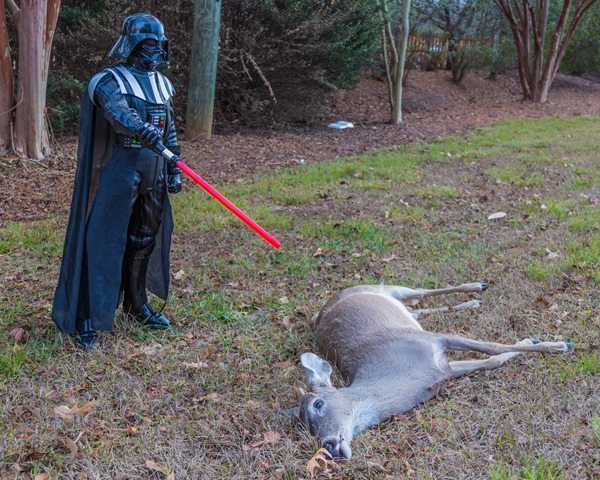 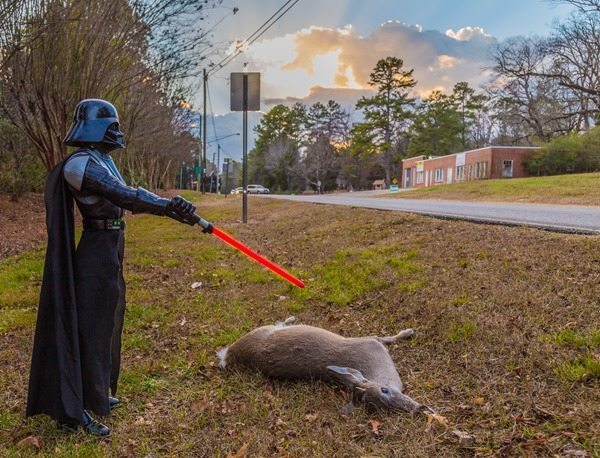 Ali was DONE carrying His Majesty, and left it up to Noah to gracefully escort Darth back to the car. 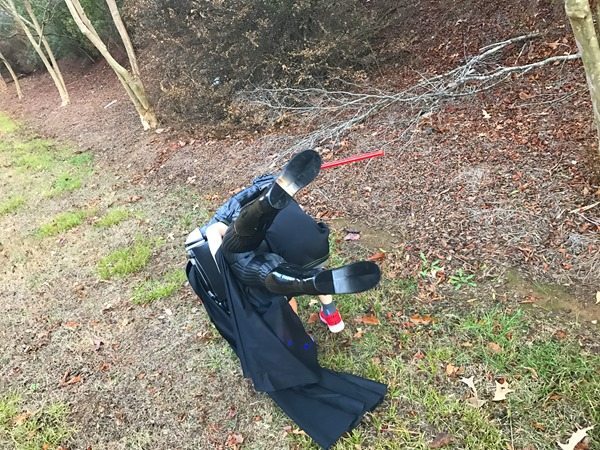 We shoved him in the trunk and quickly left the scene, forgetting that it might have been a great idea to switch off his motion sensor before leaving. All the way home we were gently, yet repeatedly, wooed to The Dark Side.

Oh Darth, if only you knew. 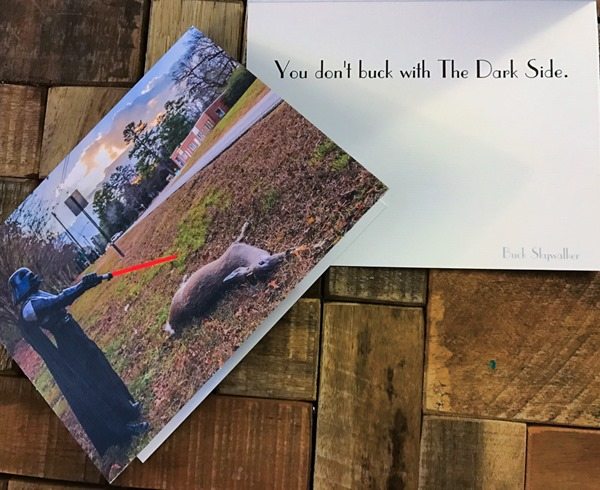 p.p.s. That night, still basking in the glow of the christening of Buck Skywalker, I decided it was finally time to create an Instagram account for my Dark Side. And so, @happyroadkill was born. It won’t get updated nearly as often as my main Instagram account, but when it does, I promise it will be worth it.

p.p.s. All of this occurred approximately 24 hours before the passing of Carrie Fisher. From what I know about her personality, I hope she would find it all amusing.

9 thoughts on “The Tale of Buck Skywalker.”