First of all. If you’re following our history journey to either emulate it now or later, I have recently discovered a complete game-changer: the dream series of books about Alabama history. I happened upon them at the Vestavia library, thought they looked interesting, and grabbed them to look at later.

When I finally pulled them out and began reading the prologue, I literally squealed with excitement. When I told Carla Jean about them, she might’ve cried.

See, here’s the deal. There was a journalist/editor here in Birmingham named Clarke Stallworth. He worked for The Birmingham News, and in the 70’s, set about writing a series for the Sunday paper about Alabama History. He wanted to make it come alive and tell about the characters and personalities behind our history, rather than just the dry (and often very unattractive) facts.

And goodness did he. Every chapter I’ve read has made me more and more excited about our History project this year. In Ali’s words, “Well HE’S quite dramatic.”

The fact that he wrote these weekly features for the same paper that is now featuring Ali and her walk through history feels too beautiful to be true. He was basically doing our project 40 years ago, sans the kid and the field trips.

(The Birmingham News articles about Ali’s journey through history can be found here online, and are showing up in the Life section of the Sunday paper roughly every week.) 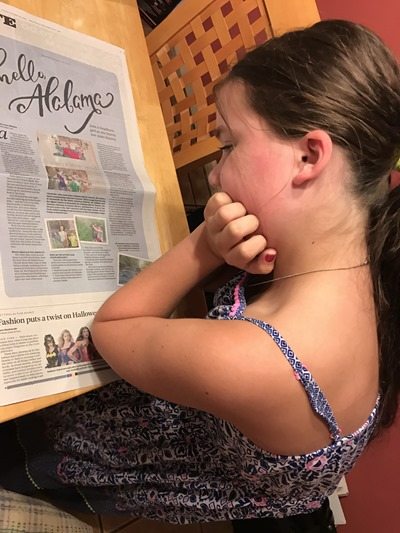 Mr. Stallworth’s articles were later compiled into three books, all out of print, but there are a few copies floating around at various libraries and used on Amazon. Here’s the library link for those of you in Jefferson County, but you’re going to want to own these books – Carla Jean and I both already bought all three – so here are the links on Amazon: 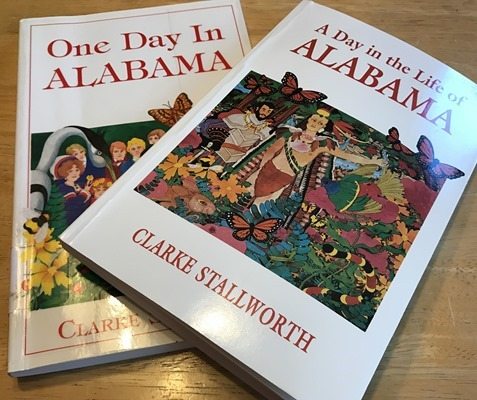 These books will be a favorite part of our curriculum moving forward, so I’ve added a column on my Alabama History Spreadsheet just to match his books up with our timeline. You can find an updated copy of my spreadsheet here.

Moving on…in this episode of Alabama History, we learn about how and when Alabama became a state.

The complicated thing about this project is that Alabama doesn’t exactly have the prettiest of histories (nor do most places or people, I presume.) When Carla Jean and I sat down at the beginning of the school year and discussed my objectives, near the top of the list was “present a balanced, two-sided view of Alabama history.”

This becomes pretty difficult for the first time right around the point of statehood, and more specifically, what precipitated statehood – the Creek Indian War. I reminded Ali that there are always two sides to every story and that people aren’t usually “bad” or “good”, then we read a couple of really great articles on the Encyclopedia of Alabama. At the end of them, Ali said “They did a REALLY GOOD job because I’m totally confused on who the good guys and bad guys are.”

But it didn’t take long to start feeling that it was most likely the Americans.

Ali had already been dismayed at how many times the British, and then the American Government, deemed it their right to take land from the Native Americans. So naturally she was relieved to find out about the Treaty of 1790, where George Washington PROMISED to NEVER take Creek land ever again . . . . (in exchange for 2 million acres of their land. But Still. Thanks George.)

Unfortunately for all of us in SO MANY WAYS, George Washington did not find the Fountain Of Youth and live to be our eternal president. And his successors were not so interested in honoring his commitments.

What started out as a civil war among the Creek Indians became the Creek Indian War. This war was won by the later-President Jackson at The Battle of Horseshoe Bend. That battle led to a treaty being signed at Fort Jackson (visited in our last Alabama History post) where the Creek Indians “agreed” to give 20 million(!!) acres of land to the US Government.

Those 20 million acres are now known as Alabama.

This smashing victory led to Andrew Jackson being celebrated as a war hero, and eventually to his presidency. During that presidency, he signed the Indian Removal Act, initiating the horrific Trail of Tears.

1790: George Washington signs a treaty with the Creek Indians promising to protect their lands (in exchange for 2 million acres of land, among other things.)

1814: As a condition of their surrender, the Creek Indians sign a treaty with Andrew Jackson, turning over more than 20 million acres of land.

1830: Andrew Jackson attempts to banish all Creek Indians, along with Chickasaw, Choctaw, Seminole, and Cherokee Indians, to Oklahoma.

(Note: all of this is rather oversimplified and leaving out the extremely gory details that I did not want to find while researching these facts.)

So of course, we visited Horseshoe Bend National Military Park.

Like Russell Cave National Monument, the children were given activity books to earn another Junior Ranger badge. 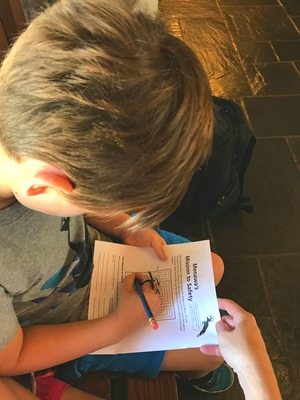 The museum was also great and informative, as was the movie you had to watch to earn your Junior Ranger badge. 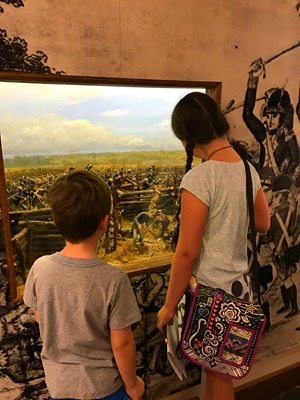 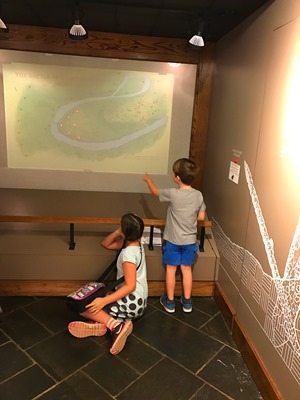 This is the battle field, the inner ring of the Horseshoe (a bend in the Tallapoosa River), that led to Alabama’s statehood, the loss of Indian land, and a eventually a presidency for Andrew Jackson. 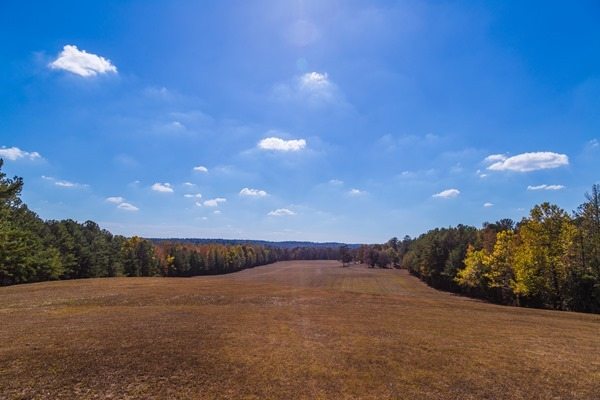 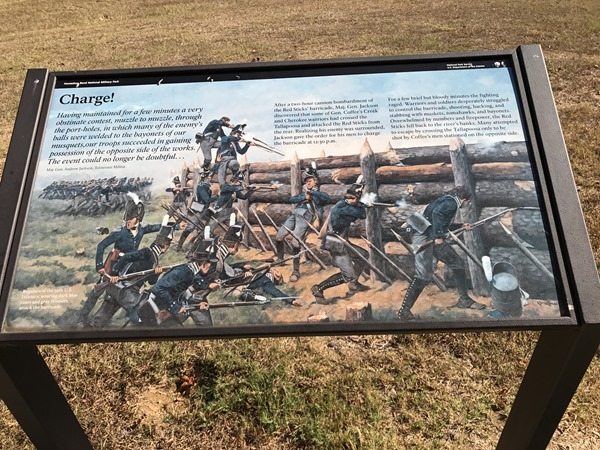 They built an awning at the top, with information about the battle. We discussed how it all went down, then the children moved on to the game of “Who can jump across the middle and land on the other side.” 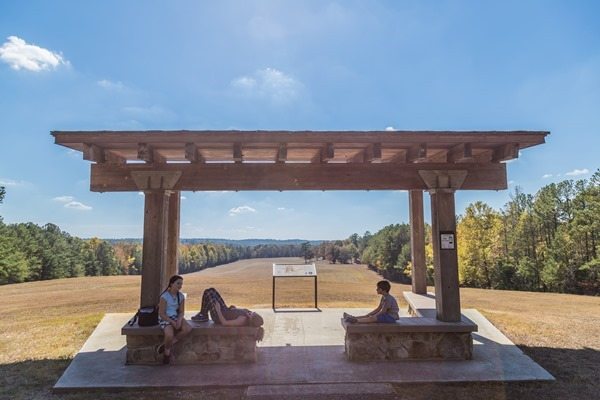 (That’s the nice thing about being a kid – even when history is pretty horrific, you don’t take it seriously for too long.)

We then went on what was supposed to be a short-ish nature trail, but ended up being much longer than we were told. 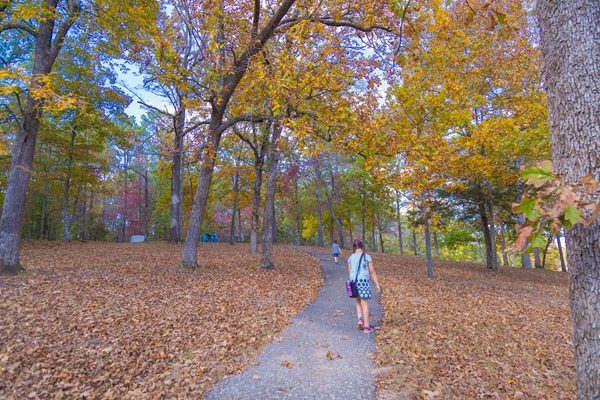 We enjoyed the beginnings of fall colors, 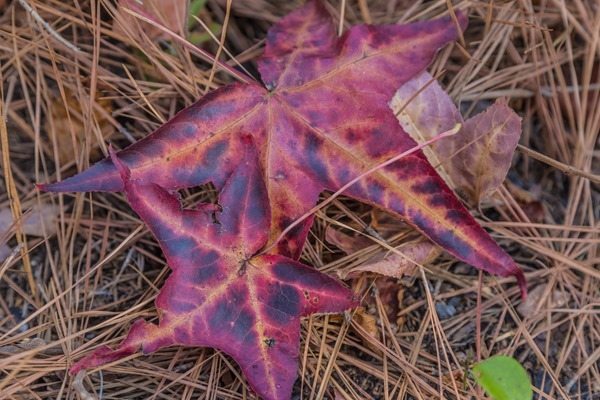 Tried to walk quietly like Native Americans and had a “walking quietly” contest, 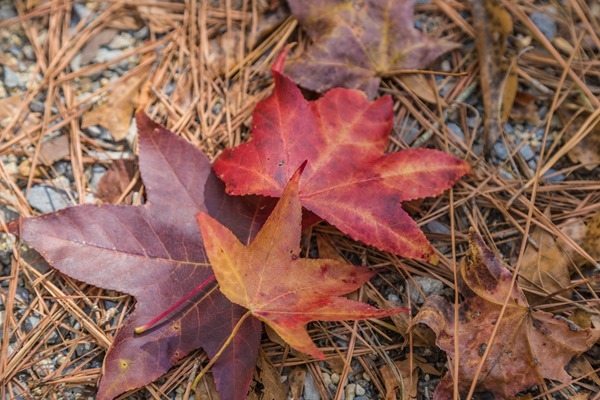 And then ran into this guy – the second Armadillo we saw on our walk. 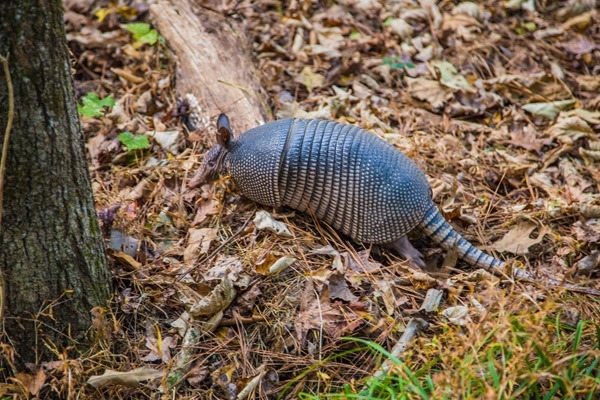 The first one came rolling down the hill toward us like one of Andrew Jackson’s cannon balls, then scampered off when he saw we wanted to take his picture.

But Arma #2 was more than willing to nose around in the pine straw at our feet for a good ten minutes. He continued getting closer and closer, completely unfazed by our presence.

Finally, Ali exclaimed, “He must be deaf and blind. He’s like the Helen Keller of Armadillos!!”

And there you go. My daughter made her first Helen Keller joke. Clearly we’re winning at Alabama History.

Later, we came to this gravesite – the first American soldier killed – the one who decided to first scale the wall that the Creeks had built. 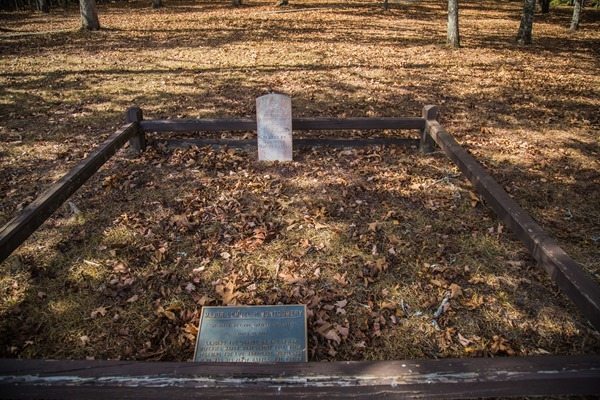 Noah studied it, then said to Carla Jean,

“Probably up there – where the gravestone is.”

“And where are his feet?”

“Probably down here. Where the plaque is.”

After laughing for a few minutes, we taught Noah that people are buried laying down, not standing up with their feet removed.

Near the blessed end of our hike, we found this old cannon. 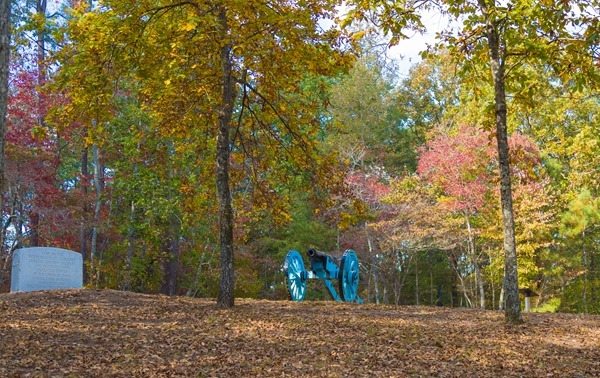 It distracted the kids (for a second) over the fact that they were both about to cry from exhaustion and heat (because this Alabama summer will never die.) 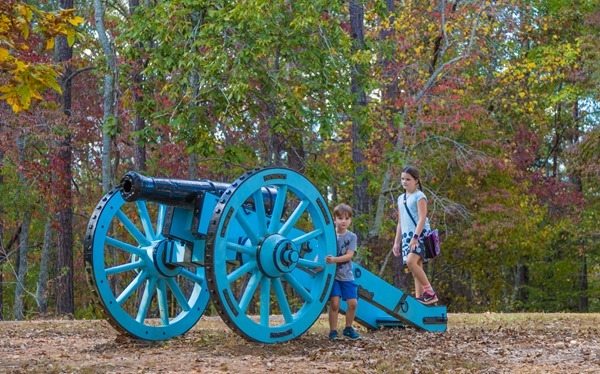 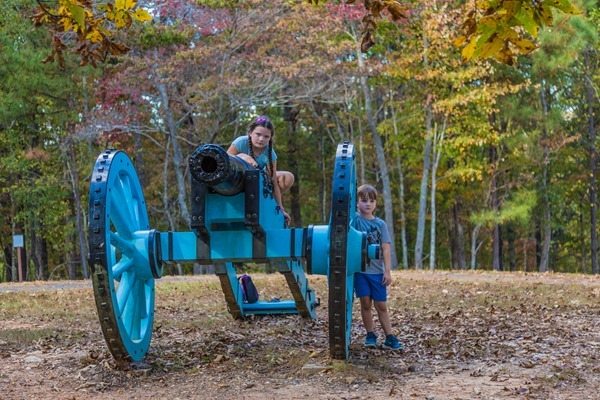 So, visit Horseshoe Bend. But beware that the 2.8 mile hike is more like 4.5. But hey – at least you’ll see Armadillos.

And, since she’s way better at summarizing than me, here was Ali’s report on the field trip: