WHY ARE CRAZY PEOPLE ATTRACTED TO ME.

Like, for reals. If I had to rate myself on a scale of Super Approachable to “Hazardous Area – Stay Away”, I’d be on the “Nuclear Waste – Clear the Area” end of things. Not by choice or plan – I just think my resting unapproachable face scares people away.

But not the crazy people. For them, I’m like an out of context bible verse Facebook meme. I’m like aluminum foil and newspaper clippings. They can’t help but be drawn to me.

Today, I took my children to Arby’s, because I told Ali that she got to pick where we’d eat lunch because we were leaving the Orthodontist and she had a sore mouth. Furthermore, I broke one of my highly held tenets of my Motherhood Theology (my expanded Motherhood Statement of Beliefs and Doctrine will be coming soon to a post near you) and actually took my children inside to eat at a fast food restaurant.

My justifications for this unpardonable sin were tri-fold: it was ridiculously hot outside, we had a bit of time to waste before an appointment, and I was hungry and therefore weak in the faith. I was ripe to be tempted. I was in the wilderness. And I failed.

So we went inside. I ordered our food, gave Ali her cup, fixed mine and Noah’s cup, and grabbed our order from the counter. Noah had already found us a table and was waiting calmly. This is one of those moments where I remember yet again that 9 and 5 are seriously good ages.

But yet, despite the general helpfulness and calmness of my children, as I was passing by a table of paint-splattered blue collar men, one looked up, gave a low whistle, and said, “My GOODNESS does she have her hands full.”

Now if he meant literally, I guess he was right. I had a tray in one hand and a drink in the other.

But people never mean that literally. They’re always talking about the fact that I did what people have been doing for centuries and actually gave birth to miniature humans, and was, in fact, not afraid to venture into the outside world with my inconceivably difficult lot in life.

Every time someone says this to me, I really feel the need to stop and tell them about my friends who have five, six, and even SEVEN children, in hopes of making them pass out right there in the middle of their roast beef sandwich.

But nevermind. That guy wasn’t the crazy person that this story is about.

A couple of bites into our lunch, I heard a raving voice. It was a very distinctive voice – kind of hoarse, but overly loud. A minute later, the voice rounded the corner.

It was an employee.

She walked up into Arby’s curious little mezzanine so that she was directly above our table. She leaned over the railing right above our food and yelled in her hoarse, carrying-across-the-restaurant voice.

“You have some good kids!”

“Thanks…” I tried to take a bite of my sandwich and move on.

Then she pointed to the table ten feet from us.

“Those over there aren’t good. There are too many of ‘em. They’re too much work. But you have some good kids!”

I tried to disappear into my sandwich unsuccessfully. She walked away, and I stole a glance over at the “bad” table.

It was a mom, a dad, a grandparent, and three little boys – a baby, a toddler, and a kid Noah’s age. One entire mini human more than I possessed. They were all sitting there quite calmly, eating their roast beef and trying to pretend they hadn’t just heard Arby’s Insane Employee Of the Decade.

While we ate, I tried to pay attention to the goings on at their table, looking for clues as to how I’d so easily risen above them in the Arby’s Circle of Excellence in Children.

I couldn’t figure it out. They had a 1:1 adult/kid ratio, the baby had a couple loud noises but nothing unexpected and not even anything that could be considered a cry. The toddler was sitting in his chair better than Noah was (who spent most of his meal sitting above his seat on the Mezzanine floor, resting against that gold barrier that had blessedly been strong enough to keep Batsoid from falling onto our table during her rant.

A few minutes went by, and Nutty Beeffessor was at another table ranting, again about the bad table.

“Somebody needs to tell that Momma and Daddy that those kids need to SIT DOWN AND SHUT UP!!”

The kids WERE sitting down, and fairly shut up.

I was so confused.

Is this what too much Arby’s Sauce does to a person?

Or had too many people rung that bell at the door for good service and it had blown a circuit in her cerebellum?

Or….wait a minute…could she be seeing a table full of children that the rest of us couldn’t see?

This became my best theory.

It all made perfect sense now.

And could someone please sneak some antipsychotics into the Jamocha Shake machine? 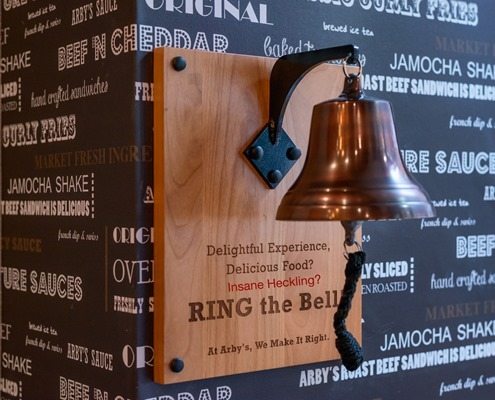 4 thoughts on “What was Said at Arby’s.”