On Saturday, we went on the newish-annual Road Rally. 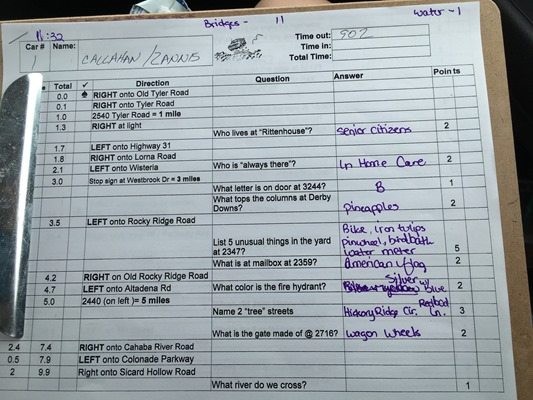 This isn’t new for my family, as my Dad has driven in epic road rallies (like, China-to-Paris epic) and has created many slightly-less-epic road rallies for different groups pretty much our entire life. But last year was the first year he revived the practice to share it with our Sunday School classes.

It’s the most fun you can have on a Saturday morning.

When in creative mode, he and my Mom spend countless hours concocting a course on sometimes harrowing back roads (there was one road…that was decisively one-lane…but was meant for both directions of traffic…and containing many hairpin turns. And of course I had to meet a car coming the other way on that hairpin turn. Newsflash: I still have last-year’s-wreck PTSD.)

The way my Dad’s Road Rallies work is…

– You don’t know where you’re going,

– You don’t know how long it will take to get there,

– But you get penalized for being more than three minutes early or five minutes late.

He hands out directions and an overall average speed that you should shoot for, and from that, you must derive your arrival time. Oh – and all while answering sometimes very tricky scavenger hunt clues along the way (which is the fun part.)

This year, Chris had already signed up for a half marathon, so Not-Crazy-Renee was going to go with me (which would have, I’m certain, created a new Not-Crazy-Renee story), but her kids just had to get sick. So instead, we had an in-family insanely complex distribution of children, drivers, and navigators, as follows:

– My brother drove. My brother’s navigator was his friend, coincidentally the father to Johnny. They took my brother’s two-seater convertible, cruising along the back roads with the wind gently massaging their scalps. While we had four kids, one of whom said, less than a mile into the rally, “Hey how much longer is this gonna take because I’m getting bored.”.

– It is also worth noting that the reason my brother’s friend came along is so he could give his wife the day off. I would like to make sure that it is noted, dear Johnny’s mom, to not give Johnny’s dad complete credit for your day off. Although Johnny was a complete gem and adorable rallying companion, I had Johnny for 3 hours and 20 minutes of your day off while Johnny’s father was riding around in a topless car getting his hair tickled by the wind.

Now that we got that out of the way, spoiler: WE BEAT THE CONVERTIBLE DADS.

And yes, we got extra points for our tiny baggage (1 extra point per kid under 7 and 1 penalty for each kid over 7, giving a total of 2 extra points), but WE EVEN BEAT CONVERTIBLE DADS WITHOUT OUR EXTRA POINTS.

(For the record, we came in second place.)

(But all that mattered was beating the convertible dads.)

By the way, if I can find the time, I’m considering creating a road rally that maybe would take the course of some of my favorite Instagram spots. Who local would be interested in participating? 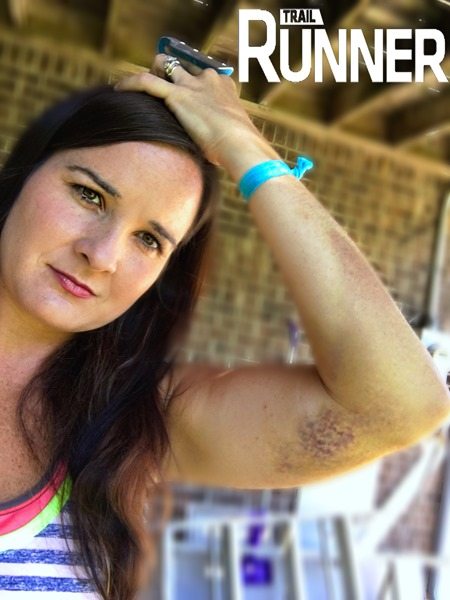 “You too can look like me – with a little trail running experience. And by little I mean VERY LITTLE.”

All of the bruising, which I am indeed proud of, is actually from internal injuries – that part of my arm did not hit the ground. 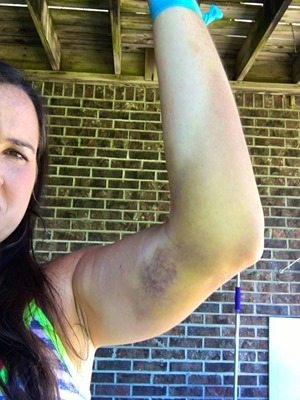 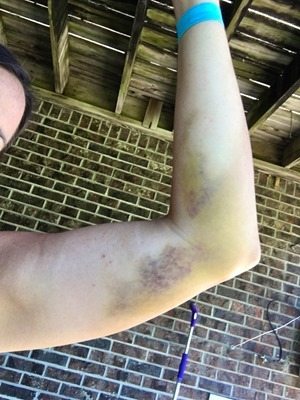 Which makes me all the prouder.

…Because if I’m going to be injured, I might as well find something to get excited about.

(My elbow is feeling much better, although my physical therapist says my professional baseball career is over. My shoulder is slowly getting better. There are two directions that it gets VERY ANGRY about bending. One of them being the angle one must assume to take a shirt off. So that’s convenient.)

As far as my finger, the only thing I actually broke, it’s fiiiiiine. Other than being faced with the perplexing dilemma of what one does if they accidentally dip the tip of their finger splint in the toilet while they still have 8 days left of wearing said splint.

(A hefty scrubbing of antibacterial soap is what one does, in case you wondered.)

(Feel free to decline any dinner invitations to my house until I get my splint off next week.)

I republished one of the only posts I ever deleted. It was a jewel – I just published it “too soon” originally, and deleted it two hours later out of fear/guilt. If you missed it originally (or if you just wanted to re-read it), you can give it a go here.

Ali was disturbed when she realized her little brother had more wealth than her.

She wants to make money. This is very crucial to her long range plan of being very very rich.

So she asked me if I could please think of jobs she could do to make money.

I mean, I can give her all the normal kid jobs of unloading the dishwasher and sweeping, but more importantly, I’m thinking…

– Bring me breakfast in bed for the summer, .50 tip per day (.75 if you deliver it with a small piece of chocolate.)

– Learn how to perform a proper back massage and foot massage via YouTube, practice daily on your mother – .25 per massage.

– Read some parenting books and figure out how to get your little brother out of his narcissistic phase – $25, plus the added bonus of having a more personable little brother.

– Research recipes on Pinterest, create grocery lists, and teach yourself how to cook – $7 per meal.

She’s already working on a prototype spreadsheet to track her receivables – clearly we still have some fee negotiations to handle. 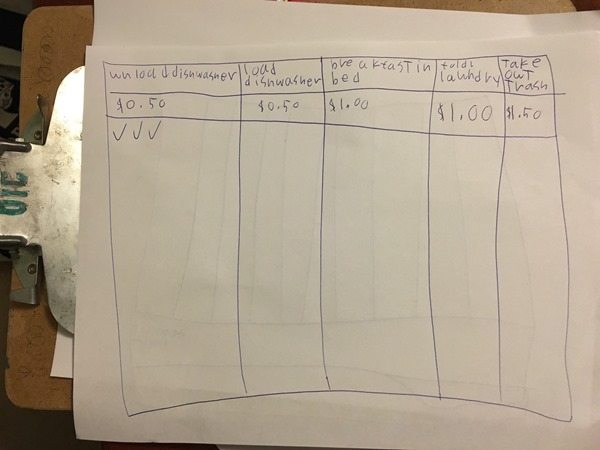 But regardless, my summer is going to be AMAZING.

7 thoughts on “Short Stories From A Busy Week.”