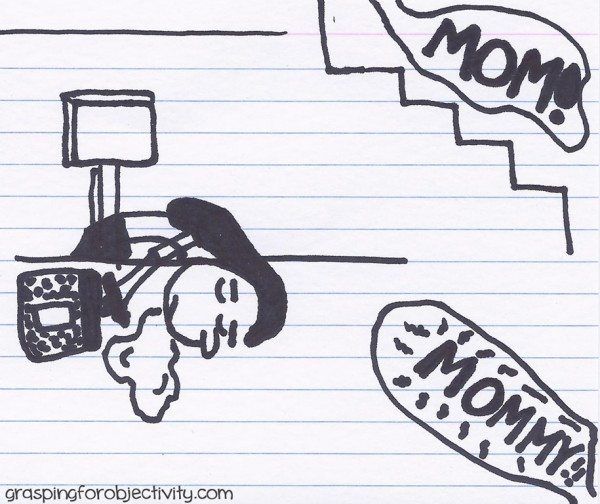 This post felt like I’d taken two familiar genres and thrown them into a smoothie together: my Diary of a Tired Mom posts, and my friend Katherine’s madly fantastic Uncomfortable Truths, which has  66 volumes (and counting.) Be sure to read hers, because they’re delightfully more uncomfortable than mine.

Although my elbow and shoulder (and finger) are slowly recovering, they’re still annoying. I mean, it is my left hand. And I am left-handed. But way more annoying than having three separate injuries on my dominant arm is the fact that it is also my drive-thru arm. It’s hard enough to be a professional Chick-Fil-A Speed Receiver – but try doing it with only one arm.

My game has been decimated.

(Seriously. Next time you’re at the drive-thru, try doing all transactions with your right arm. It’ll make you appreciate the left side of your body so much more richly.)

(And anyway. Who needs to actually write with a pen in this day and age anyway. The ability to accept fast food is way more crucial.)

The British add a lot of unnecessary letters, right? (I get that the US of A became a nation a couple years after the United Kingdom but spelling wasn’t normalized until we were both around so I blame them for saying “yeah, let’s shove all those extra letters in.”)

There’s labour and flavour and colour and foetus.

But the most disturbing of all extra letters the British chose to keep is in a word already fraught with unnecessary characters.

Without a doubt, it goes to diarrhoea.

Somehow this unfortunate British spelling got stuck in my head and that extra o – a round circle surrounded by two cheeks of burgeoning letters – haunts me. And every time I mentally say diarrhea, (which is more often than I’d like thanks to having two children and a husband and being human and all,) I also add the o in there, mentally saying dia-ROY-a, as I imagine a countryside British farmhand would say.

“This ‘ere mare’s got tha dia-ROY-a again. Best be givin’ a ring to Doc Herriot.”

I recently had the joy of possessing a rather stubborn UTI. After a couple rounds of antibiotics, I went to the doctor, where they loaded me up with drugs – both the antibiotic and the UTI kinds. As she handed me samples of the UTI drugs, she said, “Now don’t be alarmed – this WILL turn your urine a bright blue.”

Well THAT’S different. I mean, AZO is entertaining enough, with it’s orange-maroon color (which incidentally looks just like the colors of the Virginia Tech Hokies – the students should all take AZO as a show of team support before football games.) 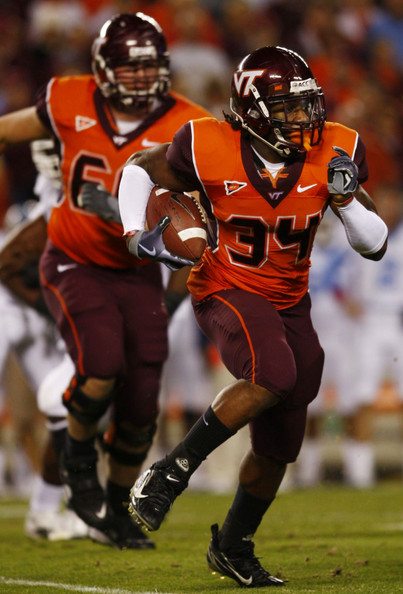 But BLUE. Not everyone gets the opportunity to pee blue.

When I actually experienced this fascinating phenomenon, I realized something: I could choose to not flush and other people would think I’d just finished thoroughly cleaning my toilet bowl. Because nothing feels fresher than sitting down at a toilet full of bright blue water, right?

It was like a magic pill! That made it look like I’d done a chore! Where can I get pills to make it look like I did the dishes more than twice a week? Or perhaps a pill that hid the crumbs my kids so expertly and efficiently spread across my floors? Someone needs to be researching these possibilities right away.

(Disclaimer: I didn’t actually not flush. But it totally looked Mr. Clean up in there.)

I’ve been wondering if I’ve contracted ADD. If I have, I suspect that one day they’ll discover there’s a risk of ADD contraction from being on Twitter. So many subjects. So many conversations. So many news articles. All jumbled together. Making your brain change lanes every 140 characters.

I was such a focused person in my school days, and even in my career days (which thankfully ended before the mainstream adoption of social media.) I could sit in class and take notes for HOURS and adore it. There was nothing I liked better than a perfect, neat, organized, outlined page of handwritten notes. It was a type of beauty I could appreciate.

But now, my brain is different.

However, I’ve found coping mechanisms. The downside to my coping mechanisms is that it makes me look like an unruly seven-year-old. But I swear it works. If I sit in church and take “notes” like this, I hear every single word of the sermon – and am able to process and even meditate on it. 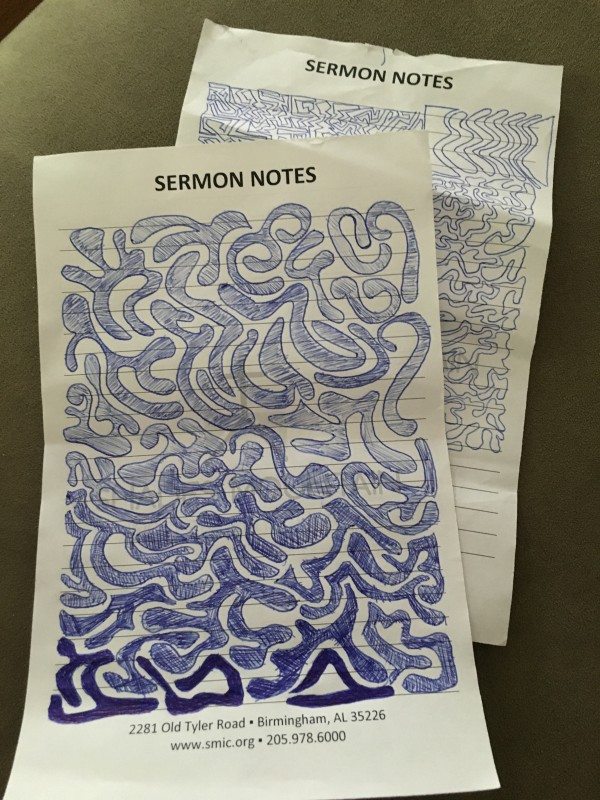 But the second I quit my line art because I started feeling bashful about all of the eyes around me that could get a brief look at my notes and and say “mm, mm, mm,” while shaking their heads on the inside, I don’t hear another word. My mind wanders to the randomest of places. Like writing this blog post.

So, dear people around me in church, and Pastor if you have really good eyes, please know – if I’m coloring, I’m listening.  And maybe those coloring kids are, too.

“We have a reservation. For fifteen.”

It was Father’s Day. I was in an extremely busy restaurant, trying to snag our family table before the staff was overrun with families celebrating their Dads. I was too late – I waited at the hostess station for ten minutes, and our food wait was over an hour and thirty minutes. But I say all this to go ahead and excuse myself for what I didn’t do.

Noah needed to pee. Right away. I sent him and Ali in the Ladies’ room together, instructing her to not leave without him.

Way too long went by, all while I was still standing at the hostess station.

He must be taking FOREVER to wash his hands, I thought.

Then she closed the door.

I was worried. What would I do if the hostess was ready for me to follow her deep into the bowels of the restaurant and my children hadn’t made it back yet?

Ugh. WHAT is taking him so long?!

A minute later, as the hostess was gathering our fifteen menus to seat us, Ali reappeared, and Noah followed her out.

They walked up to me as I began following the hostess.

“So he had to crawl underneath the door.”

“Yeah! I had to get on my hands and knees and crawl under the door to escape!”

“I tried to help him but I couldn’t.”

“Did you wash your hands really good?”

And I kept walking.

So I’m sorry, Manager-Who-Had-To-Figure-Out-How-To-Get-That-Stall-Door-Unstuck later that night. I had semi-plans to crawl back under myself and undo my son’s issue. (After I ate. Because ew.)

But then I had to wait an hour and a half for my food. And by the time I was able to wrangle my kids out of your restaurant, I had totally forgotten about your jammed door. Even though Noah returned once during the meal, crawling back under the stall door, to look for his lost bible. Because what good is there in Gideoning up a bathroom stall that can’t even be accessed?

3 thoughts on “Diary of A Tired Mom: Uncomfortable Truths.”