“Wanna join forces and do something really difficult together?”

“Sure! Let’s be sure to take on something so challenging that it will surely be physically impossible for us to accomplish it with the quantity and ages of children that will be accompanying us.”

We didn’t actually say that, but we should’ve.

Not-Crazy-Renee and I were happily (sadly) each at our own home with our own children, brooding about different things. It was Friday, and somehow we decided that five kids and two mommies in the middle of the woods was better than going it alone at our separate houses.

So I took Renee to a hiking location that she’d never been to before, whose particular parking place in question was in a quite sketch location (across the street from what is nearly certainly a chop shop – I promised her van would be there when we returned – and crossed my fingers just in case), and we set off on a 2 1/3 mile hike with a 9 year old, two 5 year olds, a 2 year old, and a 6 month old – and a couple nets and jars for tadpole catching.

And let me assure you. It’s not a fantastic idea.

There were bugs in the eyeballs…poison ivy everywhere…

“DO NOT WALK RIGHT THROUGH THE POISON IVY SON HOW MANY TIMES DO I HAVE TO TELL YOU?!”

“YOUR HAIR IS HANGING IN THE MUDDY NET!”

“I NEEEEEEEEED A WET WIPE I CAN’T BE MUDDY ANY LONGER!!!”

There was a moment, one mile from the van that was hopefully not chopped, where we both looked at each other with that look that we were certain there was no probable way that we would make it out of this hike with all five children and two mothers still in good working order. She had a baby on her front and a tadpole catching kit on her back, I had a toddler on my shoulders, and there were STILL three whiny children completely surrounding us on the ground.

We needed a white flag.

But we did make it out. Amazingly, that last mile went shockingly well. And so, we rewarded ourselves RICHLY.

As we collected our reward, the backseat piped up, of course. “Can we have a cake pop??”

“No. This is a Mommy-Reward-Only trip to Starbucks.”

“For taking you children into the woods and not losing our MINDS. (Or at least if we did, finding them again before we left.)”

We all went back to my house and had a grand poison ivy wash party in the bathtub.

And then I shooed my neighbors away, told my kids to knock themselves out playing iPad (literally if they wanted to I really didn’t care), and I took a shower and edited the photos from our epically disastrous hike.

Except I quickly discovered that I didn’t take any photos of the screaming, hopeless, Oh Dear God how are we going to get out of here moments. And also that children are never more beautiful than when they’re physically nowhere around but you’re quietly enjoying editing photos of their pretty faces.

Like for instance, this photo. I was helping some child with some emergency and Renee needed to put a fussy baby back into the Ergo. So what did she do? She handed fussy baby to my kid for a minute so she could reposition the baby carrier. And somehow, magically, it worked for a hot minute. 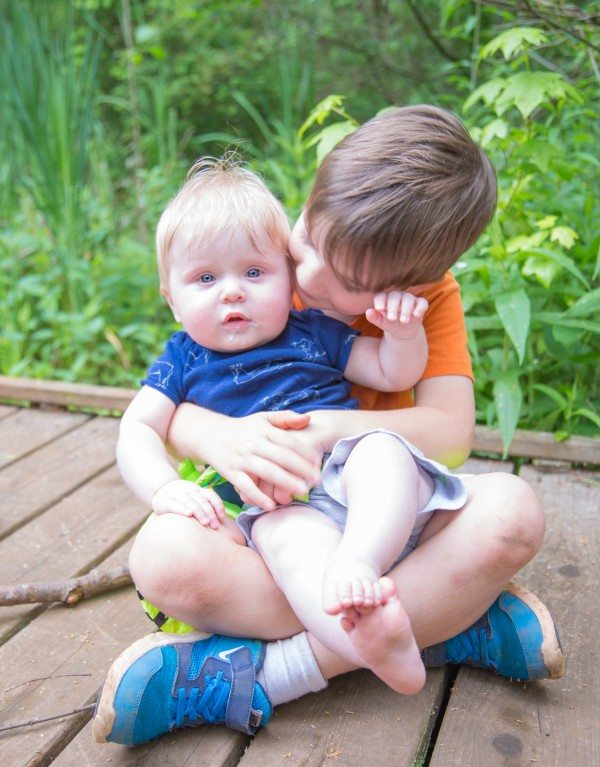 They’re so quiet and it’s so adorable and still. You’d never know that Noah just screamed “OWWWW!! He’s sitting on my firehose!!”

Or, that just a minute after taking this picture, 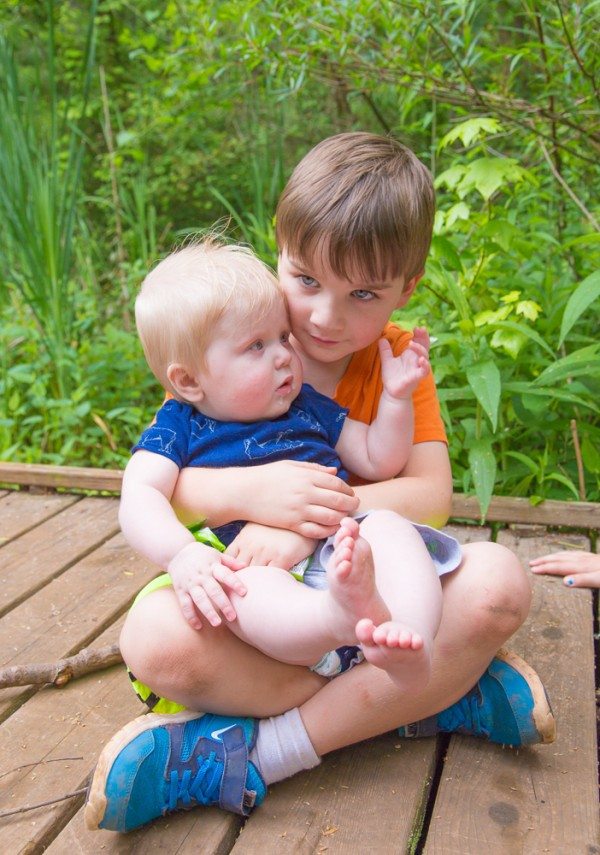 Noah saw a pack of gummies, forgot he was holding a baby, grabbed the gummies with one hand and started opening them with the other hand, thereby leaving no hands and arms around the baby in his lap, letting the baby flay out onto the dock.

But you’d never know it from the pictures. 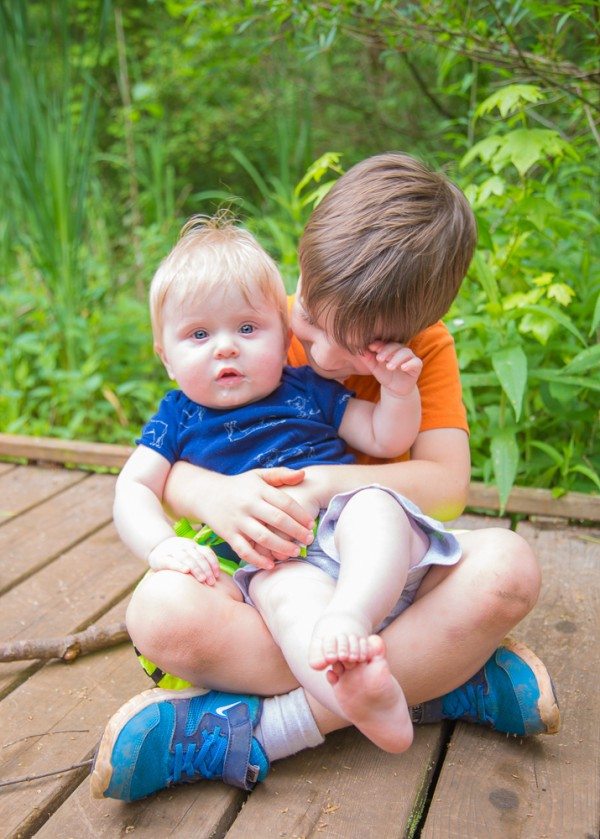 (With regards to this event, Ali had the following conversation later that night with Chris…

Ali: “Noah was holding Joshua but then he forgot to hold him because he decided to eat some gummies and Joshua fell and almost hit his head.”

Chris: “That’s okay. Noah doesn’t have a lot of experience holding babies yet.”

Ali: “Yeah and when he has held babies before, it was on the soft couch. And there weren’t snacks around.”)

(Moral of the story: It is child endangerment to let five year olds hold babies when snacks could become visible.)

Also. Child quarrels are so much more adorable when had in the woods…and also when photographed with NO SOUND. 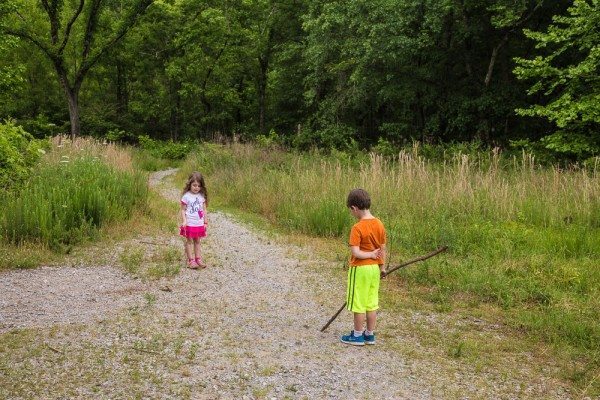 And little explorers look much more Indiana Jonesish when you can’t hear the Mothers yelling, “Come back! It’s time to come out of the cave!!!” Because we really didn’t want to crawl in after him. 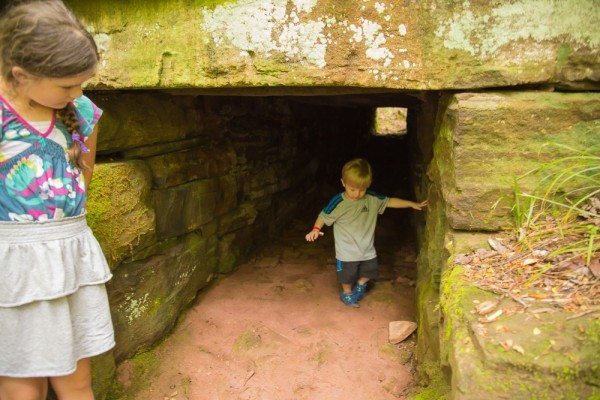 (And, if photographed just so (aka accidentally out of focus), children can even look like ghosts of children past. How much would you freak out if you looked in a small railbed tunnel in the middle of nowhere and saw this.) 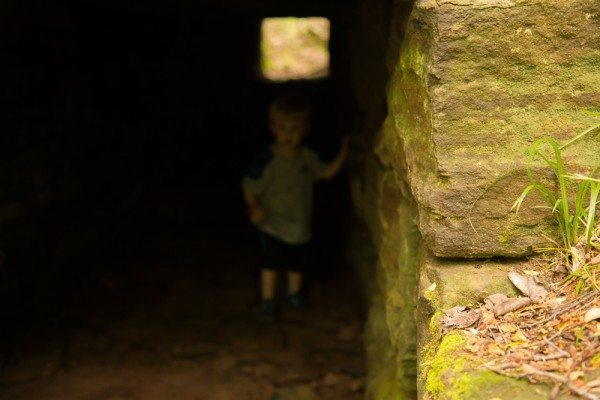 When reviewing photographs, you just remember the thrill of exploring new worlds and old civilizations – not the overwhelming feeling of HOLY-CRAP-PLEASE-DON’T-LET-THOSE-GIANT-CAMEL-CRICKETS-JUMP-INTO-HER-HAIR. 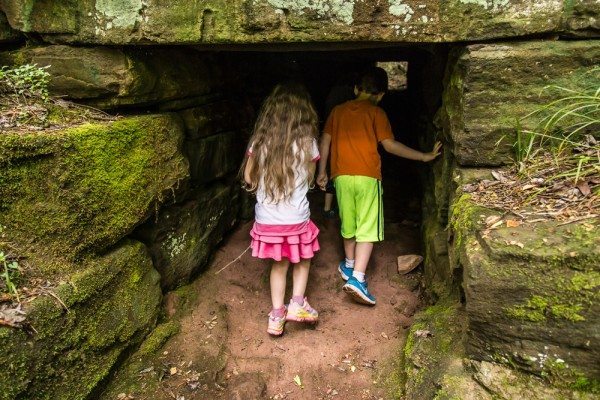 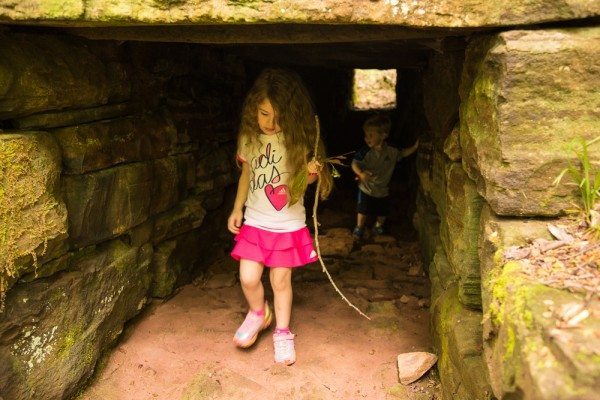 And then sometimes you’re distracting all the kids so that your friend can attempt to catch a frog…or tadpoles…or just rinse out the giant clumps of mud the children collected in the tadpole-catching-nets. And somehow, the lighting is just perfect and the children are all smiling and… 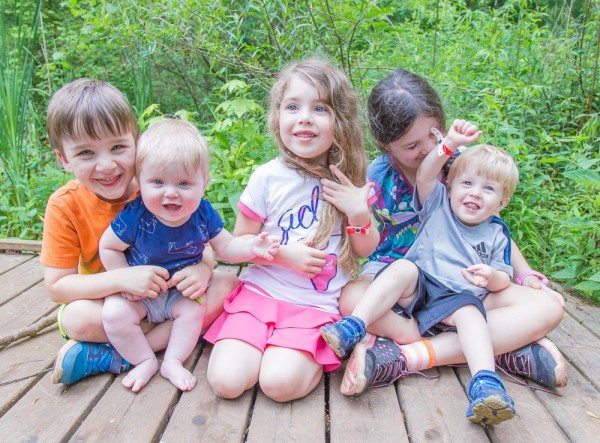 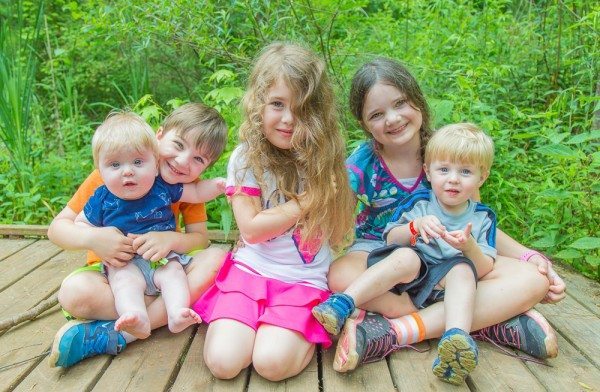 …and then you realize that your friend is actually doing some sort of AMAZING dance behind your head to get those children to smile. But whatev. Nothing matters but this tiny perfect second in the middle of miserable chaos. 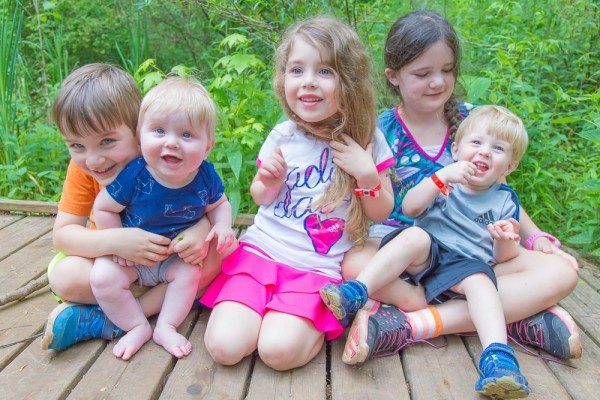 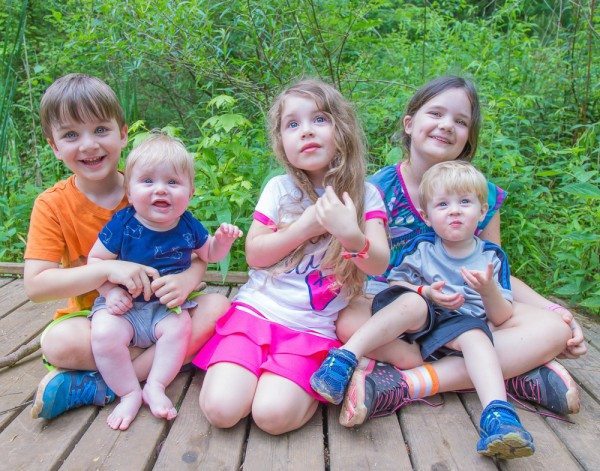 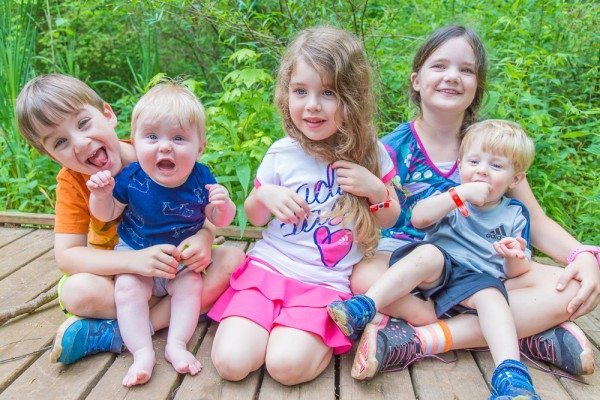 But the best picture I captured on that unforgettable, delightful, fantastic, can’t-wait-to-do-it-again hike was a particularly beautiful bonding moment (and might I say, at an exceptionally nice angle) between Not-Crazy-Renee and Noah, while they both desperately searched for tadpoles. 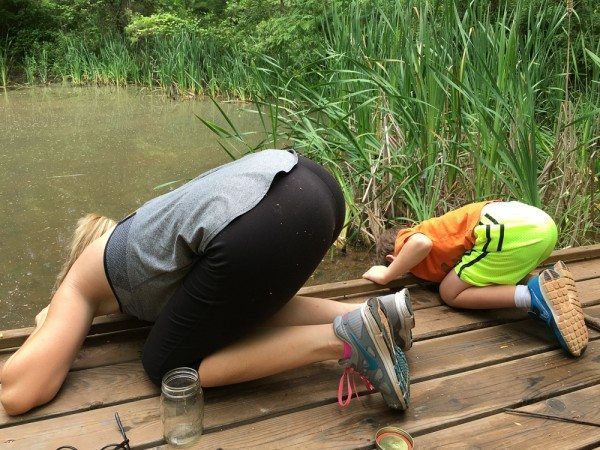 Yes. The pictures always make the trauma worth it.

9 thoughts on “How Mommy Nobel Peace Prizes are Won.”