“You know, I bet you and the kids would really love Minecraft, as much as y’all are into Lego.”

This sentence, spoken by a very naïve version of myself sometime last year, solely goes to prove that “Sticks and stones may break my bones but words will never hurt me” is a LIE.

Since that day, my children have been continuously and absolutely obsessed with Minecraft. I put it on their iPads, and they were infinitely sucked into the vortex of Creepers and Item Frames and spawning Sheep. Noah wakes up asking to play Minecraft. He goes to bed telling me about the over-underworld (whatever that is.) They check out Minecraft library books to hone their skills. And all this is despite the fact that they only get an hour of screen time a day.

(On most days. Unless I need them to have more.)

I wanted to understand – I really did – so I put it on my iPhone as well and attempted to learn. But it was just mindless building for me, as is Lego.

(Apparently all of the structural genes are passed down through their structural engineer father.)

I watched them play, I watched them build, I watched them explore their worlds. I knew there was a way for them to interact with others through the game, but I made sure that option was turned off. To them, it was simply a free-play building game. And a game that you could hit a sheep a few times and watch him die. And burn villages down. And put villagers in a box in a hole. Their deviant side definitely showed through in their Minecrafting.

“Look Mom! I just burned an entire village up with lava!”

If a child’s inherent goodness can be determined by how they treat their Minecraft Villagers, it might be safe to go ahead and lock my kids up for life.

Every night at bedtime, they wanted a few minutes of quality snuggling time – with us and Minecraft. I typically cuddle with Noah, and Chris with Ali. Sometimes we even watch Minecraft YouTube videos – because there’s nothing more exciting than watching videos of other people playing a game I don’t get.

But I love my children. So whatever.

One night last week, Noah, Chris and I were laying in bed doing the Minecraft-before-bed routine. Chris was about to get up and go in Ali’s room when some words popped up on Noah’s screen that we had never seen before.

“Stella has entered the game.”

A Minecraft girl walked up and got right in his face, with the name “Stella” floating above her head. This was no ordinary villager.

Chris and I looked at each other, wide-eyed.

“I thought you said they couldn’t interact with other people!”

“I didn’t think they could! I have all that disabled!”

Okay who is this creepy girl named Stella and how did she get in my son’s iPad.

“Have you ever seen Stella before?”

“Baby I know you love Minecraft but until we can figure out how Stella is getting into your game, we need to quit playing.”

I closed him out of Minecraft and Chris and I sat there, confused.

At that moment, Ali walked into the bedroom, her iPad in hand, looking confused herself.

“Hey Mommy I was just playing Minecraft and I got this weird world option that said ‘Steve’ and then I got kicked out.”

“Do you have a different Minecraft name?”

Stella was not some extremely creepy old lady hacking into our son’s iPad. Stella was our daughter.

Chris and I breathed again, and I remembered reading something about sharing worlds if you’re on the same wi-fi. I was surprised that it had taken this long for this happy accident to occur, but the children, as it dawned on them what had happened, were elated.

Ali jumped in bed with us and went back to Steve’s world and they began giggling like Junior High girls at 2am at a sleepover.

They hit each other on the head.

They went into each other’s heads.

They screamed with glee.

Noah, in a high-pitched loving voice, began referring to Ali as “Miss Stella.”

And Ali referred to Noah as Steve.

Chris and I listened to their adorable bonding and jubilance at their game gaining a whole new dimension. It was one of those moments as parents – the kind that you truly, actually savor and treasure.

(Not just the ones that the little old ladies at the mall tell you to treasure when your toddler is pitching a fit and your kid is asking twenty questions a minute. That kind is not treasured at all. You’d just like to treasure the moment of hitting the little old lady over the head with your fifty pound diaper bag.)

The next day was a rain-all-day kind of day, and it was Spring Break, so I decided to forego the hour-of-iPad a day rule and allow my children to fully enjoy their new bonding experience. It was just as adorable as I’d imagined – more “Miss Stella”s and “Steve why are you wearing a pumpkin??”s and them sitting squeezed up against each other on the couch giggling at their hilarious game. 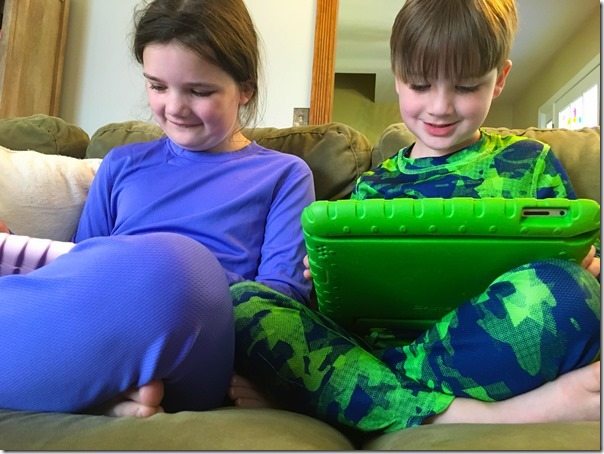 Of course, this only added to their addiction issues and the beggings for extra iPad time intensified.

And, by the fourth day, I walked into the room to Noah saying,

“Stella’s burning my house down!!”

And I knew we were back to normal sibling behavior.

But the budding friendship of Stella and Steve is a memory I’ll treasure forever – because they grow up way too fast, you know.