Somewhere between last week and this week, Noah learned the word “dammit.”

I really don’t think it was from me because I keep my dammits mental, under my breath, and only out loud when I’m alone without my children. Because I’m a hypocrite like that.

But who knows. It could be my fault. Maybe he’s bugged my subconscious.

Upon his first usage of the word, he was walking down the stairs, sneezed, and said, “Dammit!”, I asked him, perchance, where he had heard that word before.

“Well, it’s a bad word so you don’t need to say it anymore.”

“Well, I guess other people have also made it up and someone decided long ago that it was a bad word.”

…But the arbitrary nature of curse words is not what we’re here to talk about.

(This is really a red-letter post for me and inappropriate language usage, no? I need to change my blog name to The Very Worst Deacon’s Wife for the day.)

It was really quite festive. And personally, wasn’t an inaccurate representation of my feelings toward the season at the moment, due to my current condition.

(Guys I promise I am aware that you’re most likely insanely sick of me referencing that stupid wreck but my life is currently 99% dictated by it, so it comes up A LOT. I promise as soon as it is no longer applicable to every moment of my existence, I will quit making you hear about it. I swear I’m not turning into Wolowitz about space….“Hey – that reminds me about that one time when I was in a wreck!”)

But back to Noah at the zoo.

I of course shut down his song like a good mother, and then we had another chat later in the car about why we aren’t going to say dammit and how it’s a bad word.

He accepted my rather vague explanation of why he couldn’t use his new favorite word, then after a second of contemplation, said,

He’s so good at making me feel like a winner right when I’m in failure mode.

So hopefully next Christmas while skipping joyously through Zoolight Safari, he will instead be singing “Emmanuel, Emmanuel, EMMANUEL!!”, which sounds much more contextually correct.

As I was dealing with my angst over my son’s language issue, a blog reader sent me a picture of this Tim Hawkins magnet: 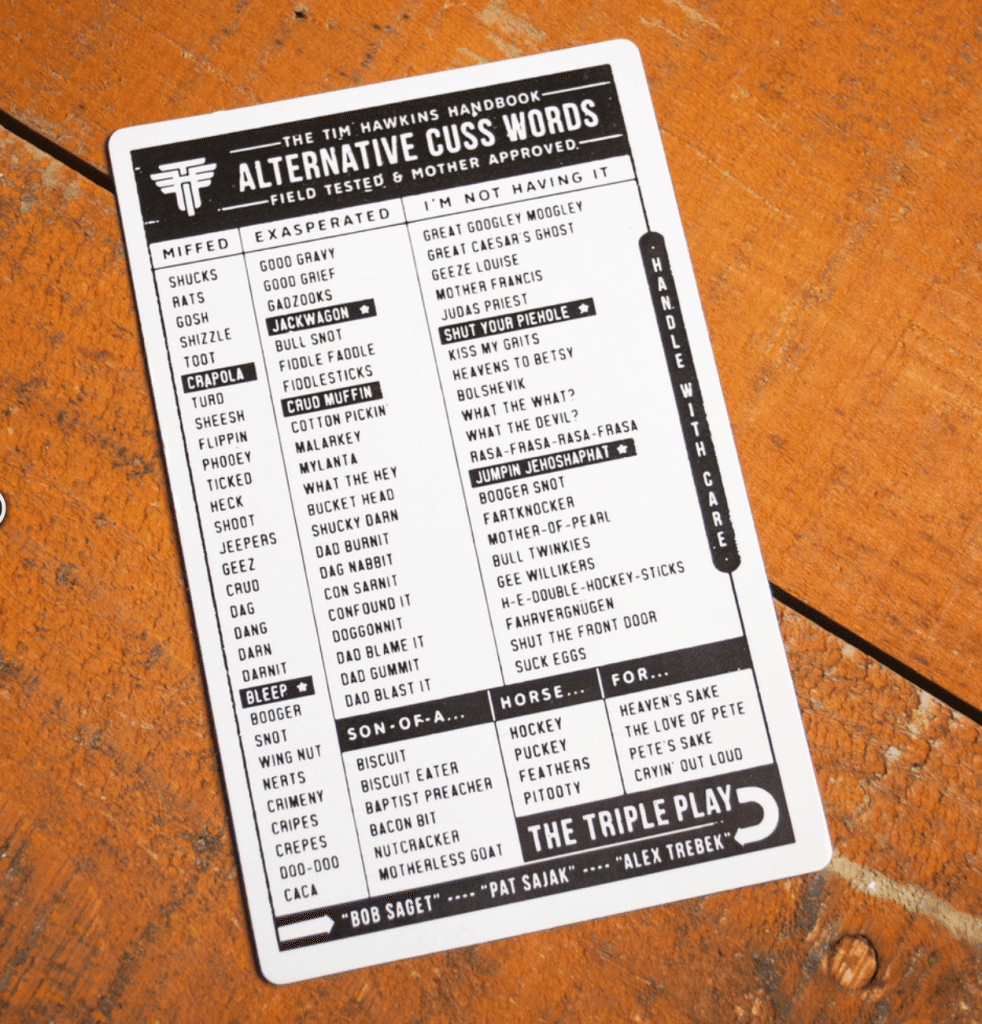 GUYS. I NEED THIS. And I have already used the phrase Son of a Motherless Goat because who wouldn’t want to say that??

The description made it even better.

Do you or a loved one struggle with the righteous expression of daily furies and frustrations? Have you ever received a formal complaint from the nursery that your Terrible Two has been freely spouting one of the Forbidden Fours? This latest page from the Tim Hawkins Handbook charts out 101 carefully curated substitute swears suitable for taming the most torrid of tongues.

I MEAN. Considering my year (which is aptly described as 2-turd-15 or written as so…)

I need some vocabularic options. Especially this week, as I’m having another downward turn in my recovery.

Now, my normal go-tos when around my children are as follows…

Which brings me to a point where I believe another survey is necessary. We need scientific data and a wealth of suggestions from struggling mothers like ourselves. What are your favorite on-the-job words of exclamatory frustration?

If enough of you share, I’ll even put together a chart. And maybe even a graph. Or perhaps a printable reference sheet!

Because we all need help in this high-stress job of motherhood.

37 thoughts on “Properly Training Your Child to Curse.”