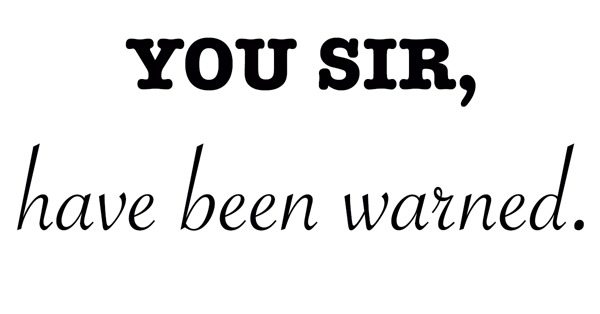 A little over a month ago, Chris and I took our friends Zack and Tanya to a football game with us. But before they arrived to our tailgating spot, we had to clear out a dead squirrel from their parking space.

No big deal. Chris took that squirrel and threw it in the bushes. As one does. Because hospitality.

But not before someone (not me nor Chris, for the record) took a picture of it served on an Alabama plate. As one does. Because Roll Tide.

Later as we were hanging out with Zack and Tanya, Chris started laughing as he was looking at his phone.

“Oh, you remember that picture earlier? Someone posted it on Facebook.”

“Are you sure you can handle it? It’s kinda gross…”

“Of course I CAN HANDLE IT. I tried to watch my own C-Section while it was happening, remember?”

He handed me his phone. I looked at the picture. I giggled.

Tanya asked what was so funny. I reached out my arm to hand her Chris’ phone, but Chris’ protective instincts kicked in. His protective instincts are apparently the only instinct stronger than his carefully-guard-his-electronics instinct, because he swatted his own phone out of my hand and into my plate of tailgating food.

He immediately regretted this decision as he stared forlornly at his iPhone swimming in my mashed potatoes. He picked it up and started wiping it off while fussing at me for trying to show our guest something so distasteful, as I laughed at him for his attempt to protect Tanya’s ladylikeness.

Because Tanya is pretty much the least ladylike lady (or possibly human in general) that I know.

She just ran a 100 mile race. She’s from New Jersey (blatant stereotyping here.) She blogs about things like Diva Cups (something of which I actually also have a blog post about but I’ve always been too ladylike to post) and pee color (warning: she also blogs in much spicier language than I do.) There is NOTHING about Tanya that wails “protect me dear sir, I might get the vapors from the sight of your dead squirrel on a plate!”

But most importantly, Tanya has actually written a blog post about how hilarious she finds staged dead animals, such as this classic SnapChat: 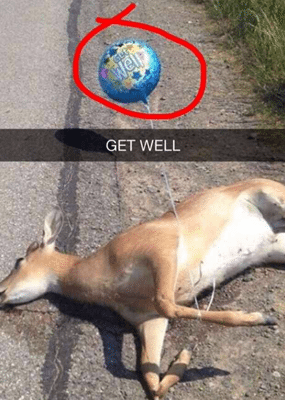 ….And to think that Chris Mashed Potatoed his own phone to protect her innocence.

Tanya went on to cry-laugh as she told Chris countless dead animal stories, and later made us watch this YouTube video, explaining that if Chris hadn’t so unceremoniously discarded her parking spot squirrel in the bushes, she could have made her very own Dead Squirrel YouTube.

Chris, mystified by this discovery of a new genre of humor that he had previously been unaware of its existence, slowly reasoned it out.

“So…..dead animals are….funny….and dead animal humor is…..a thing….I see…..so instead of….not letting Tanya see a dead squirrel on a plate….next time I see a dead squirrel…..I need to stage it…..like maybe give it some liquor bottles or something….is that how this works?”

Tanya promised that she would love him forever if he did just that.

(Which is really saying something since Tanya had previously proposed to Chris during an early morning Birmingham Track Club run because he put Peanut Butter M&Ms in the water stop cooler.) 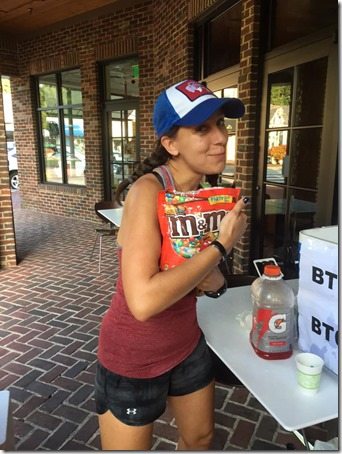 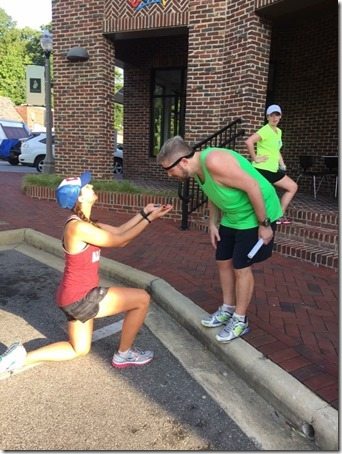 (And then he ate those M&Ms out of her hand.) 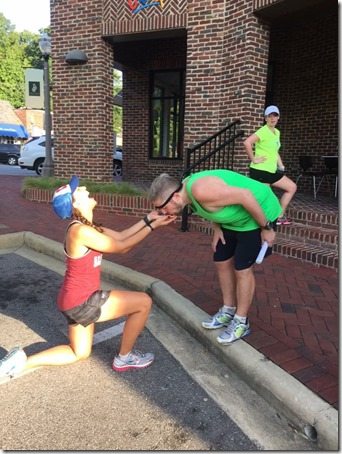 (Maybe we’re as weird as our friends.)

Anyway. Since The Great Mashed Potatoing, and the fact that Tanya and I have been making fun of him ever since, Chris has felt a strong desire to show his ability to grasp this darker side of humor, and has kept his eye out for appropriate roadkill waiting to be staged.

Fast forward a month, to Saturday.

I went out on my very first run after the accident, basking in the beautiful fall air and the ability to finally move my legs at a quick pace again after 31 days of brutal recovery.

A couple of miles into my run, I saw him. The ideal squirrel.

He wasn’t bloody and nasty like the Alabama Plate squirrel, he was right on a sidewalk that runners pass continuously, and he definitely looked passed out.

I texted Chris, who was at home with our children. 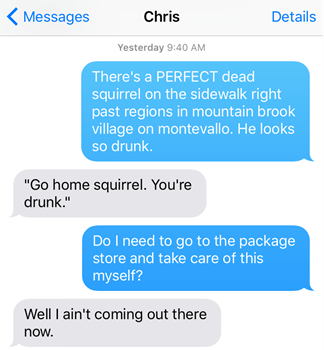 I mean I GUESS I see why Chris wouldn’t want to take the children out of the house for the sole purpose of staging a boozy squirrel. I guess. But I thought it was rather uncommitted of him.

So, after my run and a stop at Starbucks, I drove around the block and, for the first time in my life, entered a liquor store by myself. I walked into the ABC Store and slowly turned in circles, trying to figure out where they kept the squirrel-sized bottles of hooch.

I must have looked suspicious, because the cashier said rather guardedly, “Can I help you find something?”

“I was trying to find some sort of mini…maybe a Jack Daniels mini?”

My lack of specificity did not help my oddness.

“All of the minis are back here behind the counter. What would you like?”

I scanned all of the bottles, looking for the one from which a squirrel would most likely pass out.

She rang me up and gave me my paper sack, eyeing me skeptically as I slunk out the door with my four dollars worth of Squirrel Sauce.

I parked across the street and down the block from my new friend, breathed a sigh of relief that there didn’t seem to be a lot of running traffic at the moment, and quickly trotted up the sidewalk, paper bag in hand.

I sat down next to Sloppy the Squirrel and once again checked for approaching runners.

I opened up the first Squirrel-Sized-Fifth and dumped it into the pine straw. I carefully tucked it up next to him, then halfway dumped out the next bottle and leaned it on top.

Because I’m a terrible human.

And then I took my pictures. 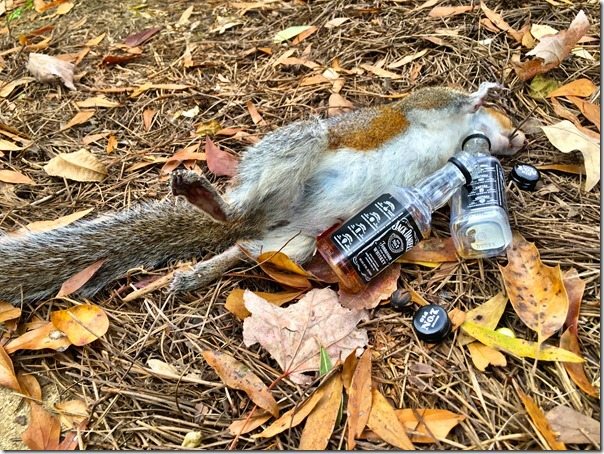 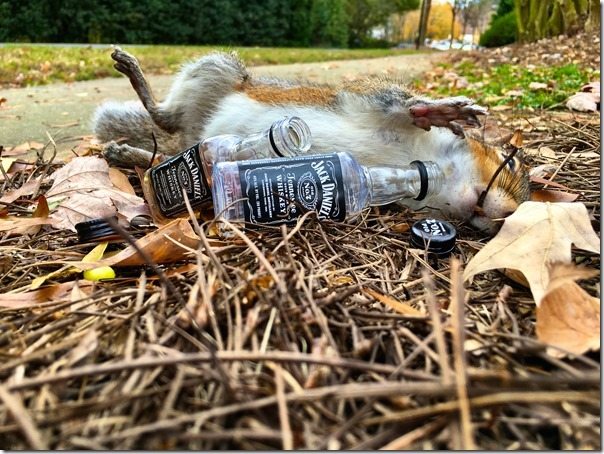 I left him there, just so, as a treat for any dark-sided runners that might happen by. 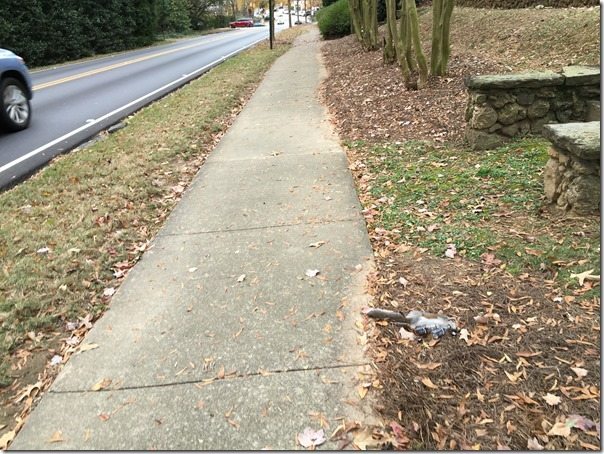 And then I stole all of Tanya’s love from Chris and texted her the picture. 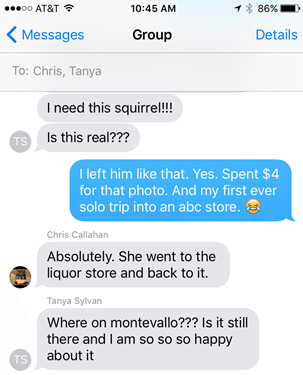 I’m thinking about getting Tanya a special gift for Christmas. Do you think I should go with a framed print, a wrapped canvas, or perhaps a set of note cards? The note cards would be perfect for any occasion. Get Well Soon, Birthday Party Invitations, Happy St. Patrick’s Day…

Because anyone who can stomach being Tanya’s friend would adore receiving a handwritten note in the mail like this. 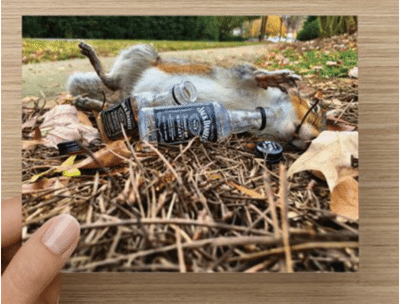 25 thoughts on “On Going Over to the Dark Side.”