It’s been far too long since I’ve run into a member of The Awkwardly Intense Busybody Club. It has saddened me, really – I’ve missed their bizarre advice and awkward statements about and to my children. I blame it on the kids for growing up: The AIBC are magnetized to babies, so once you’re through that stage, you really miss out on some of the most precious AIBC interaction.

So clearly I need to borrow a baby. May I please?

But the other day, I did manage to coax a member out of her shell – even without a tiny in tow.

It was an undercover AIBC agent, as she is someone I’ve run into many times over the past several years without getting awkwardly intense advice – an employee at a local bookstore. All of the bookstores around here have kid play sections – chock full of fun activities like train tables and reading tables and puppets and such. CLEARLY for children to come hang out in and play.

Oftentimes, we meet friends at a bookstore to let the children socialize over their version of coffee – toys. At this particular bookstore with this particular employee, it has always felt strange. Working in the midst of the children’s section, she gives off the vibe of never having had children and certainly not grandchildren, as she is always clearly disturbed by the fact that children would play in her section.

She hovers. She cautions them to be careful. She asks them to be quieter. She nervously picks up and straightens up right behind them before we have the chance to get the children to do it themselves.

And, if perchance we seem to be leaving the store without making a purchase, she points that out.

“What, not buying anything today?”

…In a sad, melancholy tone as if she was watching her 401K instantly decrease in value due to our actions.

The guilt was bad enough that I started making small purchases every time we went in there, so clearly her strategy is a success for the store and they should reward her with Employee of the Year.

The last time we went in, we weren’t there to play – Noah had his heart set on buying a train he’d seen not long ago, and had his allowance ready to do so. Ali also wanted to spend money just to spend money, so she’d found a bag of candy.

Noah took the train up to the counter and handed it to the lady. She studied it, then declared it broken in a huffy tone with the implication: one of those pesky children who like to play with things they don’t buy broke this train, little boy. Stinks for you.

Sadly for Noah, there weren’t any more trains left, so he decided he’d buy a Porsche instead. He paid, he moved on, and then it was Ali’s turn.

She’d already dug around in her wallet and pulled out three wadded up dollar bills for her purchase. Her “wallet” is more of a cosmetic bag. It’s a tasteful furry pink leopard print, so obviously her favorite accessory. 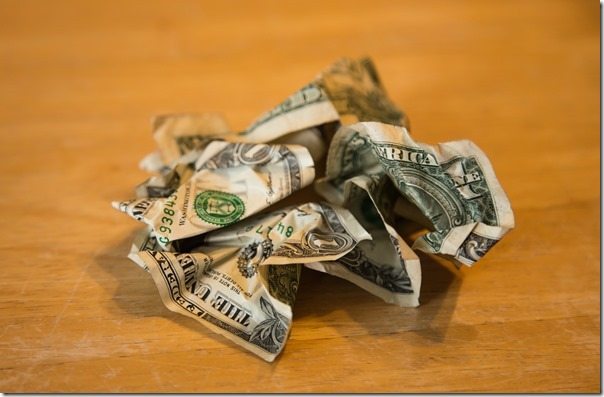 She put her three wonky dollars up on the counter and the lady began fretfully straightening them out with a sigh for each wrinkled dollar.

My bookstore guilt crept up again, and I apologized for the bent dollars.

Which was the trigger the drew the AIBC out of her, and created the following conversation:

AIBC: “Well, you know, she could make a wallet.”

Me: “Actually she has a wallet…she just doesn’t line up her dollars neatly.”

AIBC: “But she could make one. And then put her money in there.”

Me: “Well, sure, but she doesn’t need another one.”

AIBC, forcefully: “…Out of ORIGAMI.”

Me, considering HOW MUCH FUN it would be to help an eight-year-old make a successful origami wallet: “Umm…”

Me: “It’s when you make things out of paper.”

AIBC: “But there are tutorials on the internet! For all kinds of origami wallets!”

…And that’s where we learned: Origami. It solves all the world’s problems. Especially crumpled currency.

So next time we go into the bookstore, I’ll make sure Ali shows her how very good we are at origami. 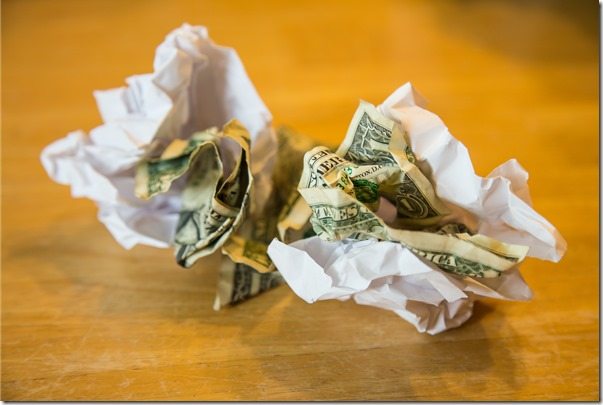