Last weekend I went on a girl’s trip with a few Moms in my small group.

But I’ll get back to that another day.

I got home from that trip around 3:15 Sunday afternoon, and when I drove up and parked, Fred (The Cat) came running up to me, with a very uncharacteristic nervous series of meows. Although it was currently a hot, sunny day, a small line of storms were headed our way, and I told Chris that Fred seemed nervous about them.

I got all of my (much overpacked) luggage inside and sat on the living room floor to play with the kids, while Chris went to the basement to get a quick run in on the treadmill. We were going to get out and go to a playground or something with the kids, but we knew that tiny rain band was headed our way, so decided to wait until after it passed.

I’d just started doing an activity book with Noah when the power went out.

After about the sixth rotation, I was starting to find it odd, and then it then stayed off for good.

I looked out the window to see the sky darken and the rain begin to fall.

Then instantly, the wind started blowing in circles, insanely powerful and loud. There were leaves and branches swirling in our yard and hitting the house, and Ali and I screamed and yelled “BASEMENT!!” at the same time.

I’ve seen a lot of powerful thunderstorms and not one has ever really scared me, but this one sent me into an immediate panic. I’d never seen things flying around like that before. All the way through the kitchen I was yelling at the kids to duck and not get near any windows as the sounds grew louder.

Chris met us at the door of the basement as he was about to run up and get us. He said “I can’t imagine how loud that was up there – it was crazy down here!”

And then the storm stopped.

We stayed downstairs for about five minutes until Ali quit crying (she has a significant frame of reference for what tornadoes can do, so she had immediate fear, while Noah seemed fairly oblivious), and then we all cautiously walked back upstairs to see what had happened.

We stepped out onto the porch and there was a lazy drizzle of rain and a significant chill in the air. As we opened our door and crossed our arms to stay warm, our neighbors across the street were doing the same. We looked up and down the street, and in a very eerie A Wrinkle in Time kind of way, all of our neighbors were stepping onto their porches at the same time, crossing their arms at the cold.

The outside of our houses were polka dotted with leaf particles that had been blasted onto the siding. There was a tree across the road next door to us, a tree split in half on the other side of us, and all of our yards were blanketed in leaves, gumballs, branches, other people’s garbage cans, and anything else left outside. 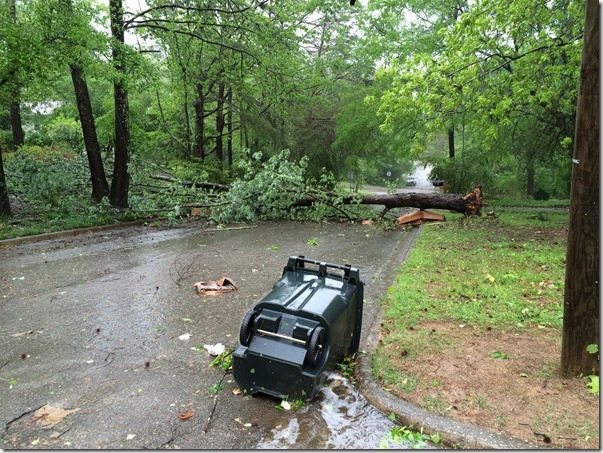 We stood there, all yelling back and forth and trying to figure out what happened, and then the rain stopped, the sun came back out, and it was like it had never happened – aside from everything being quite out of place. 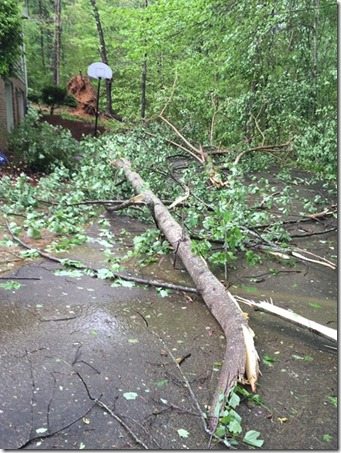 Our street congregated around the tree in the road, and one of the neighbors said that she and her husband had been driving home and had just turned onto our street when the storm started. They saw the tree begin to fall and backed up just in time – it was a very frightening near miss for them, and she was still shaking.

We all set off in different directions trying to see how far-reaching the storm had been, and to make sure everyone was okay.

The damage was bizarrely concentrated on only two blocks – our road, the road behind us, and the road that intersects with it. Beyond those roads, there weren’t even leaves on the ground. A few blocks away, it hadn’t rained.

In that small area of the storm, there were at least two houses with trees on them, 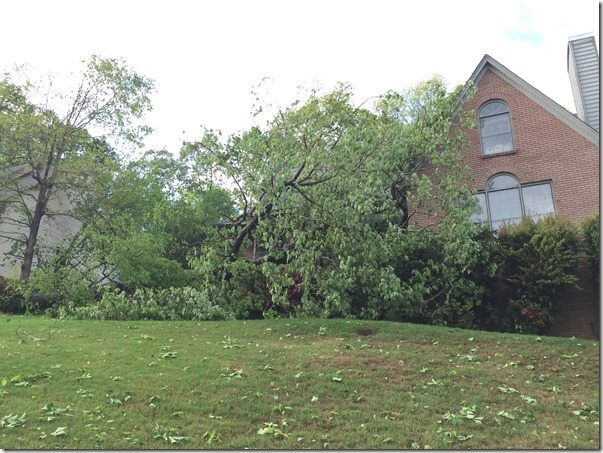 Well over a dozen trees uprooted or broken off at various points, 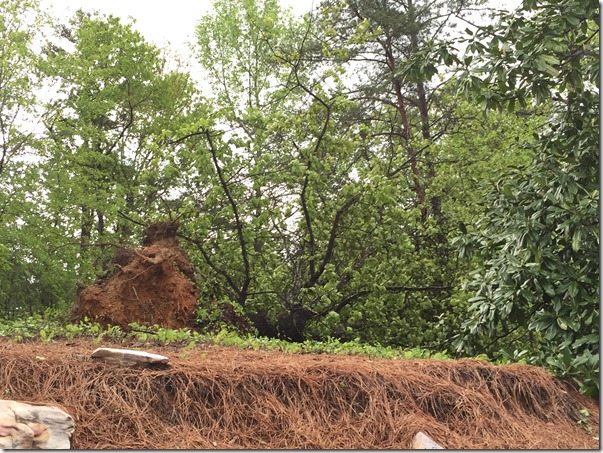 all having fallen in different directions, 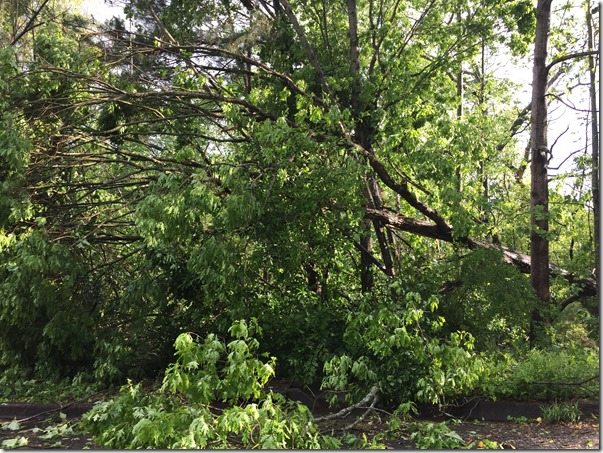 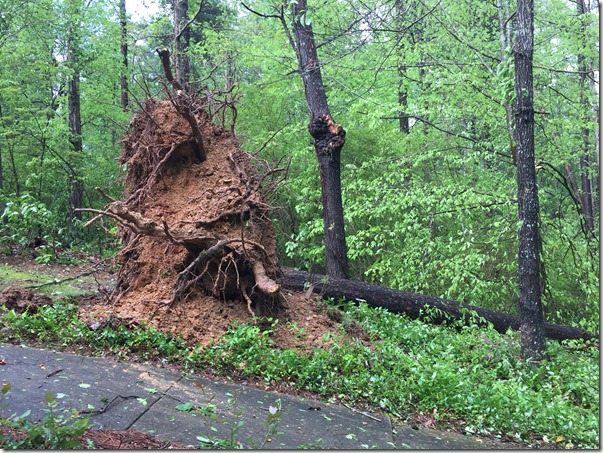 And we even received an early Christmas tree delivery when our neighbor’s tree broke off and flew over the fence. 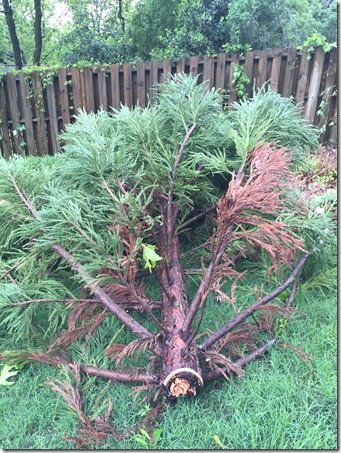 Thankfully, no one was hurt.

Within minutes, a neighbor had driven up with a chain saw and gasoline in his truck, ready to remove the tree on our road. People congregated to haul, saw, and clear the road. I felt kind of stupid for having asked a few minutes earlier who we were supposed to call to get it removed. Who knew my neighbors were so handy – and prepared? 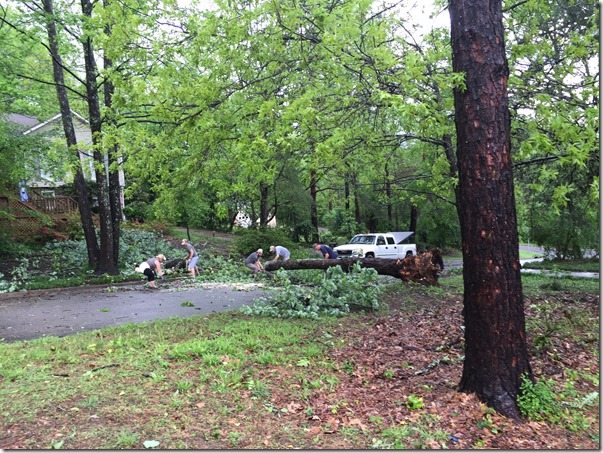 One of Fred’s many owners was pacing the street, asking when we’d last seen him. I felt terrible that I hadn’t heeded his feline warnings, but knew he was a sturdy cat and had braved a few storms before.

The sound of chainsaws buzzing and generators humming filled the neighborhood, a sound that is still ongoing. 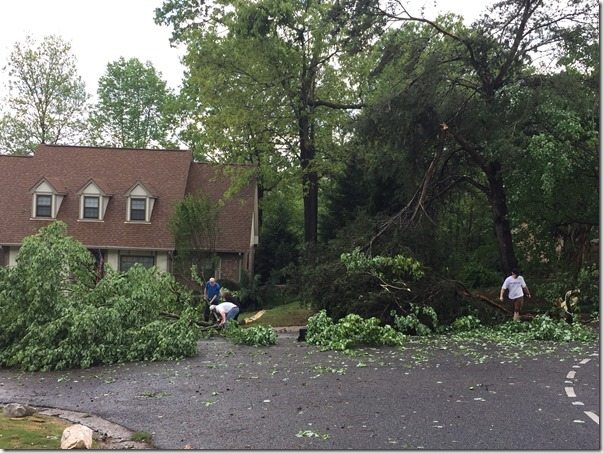 Power crews came and started working on the countless lines down – both big and small. 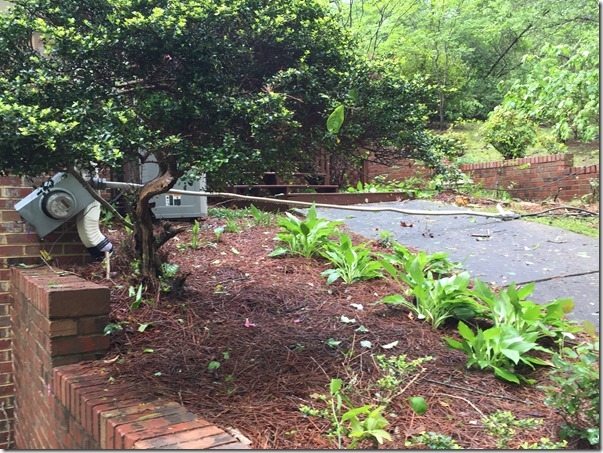 Our power was returned at midnight, although some neighbors are still out of power. Fred showed back up when Chris went to turn off the generator, happily purring over his exciting adventures. Although I’ve tweeted with the National Weather Service in Birmingham and they promised to investigate the specifics of the storm, it has not yet been declared a tornado, but all witnessing neighbors agreed – it sounded, looked, and acted like a tornado.

As for the kids, Ali had been immediately traumatized – every time the wind blew for the rest of the afternoon she whimpered and winced. We had some good conversations about God’s protection and God’s control over all things – even when storms do come. It took many conversations, but she is now at peace. And although Noah proudly told everyone how brave he had been during the storm, he was the one up crying several times in the night, telling me his nightmares about being on the sidewalk while branches and trees were falling and flying around him.

As for me, the most frightening part was the fact that we weren’t under any watches or warnings. There had been plenty of advance notice that there could be severe weather on Sunday, but no warnings related to the specific tiny band of storms that hit our neighborhood. We could have easily been outside on a beautiful day, or in the car, if we hadn’t been paying attention to the radar.

And also, we won’t live in the bubble of “it won’t happen to us” anymore. Living on the side of a mountain and nowhere near the usual “tornado paths” made us feel a little shielded from severe storms, but now we know – they can do what they want to do.

9 thoughts on “On Experiencing a Personal-Sized Tornado.”