My kids are blessedly now both at the age where they are Independent Playgrounders. Aside from the occasional “Give me a starting push on the swings”, they blissfully run around, make friends, entertain themselves, and gift me with a Mommy Break.

Sure, I could join the hordes of parents along the perimeter of the playground staring at their phones – I’m good at that, too. But it’s more entertaining to watch the In Real Life newsfeed going on around me. Because all of these events happened during one visit to the playground….

….The background soundtrack of the entire visit is the extremely loud, fast-talking cell phone Mom with the Starbucks cup. I’m not sure how the person on the other end could process all of those syllables coming out of her mouth, but they have no worries – she’s not giving them time to respond anyway.

…Oh – look over there by the swingset! A presumed Dad is leaning up against the pole, and his apparent wife/girlfriend/baby momma is taking a sexy profile picture for him. Oh – he’s putting on the sultry pout now. Don’t the children swinging in the background of this photo make it slightly less seductive? By his facial expression, I’m assuming his opinion is…no.

…Noah’s made a new friend, I see. A four-year-old-ish kid, he seems nice enough. Is that a…why yes, yes it is. A stud earring in that kid’s left ear. That might be the first pre-teen boy I’ve ever seen with an earring. How long has he had that? Did his parents get his ears pierced while he was still in the hospital? Is that a thing now? “Hey doc – while you’re doing his circumcision, can you go ahead and put a diamond in his ear?”

Speaking of which, has the pierce-your-newborn-baby-girl’s ears trend ended? I never see blinged-out baby pictures on Facebook anymore…

…Noah’s new friend’s Mom came up and is watching along. She has a giant neck tattoo. It says “Princess”. I’m not sure that word means what she thinks it means.

Then again, I could be wrong. I’ll take a look at Princess Kate’s neck next time the Paparazzi catches her at the right angle – maybe she has one to match.

…Ali’s found a friend, too. She looks oddly like Noah’s friend – they have the exact same hairdo.

…Ali’s friend’s Dad has come up to talk to me. Is he hitting on me? I ask if Noah’s friend is his, too. He laughs. “No, but they look like siblings!” …he has effectively distanced himself from Princess-Neck.

…The first Smocked Baby showed up at the playground. Her Mom is wearing leggings as pants. Ohhh…and now they’re taking pictures of Smock Baby with an iPad. WHERE IS YOUR PHONE PEOPLE. WHY DO YOU HAVE YOUR iPAD AT THE PLAYGROUND.

…Another little kid is getting ready to be pushed by his Mom in the swing. “Momma, is my butt hangin’ out of the swing?”

She pushes him. Hard.

He begins to squeal, even drowning out fast-talking cell phone lady. “MY BUTT!! MY BUTT’S FALLIN’ OUTTA THE SWING!!! STOOOOP IT MY BUTTTTTT!!!”

…A fast-moving blur catches my eye on the sidewalk outside of the playground. I watch, fascinated and a little jealous. A Dad is riding a skateboard, pushing himself with a broomstick-like-thing, then using the broom to push a kid in front of him that is on a sitting scooter.

And they are BOOKING IT.

Clearly, the mother is not at the playground today.

…Chris shows up to meet as at the playground, and Ali’s Friend’s Dad slinks off. Then eventually rejoins us and is now getting to know both of us. So maybe he wasn’t hitting on me. Who knows..

…Noah, who has been possessive of the one bouncy car on the playground the entire visit, is now being visited by twin blondes. This changes things. He hops out of the car and, with a huge grin, offers to bounce them in the car.

My goodness boys learn young. And what is it about twin blondes? 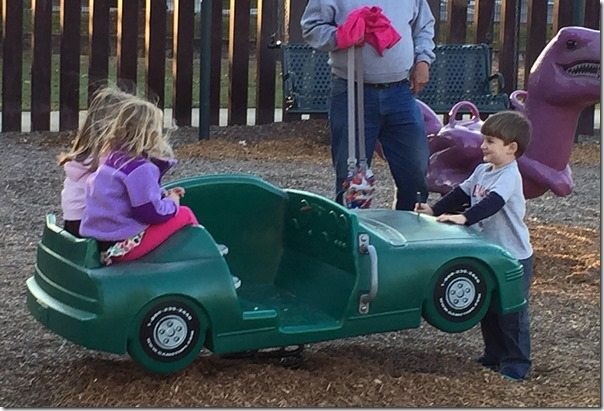 …A Lady in full Fairy Garb walks by. Sparkly antennas and all. She smiles and greets me, as bubbly as you could desire to be greeted by a fairy. And it is not Halloween.

And that’s a full day at the playground.

Which person were you?

17 thoughts on “Just Another Day at the Playground.”