I prefer texts over all forms of communication.

(Except for the fact that iPhones won’t let you mark texts unread. This might be the most glaring failure of technology in our society today.)

Besides all of their other benefits, sometimes texts can tell you so much more about a person’s belief system than conversation. Because conversation moves too fast – you might have time to explain yourself fully rather than letting them jump to their own conclusions.

Such was this conversation with Chris.

I was at a Discover Birmingham event selling Picture Birmingham prints a few weeks ago. I had been away from the house since 11am, so I’d brought a change of clothes to get fancied up for the party that evening.

But the dress I had brought was white.

And I’d forgotten my slip.

Thankfully, Super-Husband had offered to pick anything up I needed. So I texted him. 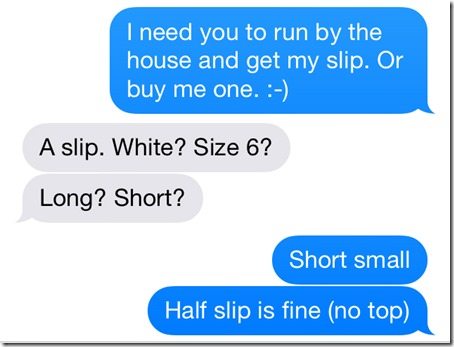 So he clarified which I’d rather have, then said something…puzzling. 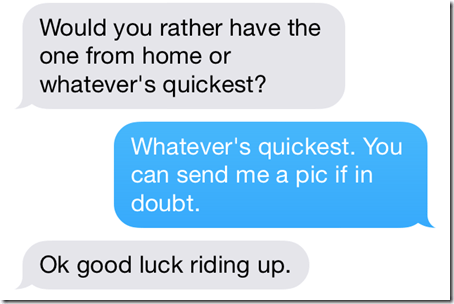 I didn’t understand. So I sought clarity. 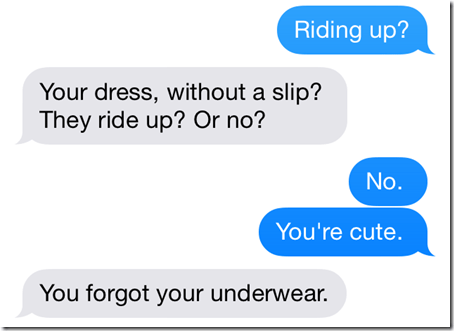 I married him for his quick-witted defensiveness.

I gave him all night with me by his side in a white dress to figure out exactly why I had needed that undergarment, but finally had to tell him.

“SEE-THROUGH, darling. You don’t want my dress to be TRANSLUCENT.”

The next day, I found myself curious as to whether he understood other feminine undergarments. 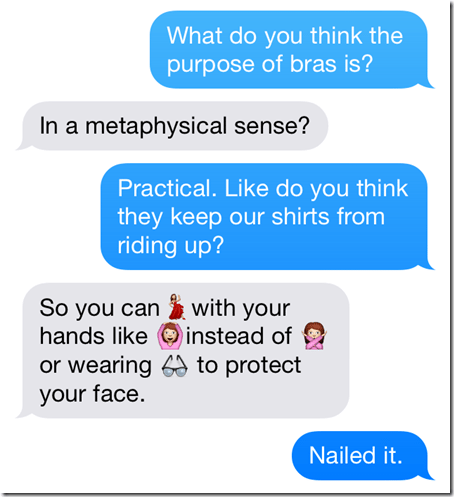 In Understanding Women, he gets an A for Effort. And creativity.

I text with my Father, also. But not about bras.

A bit of back story.

My Mother is a Mrs. Doolittle. Animals are attracted to her – not necessarily a good thing when the animal in question is a giant snake curled up happily upon her hair dryer underneath the bathroom sink.

But fortunately, her two latest additions were not snakes. She recently became the proud owner of a pair of baby squirrels who somehow found themselves in a classic Disney Movie situation – you know, their parents died.

My Mom nurtured the twins, keeping them in the bathtub and often letting them ride upon her shoulders throughout the house. The grandchildren ranged from repulsion to heavy-handed fascination during the squirrel’s tenancy of the bathroom, depending on each child’s personality and fondness of wild animals.

But regardless, you’ve still gotta visit the bathroom. Even if two beady-eyed rodents are there to frighten the poop right out of you.

The time came, though, when the squirrels needed to find their independence.

Mom tried to turn them loose into the friendly woods that had slaughtered their parents, but they wouldn’t go.

They kept begging her for her friendship and protection.

So my Father, being the ever-ready provider that he is, built her a squirrel cage to put on the back deck. The babies wandered out a little longer every day, but still came back to their warm and loving predator-free cage to sleep at night.

Until one of them didn’t.

And my Dad sought my advice. 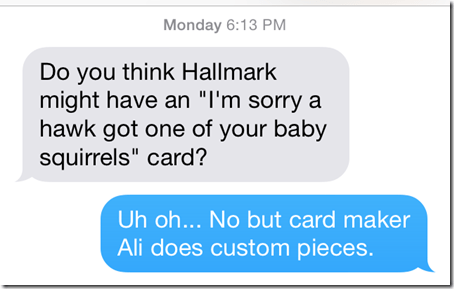 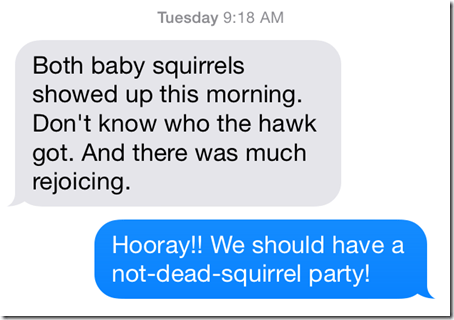 But then…two days later…I had to tell my Dad some bad news. 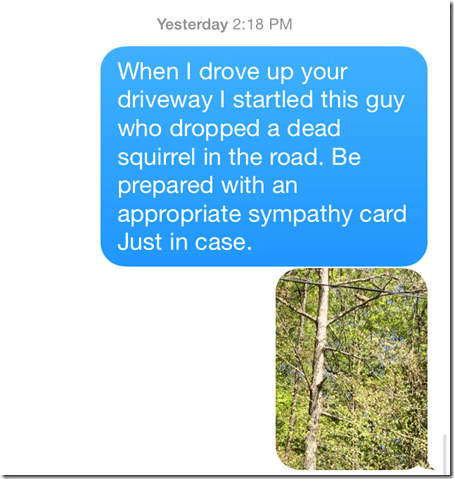 According to my Mother, both squirrels are still in tact.

According to my Father, only one squirrel is still alive.

But sometimes it’s best to let her believe. Just like Disney would want her to.

And finally, a text to my husband about his son. 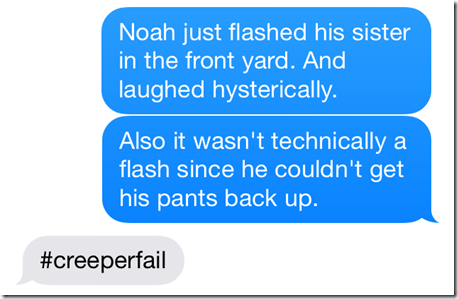 You all have these sorts of problems too, right?

12 thoughts on “Modern Communication with Men.”