Upon putting Noah to bed on the last night of our weekend away together, he casually asked me, “But what about the monsters?”

He’d never mentioned monsters in this or any other room before, so I assured him that there were no monsters and not to worry.

He did not, however, take my assurances to heart.

About an hour later, he started inconsolably screaming. It took me a while to get him to even wake up, and even longer to calm down, but I finally did and put him back to bed.

And then an hour later, it all started again.

This time he had the consciousness to inform me that the long blue curtains in his room {that were denim and had overall hooks(!?!)} were actually Sulley. 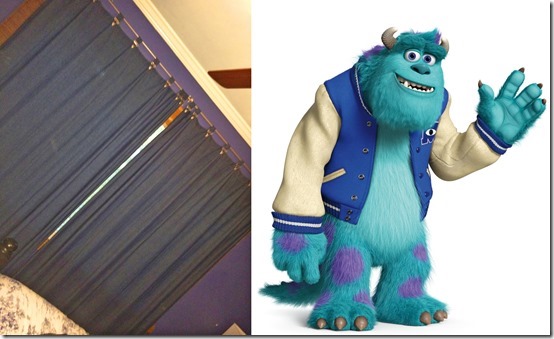 (Which, by the way, those denim monstrosities didn’t at all seem to go at all with the supremely girly toile comforter. But toile does not help a toddler sleep.) 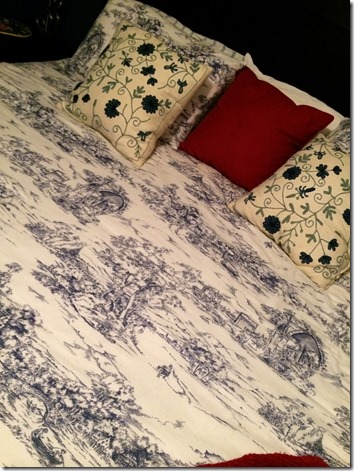 (And also, since Noah adores Sulley, his excuse seemed rather sketchy, but you can’t reason with Hyenas, Donkeys, or Toddlers.)

My friend Barkley, not one to shy away from co-sleeping when necessary, encouraged me.

“It won’t work. My kids aren’t the ‘sleep in my bed’ type. Ali refuses the concept all together. He’ll never calm down enough. And I won’t be able to sleep a second.”

So, despite my great aversion to sleeping in the same room with my children, I didn’t have the heart to force him to sleep in a room flanked with giant denim monsters.

So I decided to try it.

I gathered up his blankets and paci and cars (yes I let him sleep with cars) and dumped him into my bed.

And, after giving him the ultimatum at least 268 times of “Close your eyes and go to sleep or I’m going to put you back in your bed and I don’t care if there are monsters” (okay I left the monsters part out but he knew it was implied), he fell asleep. 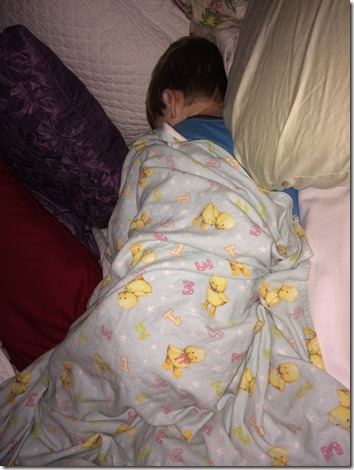 And, if I’m being honest, I fell asleep quicker than I had the night before when I was alone. So maybe Barkley is onto something.

Until Midnight, when he sat up and started rocking in his sleep, moaning eerily.

He laid down on my chest, then sat up and rocked and moaned.

He pushed my head out of the way and laid down on my pillow, then sat up and rocked and moaned.

He tried a dozen different positions, each leading to more rocking and moaning.

Until he finally found the perfect spot: his head jammed under my ribs, laid out perpendicular in the “H” formation – if only Chris had been on the other side to complete the H. Except that there would have been no room for Chris. Because there was barely room for me.

Noah immediately fell back asleep, leaving me approximately six inches of bed space in which to try and arrange myself without falling off the bed or being even more skewered by his extraordinarily forceful head.

It took some effort and way too much time, but I managed to will myself to fall asleep again.

And then there was the 3am serenade of The Thomas and Friends Theme Song.

You’ve gotta be kidding me. Why is he awake??

Down the hills and round the BENDS…

At least he cut out some of the lyrics.

THOMAS AND HIS FRIENDS!

And then he was back to sleep, and so was I.

I roused at 8:30 with the sun streaming in and shockingly with a sleeping toddler positioned back correctly beside me. I tried to get up quietly, but that woke my bedmate. 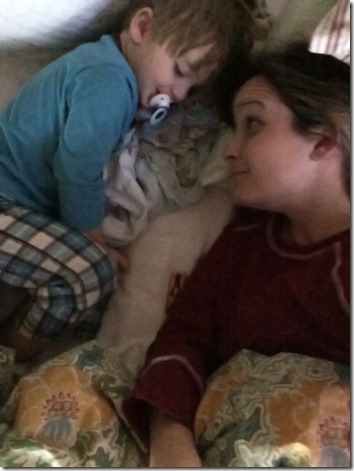 He looked up at me with his giant blue eyes, grinning at me with half-mischief, half-newly-formed-intimacy. He blinked his thick eyelashes a couple of times adoringly and full of some serious charm, as I began reconsidering my staunch anti-co-sleeping personal position.

And then suddenly, he remembered all of my threats. And squeezed those eyes shut as tightly as he could.

8 thoughts on “The Overnight Stay.”