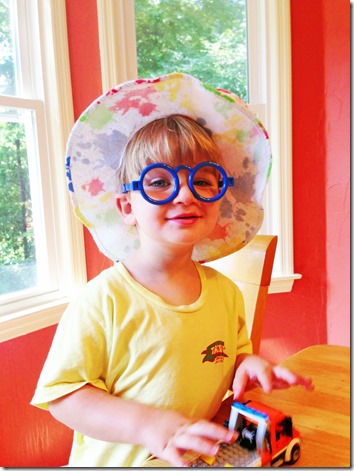 What’s That Sound is a series of my second child’s most recent quotes. (And no, this isn’t unfair to my first child – she got her own series.) It’s the most Mommy-Bloggified thing I do, but how else am I going to remember?

One morning at breakfast, it went down like this…

Noah, sounding amazed and stunned with wonder, “You will read even to ME???”

Coming out of the grocery store, I picked up Noah and my one grocery bag and headed to the car.

“Do you need any help, Mommy?”

I thought I should encourage his gentlemanliness, so I added, “Do you want to carry my bag?”

“Who made you so little?”

“The Man. The Man made me little.”

Noah kept repeating over and over, “The gun shooted the Rowing Barrow and hurt me at Gramamma’s. It was really super loud.”

I didn’t think he got shot at my parent’s house, but I finally called my Mom to figure out what happened. What he actually meant was that he fell while pushing the wheelbarrow, which coincided with the neighbors shooting their guns for target practice. Which was indeed really super loud.

He dropped a strawberry and yelled out, “That’s ridiculous!!”

Noah was admiring the full moon one week. The next week, he noticed it’s waning state and yelled, “The Moon!! It broked!!!”

I was trying to see if toddlers were impervious to tongue twisters. So I said, “Say, ‘Cindy sells seashells by the seashore.’”

Heard from he back seat of the car…

Ali noticed the Waffle House and asked to go there for her birthday. I wrinkled my nose and said, “Yuck!”

Noah: “Well, Daddy sure does.”

Noah was pitching a fit and I warned him that he needed to stop crying or he’d have consequences. He stopped, blinked twice, then yelled, “I’ve got water in my eyes!!!” and started crying again.

Heard from Noah to Ali in other room… “I don’t wanna poop, Ali. It’s too yucky.”

Ali: “We’re going to Sunday School! Are you going to play with Charlotte?”

That night, at bedtime,

Chris: “What was your favorite part of the day?”

Noah: “Sunday School, because Charlotte was there.”

Chris: “Does she usually wear a bow?”

Chris: “Is it pretty when it’s on her head?”

He likes big bows and he cannot lie…and is apparently a hair man like his father.

While peeing in his diaper, Noah yelled, “I’m melting!!”