We were having a perfectly lovely morning at home, 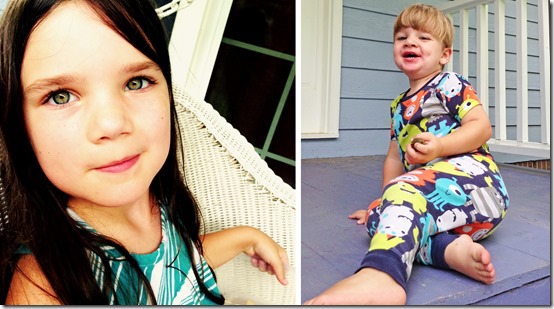 My one true phobia.

The only thing that can make me scream like I’m being chopped to bits by an Axe Murderer.

(In fact, my husband knows exactly what that scream means. So if I ever am being chopped to bits by an Axe Murderer, he’ll assume it’s a cockroach and come running with a shoe.)

My enemy was clearly dying (he had that drunk stupor about him), but that didn’t stop me from making both of my children jump with my impressive lung capacity.

He stumbled out from under one of the kid’s toys and headed toward MY blanket. The very blanket that I curl up on the couch with every single night as a reward for living another day (and getting the kids in bed.)

I jerked my blanket up off the floor (where certainly one of my children had carelessly left it after using it for a cape hideout or some other such nonsense) and screamed at him to run the other direction.

So he hobbled off (he might have only had three legs) toward the kid’s train table.

“BECAUSE I CAN’T KILL HIM BUT MAYBE I CAN TRAP HIM!”

She ran off and came back with a very small bowl. Which meant that my target practice was going to have to be grossly more intimate than that with which I was comfortable.

Somehow all of that passed while he was still on the way across the living room – this roach was clearly a maimed creature. He was crossing under the threshold of the train table when Ali delivered the bowl. I held my breath, furrowed my brow, and slammed the bowl down on top of the Mostly Dead infidel.

And held my breath as I watched to make sure that he was, indeed, enclosed.

I saw his creepy legs and antennas as he explored his new home.

Ali found that this was a good enough time to question my tactics.

“Why were you screaming about him being on your blanket? I mean, what would he have done to it?”

“Nothing, honey. That’s not the point. You’ll understand one day when your fears fully develop.”

But then I remembered something terrible: I couldn’t just leave him there until Chris got home. Chris’ Mom was coming to keep my kids while I went to the doctor. And a Roach-In-A-Cup is not mentioned in Emily Post’s chapter on The Proper Way To Greet Your Mother-In-Law.

But also, my shame went deeper than that. Chris checked in on me while I was pondering my options, and I shared my true feelings with him. 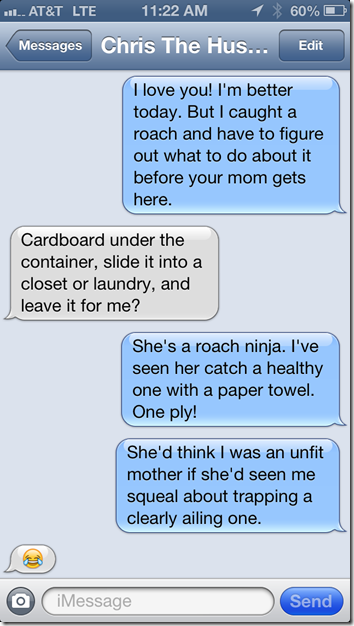 It’s true. She has more Roach-Killing Skills than any other southern woman, and well over half the southern men I’ve known as well. Heck – Chris won’t even squash one with a paper towel!

I sat on the couch and stared at my prisoner as he climbed the walls, showing me his evil underbelly.

I contemplated sliding poison-laced paper under the edge.

Or throwing him and his container outside as quickly as possible.

(But I don’t want to support the propagation of his species.)

Ali wanted to know what was wrong with me. I explained my dilemma.

I looked at her and her foam bat.

I looked at the intruder.

Finally, I obeyed my husband. I found a manila folder (I needed severe sturdiness at a time like this), gingerly slipped it under the bowl while I hyperventilatingly visualized him escaping and crawling up my arm, then ran to the laundry room, heart beating wildly at the thought of carrying something so intrinsically nasty.

Then I texted Chris back.

But death row didn’t treat him kindly. As I am writing this Saturday afternoon, the prisoner is still in our laundry room, but upside-down-dead in his cell. 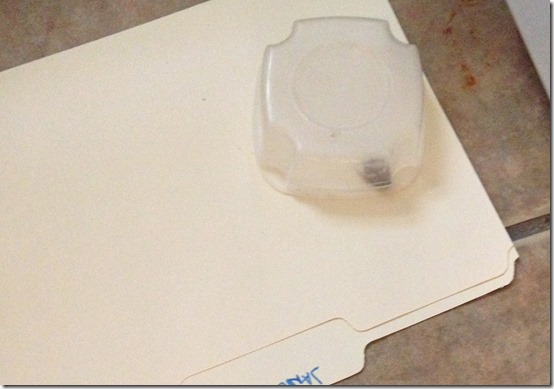 I still dare not touch him – it could be an escape ploy.

But the important thing is, my Ninja-In-Law doesn’t know what a complete coward I am. Until she reads this post.