It’s been way too long since I’ve run across a member of the AIBC. I don’t know if it’s because Noah is older (they’re especially attracted to babies) or that I don’t shop enough anymore (which I highly doubt is the case.)

But I miss them, and that’s a fact.

I mean sure, every time I go to Publix, the elderly check-out ladies always comment on something I’m buying, or ask me if it’s good, or discuss my choices in detail with the person bagging my groceries.

(After which I’m always thankful that I wasn’t purchasing laxatives or Vagisil. Or both.)

But that’s to be expected. They’re told to be nice at Publix, and elderly ladies translate “be nice” as “ask lots of questions about the customer’s purchases!!”

But I still miss the true members of the Awkwardly Intense Busybody Club.

So much so that I almost purposefully went to a store I don’t normally go to after a friend tipped me off that she ran into the AIBC founder now working there.

(Because there were quite a number of people who knew exactly who I was talking about in those first two posts. Because she’s that dedicated to her task.)

So I couldn’t have been more thrilled to meet a new member of the AIBC the other day. Sure, she’s got a lot to learn, especially in the area of really dragging out the questioning to a ludicrous level. But I found our conversation to be fantastic nonetheless.

It all started with this puddle of oil in the parking lot at Walgreen’s. 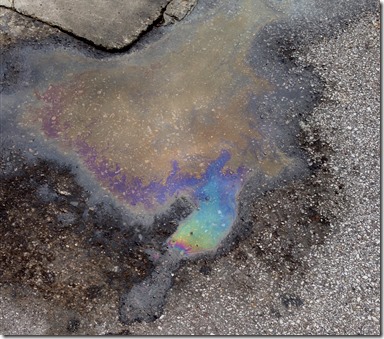 We had to stop by the drug store to get a couple of last minute items before our family vacation, and Ali noticed the above Eighth Wonder of the World.

She pretty much flipped her little lid about how unbelievably magically cool it was to find a rainbow puddle, even after I explained to her that it was caused by car drippings.

As we were walking into the store and by the young cashier, Ali was still gushing, and said with all the excitement that a blog-raised child could possibly muster,

“I SO wish I had my iPad with me so that I could have taken a picture of that rainbow puddle!!”

The cashier giggled, and we walked on to get our items.

We arrived to the counter to check out, Noah on one side of me and giddy about the vast amounts of candy within his arm’s reach and Ali on the other side still floating about that rainbow puddle.

They made an adorable little pair, I really must say.

And so did the cashier.

I laughed and said, “Thanks! I think so.”

Then she raised her eyebrow, stared me down and said pointedly, “Are they bad?”

…because my six year old wouldn’t understand that you just asked if she was a bad person?

…because you’re in the market for new children and considering mine as an option?

…because they’re so cute that they can’t be good too or it would be an unfair amount of The Kid Lottery Luck for me?

I have no idea.

But I assured her that no, my children are not bad.