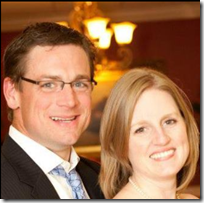 Let’s talk about Chuck and Lydia.

You might recognize Lydia, as she has had a long history of influence on my blog, being both the catalyst and cohort of my very first denim adventure. So basically, she’s to blame for my entire jeans obsession.

Chuck and Lydia just happened to get married exactly one year and one week after us. As such, we’re often celebrating our anniversaries at the same time, comparing anniversary trip ideas, and have even discussed taking a monumental anniversary trip to Greece – together.

(Their five kids, our two kids, and the fact that one of us is always pregnant or nursing at the time of our anniversary really puts a kink in those plans. But one day, my friends…one day.)

Last year was mine and Chris’ eleventh anniversary, so if you’re good at math like I am, you can postulate that it was Chuck and Lydia’s tenth anniversary. We hadn’t had a grand tenth anniversary the year before because we had a brand new baby, so I have to admit I was a bit jealous the next year when I heard the story of the ridiculously majestic surprises that Lydia received for her tenth.

It started with a surprise babysitter and an appointment for a pedicure. Then there was a surprise pickup from her husband, a trip to a scenic outdoor setting, and while they were walking around enjoying the sights, they were met by our Pastor, who presided a surprise renewing of their vows. Chuck had memorized his original vows and had printed out Lydia’s. After she recovered from crying her eyes out, there was a gift of significant jewelry and a private ten course meal served by a renowned chef and a wait staff at a private dining room in Southside. Chuck had even printed out their menu on scrapbook paper, along with a poem he’d written for the occasion. Doing the scrapbook work for your wife? Priceless.

Did I mention that Lydia was 38 weeks pregnant at that point? Yeah, she did a lot of crying.

So all us girls were like, “Dang,” and we gave Chuck major thoughtfulness points.

Which brings us to this year, their eleventh anniversary.

The 2013 Anniversary Season found Chuck and Lydia in a state of leaving their cherished home, moving their family of seven into a rental house, and building a house. In fact, they actually moved on the day of their anniversary.

Like any normal woman, this state of flux and leaving behind a house with much sentimental value has Lydia in an unusually emotional state – perhaps the only time she’s cried since her last anniversary.

Two weeks earlier, Chuck surprised Lydia with a little getaway for their anniversary. After hearing Lydia’s side of the story, I interviewed them together to bring you the “He Said, She Said” version of their trip (and when I butt in, my words are in black.)

“I have to admit. When Chuck told me on Wednesday night that we would be leaving Friday morning for a surprise trip, I had to take a deep breath. I almost cried. There was so much packing to do, it was the girl’s last day of Spring Break, and I didn’t want to go anywhere.”

“But I had planned this trip two months ago! Before we had even sold our house.”

(In a manly Iron Tribe CrossFit Voice…) “A Chuck-Planned Vacation, that’s what!”

“Vacation is supposed to begin with sleeping in and a nice relaxing bath. He also gave me very vague instructions – ‘we’ll be outside.’ So I packed, and then he put a backpack on the bed. Next thing I know, all of my stuff is in the backpack.”

“So I asked the next logical question: ‘Are we going to be sweating?’, and he said, ‘No, no, no.’ So I wore nice jeans, a sweater and a scarf, and three-inch wedge heels.”

“But hey – she looked GOOOOD.”

“We got to a small town in Georgia, and he informed me that we’re going to be eating a Big D’s. Um, okay – I’m assuming that he must have gotten a recommendation for it. We drove up to it, and it was on the end of a gas station.”

“But the place was completely full of locals!!”

“Of MEN! The only two women in the place were the cook and the waitress, who was wearing a skin-tight shirt that said ‘Baby Got Rack.’ right across her boobs.”

“So we’re eating our lunch, and in walks Jay and Betsy, two friends from South Carolina. I had no idea that there would be…FRIENDS…on our anniversary trip.”

“But when they walked in, Lydia burst out laughing and said, ‘You’re good. You’re real good.’ I just think you should know that.”

“Betsy walked in clearly knowing where we were going – she was dressed appropriately and NOT wearing wedge heels.”

“Yeah, but you looked GOOOOD.”

“So after lunch we headed to our destination. A State Park where you park at the bottom of a mountain and hike five miles uphill to the hotel to spend the night, eat breakfast, and then hike back.”

“Tell her, honey: what was your favorite thing to do in High School?”

“Hike. But that was a different kind of hiking.”

“So once I realized what we were doing, I pulled my hair dryer and makeup out of the backpack.”

“But hey! I carried the backpack. For the record.”

“So we had a lovely hike with beautiful views and good conversation with our friends.”

“We arrived at the “hotel”, and they began telling us all about the facilities. But I was completely distracted by the tiny tiny TINY bag of linens they gave us that was supposed to be everything we needed for our stay (and the apparent fact that we had to make our own beds on this anniversary trip,) and the Vermi Composting Poster on the wall. I had no idea what Vermi Composting was, but that poster taught me all about how Red Wiggler Worms can eat half their body weight every day, and how the camp feeds everything, including old sheets, to the worms.”

“We got to our room, and it was twin bed bunk beds. And a ridiculously narrow space between the bed and the opposite wall, which did have a hook to hang all of our belongings. There were no outlets in the rooms – the only plug was in the common bath house (which is where I had to pump and hope no one walked in while I was sitting on the bathroom counter listening to my breast pump talk to me,) and no cell phones were allowed,”

“Wait a minute. Your five kids were with a babysitter. What if there had been an emergency??”

“She would have had to call her Mom, I guess.”

“…and no trash cans. You were expected to pack out all of your trash.”

“And…your friends were on the bunk above you?”

“And the bathrooms. Although the showers were separated, the toilets were unisex. There were a row of what was essentially glorified wooden port-o-potties, and they didn’t flush – they drained into a giant shared hole in the ground – where all of the worms lived, eating up to half their body weight every day.”

“So. When you were sitting there, could you hear the worms…munching?”

(In a deep wormlike voice) “Thank you.”

“And when you lifted the lid of the “toilet,” you felt the cold air from the ground. And if, perchance, another guest entered another stall and opened another lid while you were still sitting, you would feel the pressure release, and a gush of cold air would rush directly…upward.”

“And then there was dinner. It was a common dining hall where all of the guests ate together. To get there, you had to walk THROUGH the bathrooms. There was a white board on the wall that had a calendar, and written above it, said ‘Food Waste Goal: 0.’ On each day, there was a sum of ounces left behind. If it was below two ounces, there was a smiley face. If it was above two ounces, a frowny face.”

“Why couldn’t they just feed the leftovers to the worms?”

“We don’t know. But we didn’t get to pick our portion sizes, so our friend Jay got served a giant piece of pound cake that he couldn’t finish. And it resulted in a group frowny face.”

“The next morning, we were eating breakfast, and this fantastic family with several children were sitting at our table. The kids had impressed us with how well they interacted with all of the adults, asking intelligent questions and engaging in conversation. But…the nine year old left a tiny bit of eggs on her plate.”

“Four kid-sized bites, maybe. So the guy in charge came over and loudly proclaimed, ‘Uh Oh!! We have some food waste here!!’”

“Then he took her plate, marched it to the kitchen, weighed her eggs, then came back and wrote the amount on the white board. With a frowny face.”

“When he came back over, I asked him, ‘What about all of that food left in the bowls and on the serving platters?’ and he said, ‘Oh – we don’t count that.’”

“And then after breakfast, we packed up, put on our rain gear, and hiked back down the mountain – five miles in the rain.”

“But not until after we bought a T-Shirt!”

As I was researching for this blog post and checking out the facility’s information and photos for myself (which clearly shows photos of bunk beds, for the record,) I felt the need to make a hint for next year’s anniversary. 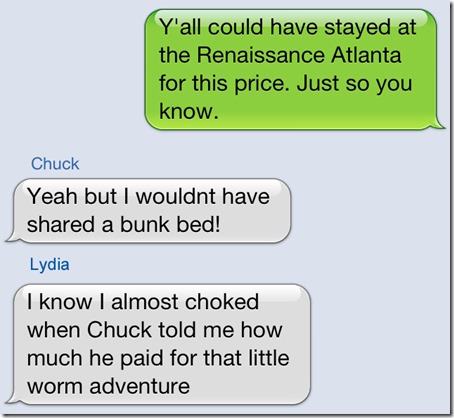 And I couldn’t possibly sum it up better than that.

16 thoughts on “When My Friends Told Their Marriage to Take a Hike.”