Last Friday evening, as the kids were getting ready for bed and I was addictively glued to CNN while the police were finally closing in on a stowaway in a boat in someone’s backyard in Boston, Chris went down to our garage for a minute.

In the process, he inadvertently created a stowaway situation of our very own. 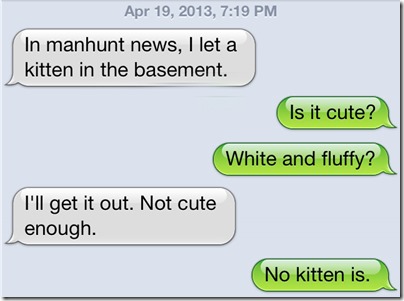 To help translate, the cute, white, and fluffy parts were sarcasm. The no-kitten-is-cute-enough parts were not.

For the past two years, Chris and I have harbored an extreme aversion to the idea of pets, as our last cat’s illness was difficult and long both for her and us, and managed to nearly ruin all of our carpet, and did take out both of our couches in the process. And, neither of our kids are animal people, so we decided that we would just be a pet-free family for at least the next decade or five.

But it was a cool night, and I felt bad. As did Chris, since before he came upstairs, he fixed up a cozy box with old baby pajamas he found rooting around in the basement, then put the cat and the box outside.

But I suppose my maternal instinct is stronger than his gift of mercy, so I went down to check on said kitten. The minute I opened the door, he ran in, purring loudly.

He was fluffier than I had imagined. And smaller. And devastatingly cuter. 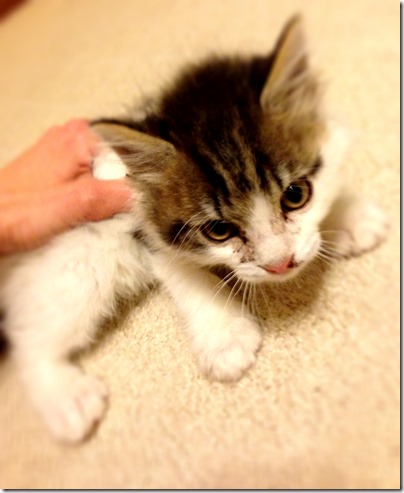 In a moment of weakness, I scooped him up and took him upstairs to let the kids see.

He was fairly clean (except for some eye gunk,) had no noticeable fleas or ticks, and was seemingly fed, but didn’t have any signs of being owned.

And he was extraordinarily and puzzlingly friendly to the children, 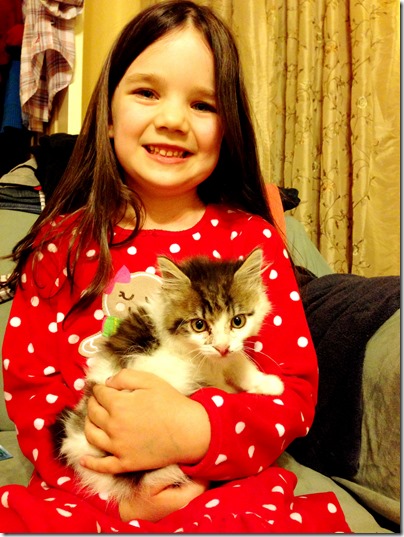 (Or at least to Ali – Noah, although he liked the novelty of a “titty tat” in the house, wanted nothing to do with him.)

I assumed he was a stray, put a photo up on Facebook, and tried to woo the general public into wanting him.

And the general public responded by telling me that our daughter had already claimed him.

So I texted our cat-owning neighbor, borrowed their cat box and some food, and Chris set him up a home for the night, complete with a litter pan made out of an extra wet wipe box.

We put him to bed in the warm basement, and said something like, “We’ll figure out what to do with you in the morning.”

Chris and I retired to the couch, both of us with running noses and inflamed eyes. Cat allergy is strong with us.

But the next morning, Ali’s first words were, “Can I play with the kitty again?”

So we brought him upstairs, somewhat surprised that our kid, who had zero interest in any animals, seemed so attached to this cat. 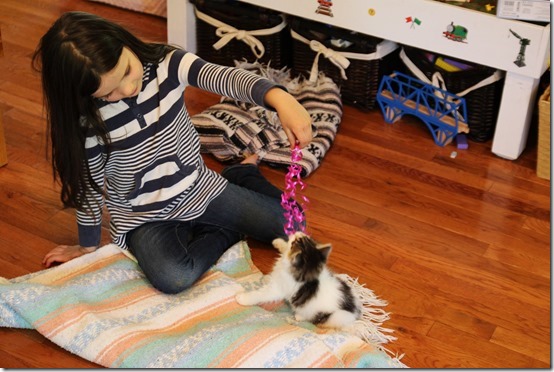 And he was cute. 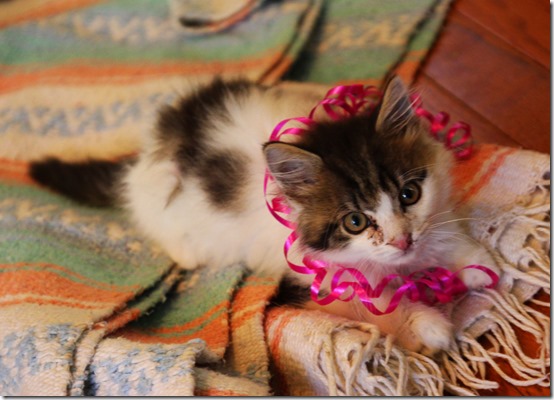 Noah, however, still preferred to be left alone. 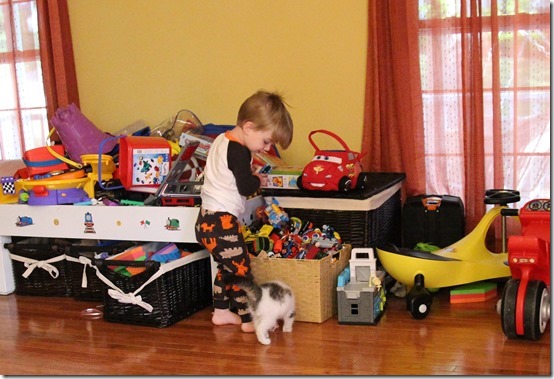 And tried to communicate this in any way possible. 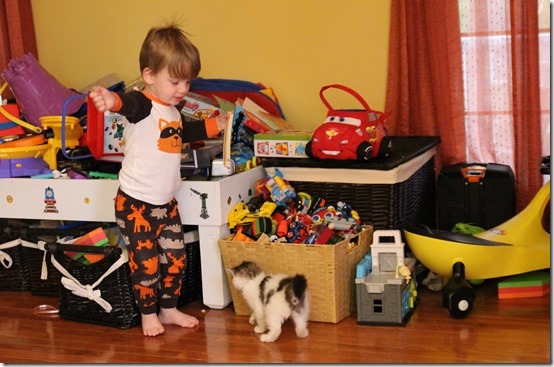 But usually lost the war for solitude. 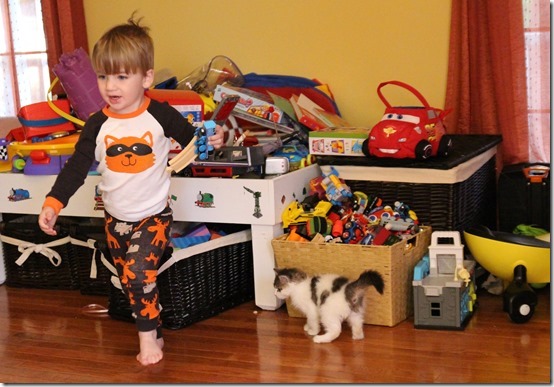 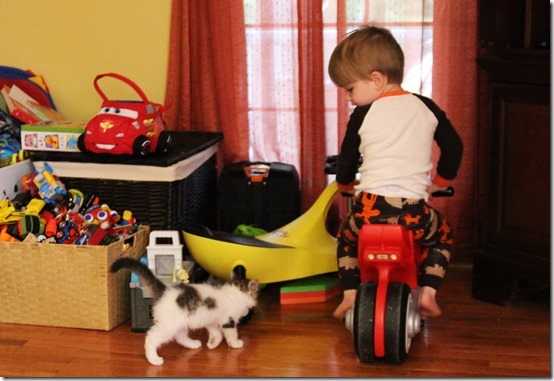 Ali was in heaven. She played with the cat with no complaints, difficulties, or sounds, for hours on Saturday.

The cat’s friendliness continued to be puzzling – it didn’t seem to have been born in the wild. But I couldn’t find any neighbors who were missing a kitten, and there were no posters out.

Saturday night was also supposed to be cold, so we locked the cat up, again promising, “We’ll most likely figure out what to do with you in the morning.”

I was starting to feel very Dread Pirate Roberts about my nightly promises.

On Sunday, we decided to experiment. It was going to be a warm day, we were to be gone for a while, and he came from outside, so why not let him back out for a while? He might find his owner if he had one, if we were lucky. We left him some food and watched him as he sadly watched us drive away.

When we returned at 3pm, he was excitedly waiting for us, jumping at the kids legs and purring loudly. 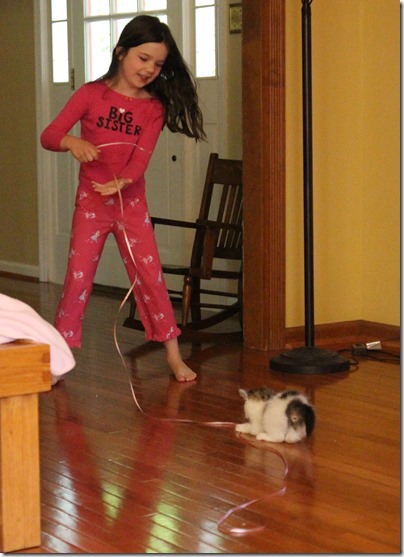 So I let Ali play inside with him again during quiet time, and Chris and I came to terms with the fact that:

a. No one was begging us for this cat,
b. He didn’t go back home, and
c. Perhaps he could stay on as an outside cat.

Also, my text messages with Chris were starting to subtly expose the turning tide of my anti-cat resolve… 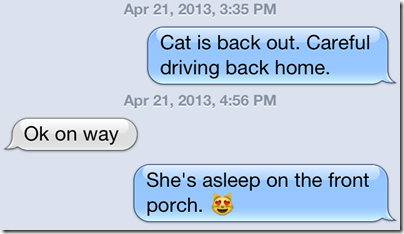 So on Monday morning (after testing Sam’s outside-abilities by letting him sleep out the night before,) I asked Ali:

“What do you want to name him?”

“If he doesn’t claw at the window and meow outdoors all night, he can be a mostly-OUTDOORS cat.”

“I think his name should be Sam.”

“Well, because I have 2,000 Party Friends and they all have different names and it’s hard to find a name that one of them doesn’t have and none of them are named Sam.”

“But I thought your first Party Friend ever was named Samuel?”

Ali was elated at the turn of events. 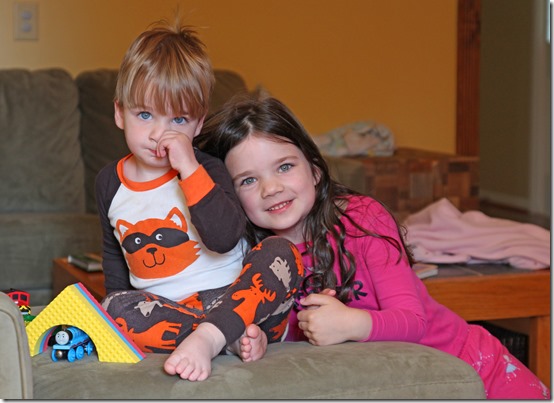 A minute later, Chris texted me, the worry in his tone betraying his own change in emotional attachment. 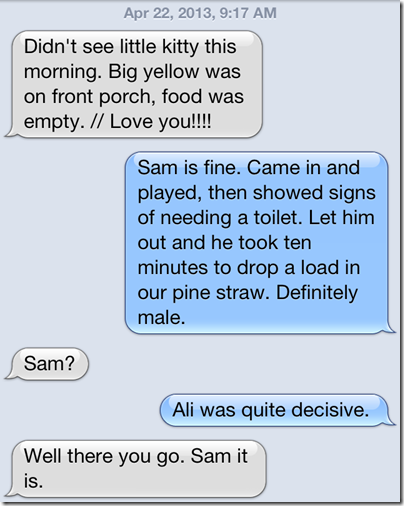 We headed out to visit my parent’s that morning, so we let Sam out to play again, confident that he would be waiting excitedly when we returned.

Surely he’s just on an adventure…

But we didn’t see him for the rest of the day. Or the night.

Ali missed him greatly, and even Noah asked a couple of times, “Where’s Sam??”

Chris and I felt guilty. Sad for the kids. And maybe a little sad for us…because we’d gotten more attached than we had intended.

That evening after the kids were in bed, we turned on a random episode of The Big Bang Theory.

The episode was The Ornithophobia Diffusion, in which Sheldon spends half the episode desperately trying to shoo a bird off of his windowsill, and then the other half overcoming his fear of the bird who managed to fly into his house.

Of course, right as Sheldon has fallen madly in love with the bird and vows to take care of her and all of her progeny until the end of time, she flies back out the window.

He stands, leaning out the window, screaming at the long-gone bird, “COME BACK AND LET ME LOVE YOU!!!!”

The irony was not lost on us. But we dared not discuss it with each other for fear of showing our deep emotional vulnerability over the loss of a tiny kitten.

The next morning, our catversations continued. 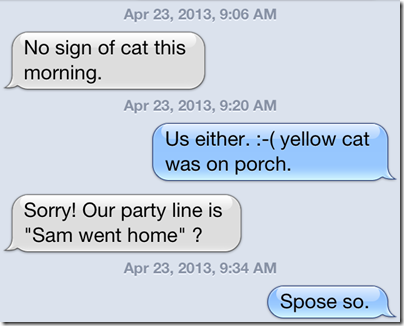 Although I wasn’t to the level of remorse that Chris had apparently delved into, I did feel a measure of sadness all day, as if I’d let my child down. Should I have never let the cat out? Should I have coddled him and allowed him to stay indoors until he was full-grown?

We prayed for Sam at breakfast and lunch. Ali prayed that he would come back. I just prayed that we could know he was okay.

That afternoon, we were in the yard when a neighbor that we don’t know was driving home. He had a new car, so I was half-interestedly watching as he pulled up in his driveway.

His tween daughter met him at the back fence, and from a distance, I saw her hand him something small and fluffy. He held the fluffball up excitedly, then handed him back to his daughter.

I ran across our yard while carrying Noah, and with Ali curiously trailing behind me.

“Hey!! Random question – was that a kitten you were holding?”

“Yes! He went missing and we didn’t know where he was. Just showed back up!”

I quickly told him the whole story, thereby confessing to inadvertently stealing his daughter’s cat for 72 hours.

After spilling the story, I ended with “Over here his name is Sam. Who is he over there?”

“He’s Sorn over here. I’m sure he’ll come visit you again sometime! …But we’ll be sure to lock him up better at night.”

Ali took the news very well, oddly okay with the fact that SamSorn belonged elsewhere, and later, simply asked if we could visit him sometime.

“Absolutely we can. As long as the neighbors agree to visitation rights.”

So. What did I learn from this?

1. Never try to give away a kitten on Facebook. Because no matter how cute he is, no one will want him. Also, he might belong to your neighbor.

2. I can no longer use the excuse of “my kids don’t like animals anyway” as to why we don’t have a pet. Must inject them with allergy shots. And by that, I mean shots full of allergies.

3. Even though Chris and I were both tempted, naming a cat based on the events happening when you found him is not always the best decision – Both Dzokhar and Tsarnaev make awkward pet names. Let him be Sam.

4. Sometimes, God chooses to answer my prayer over my daughter’s. And then I feel guilty. So I should just pray her prayer instead.

5. Stealing your neighbor’s beloved pets is a great excuse to meet them.

22 thoughts on “The Complete Saga of Sam the Cat.”