For the past nine months, Ali, Noah and I have been making weekly treks to Ali’s ballet class. It took us a while to find our place in this world, and Ali has gone back and forth, wavering between whether ballet is the most fun she has all week or something to be avoided at all costs. But we accomplished the year.

And our reward for our dedication was recital and all of it’s containing pomp. And circumstance. 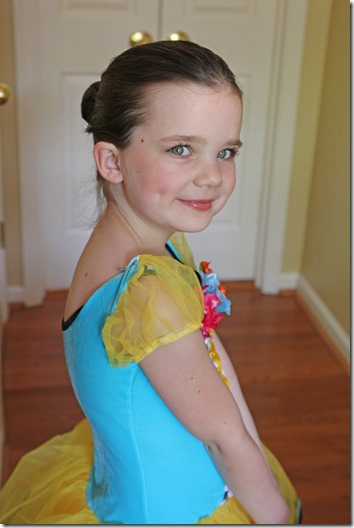 We had dress rehearsal on Friday night, and the four-page recital instructions commanded that everything be done just as if it were the performance.

Which was good, since it took me three applications of (the very specific) makeup for Ali to get used to the idea.

(Mascara ungraciously intruded on her idea of personal space.) 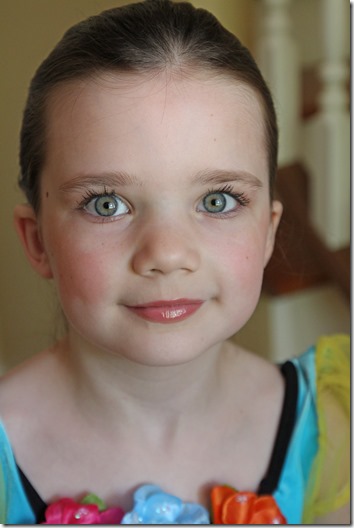 (And I still stink at making a proper ballet bun.) 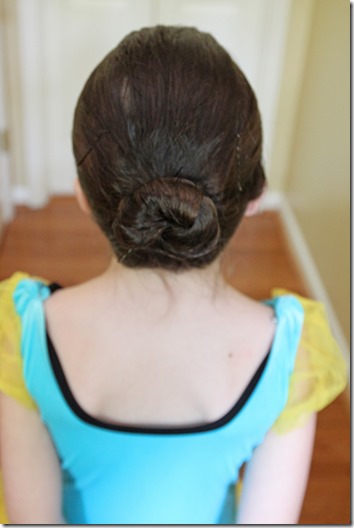 (But wow – hair nets make all the difference. The fact that I didn’t discover hair nets until the very last day that I would ever need them is more farcical than realizing that all I had to do to get my two-year-old to quit pooping in the bath was to tell him not to.)

Since dressing up like a princess is basically her profession, Ali adored her outfit, enjoying the poofy tulle, 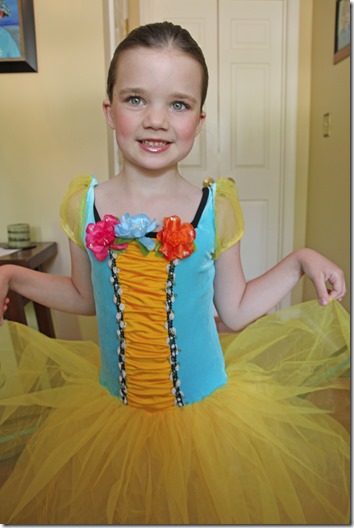 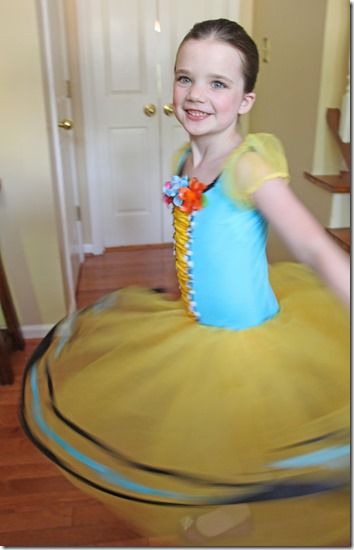 She basically floated on air the entire weekend. 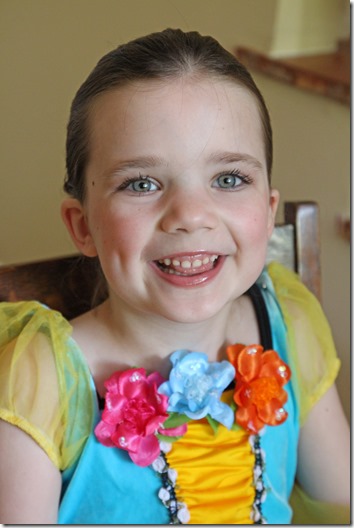 Friday night dress rehearsal was our only chance to take photos and video, so I did an extraordinarily thorough job.

All of the classes, each representing a different country, lined up and sang. Because what is a ballerina if not a singing ballerina?

Since it was her recital (or, in the case of the photos, dress rehearsal,) I thought it only fair to let Ali do the blogging. So I interviewed her about the experience and typed verbatim what she told me. Her answers are in bold.

It was fun to sing and my favorite was Oh How I Love Jesus. It was hard to do the hand motions without hitting other girls so I just had to do it behind their back because I wasn’t up enough and I didn’t realize it so I was behind a little bit and didn’t realize it. 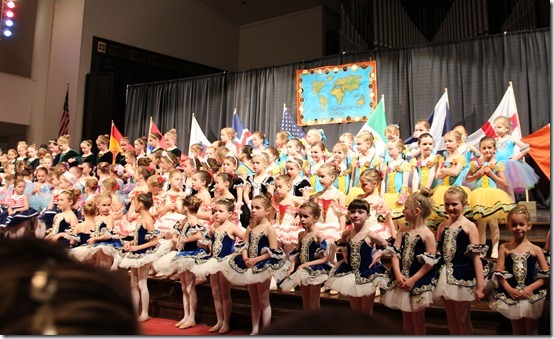 (Ali is the third Yellow tutu from the right – the one looking around analytically rather than doing the appropriate girl-smacking hand motions.)

Well it was very fun watching the other girls, but in the dress rehearsal, I…um…didn’t know that that there was another girl before us after the blue girls that danced but I think they were five, and, um, that’s all I can say about the other stuff about my recital.

Each country did it’s own performance, causing much outfit envy and outfit relief in the Mommy Section, and, as I found out later, from the ballerina section.

Oh – that’s Ireland. I liked their outfits and, you know, they went first, right? 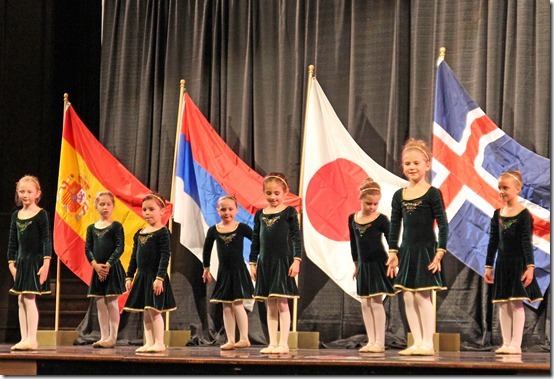 Brazil was pretty too and they had rainbow skirts. And I liked watching them and they were, Uh…which flag were they? 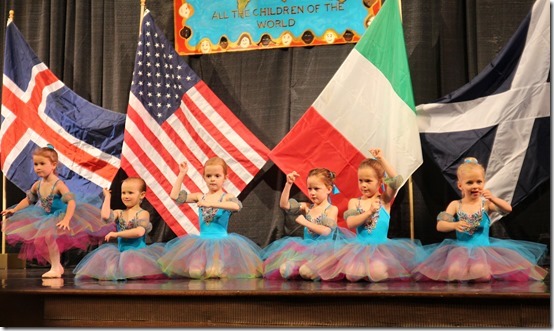 Uh, Spain. Spain was pretty, but it really wasn’t…the prettiest. 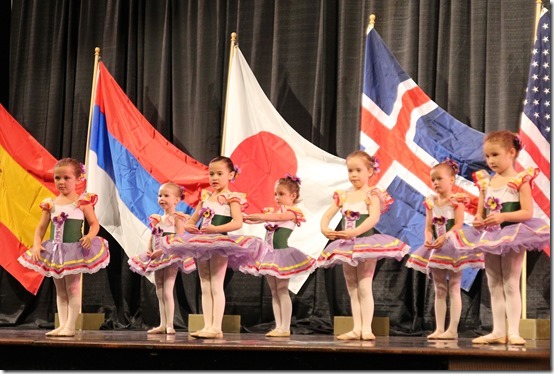 (Upon later reflection, I think that was actually Italy, not Spain. But I don’t blame her for her not-so-unfounded conclusions.) 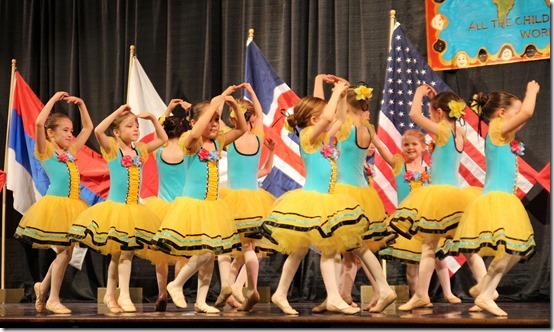 Part of her class’ performance included a little acting, where Ali came up to her partner and asked her to dance. So I asked Ali,

Did you like asking her to dance with you? 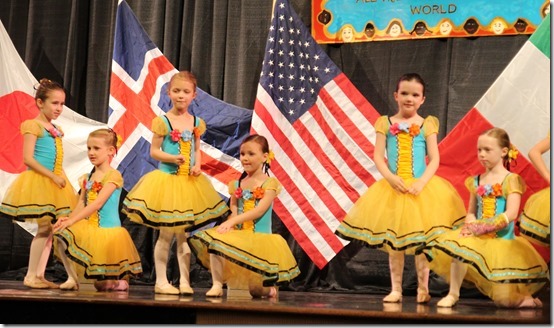 After you asked her to dance and you danced together, was that fun?

Um, yes. But it wasn’t my favorite. I liked watching…nevermind. 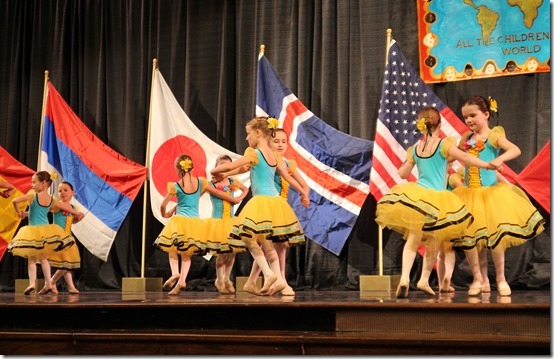 Did you like it when you lined up on the stage on your knees?

Well, it was kind of hard. 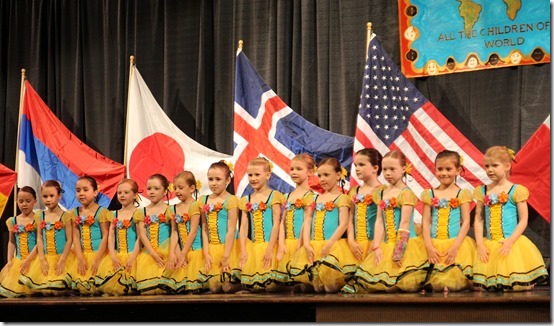 How about when you got to go behind the other girls and have a little bit of a solo dance?

Yeah, I liked doing that and I liked spinning while the girls were around me. It was…um…kinda…my favorite part. (nervous laughter) 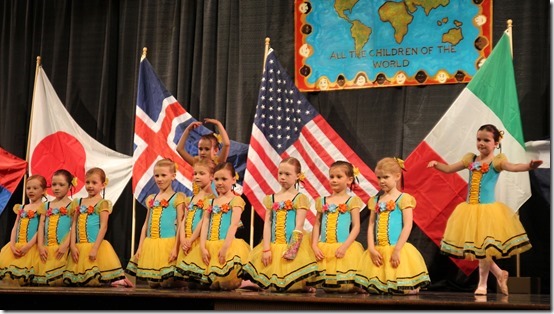 Did it make you feel special?

No. Noah’s making me nervous. 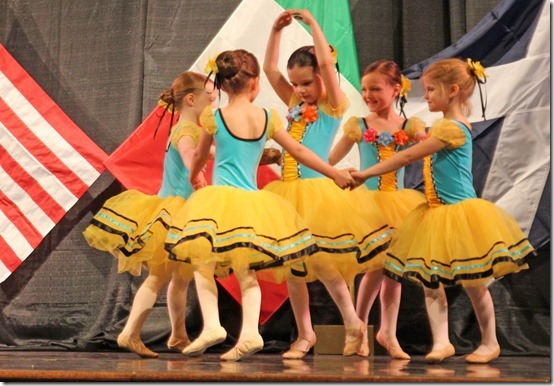 What about when you asked your partner to dance again and she told you no? Did you like that part?

Not Really. But all the girls did that, because that was what our teacher told us to do. 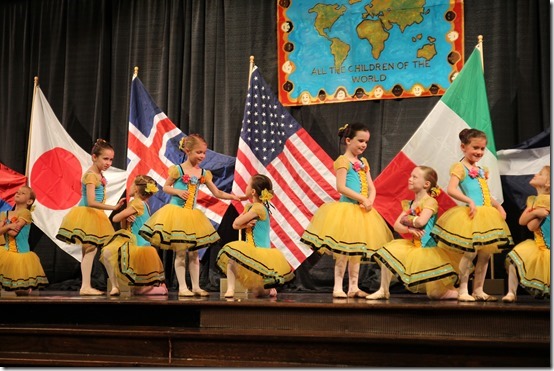 Japan was also one of my favorites. Umm…well, they were very pretty, but why didn’t they wear pink I mean orange instead of blue, and blue on their sleeves instead of pink?

Well, it…it wasn’t really normal at all, but they were very pretty. 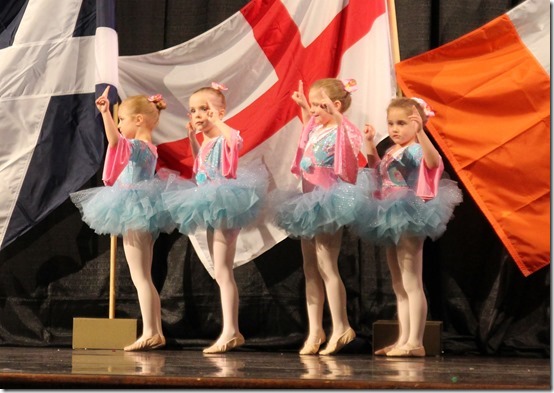 I pulled up the photo of England… 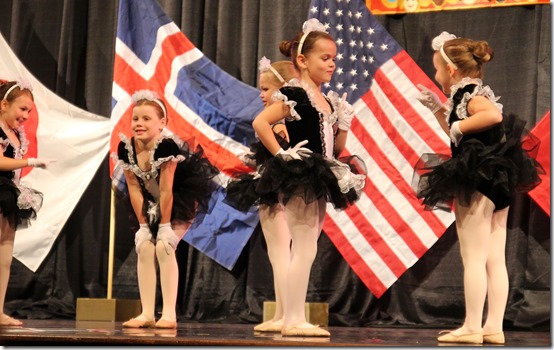 Well, I ummm….did…did…did…I, well their outfits weren’t as pretty, but…but they did do…I liked watching them.

Aren’t they American? Well, they were pretty, but, um…why did the boy…why did he do different stuff than the girls?

Because he’s a boy. 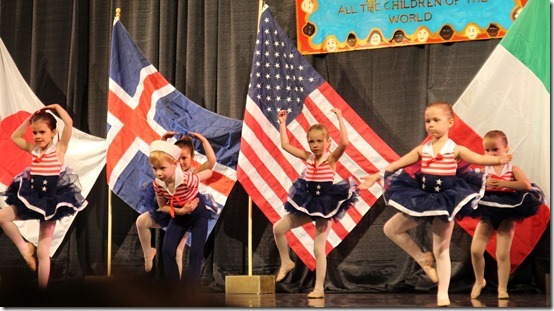 Alright. They…one girl in my class said something about them and she said that she was jealous that they were wearing pants and not a skirt but I liked them a lot. What’s that thing that was on their head? 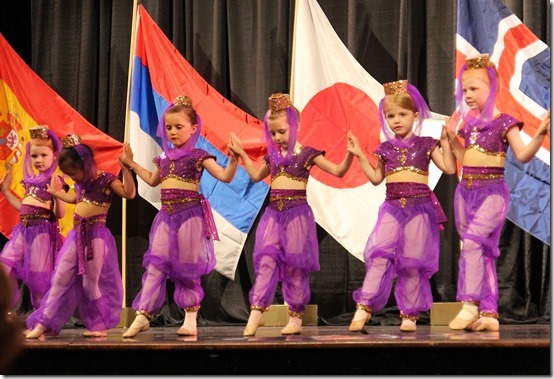 I can’t remember what country they were. Well, they were very pretty and I think I looked at the TV on every country, but…maybe not. 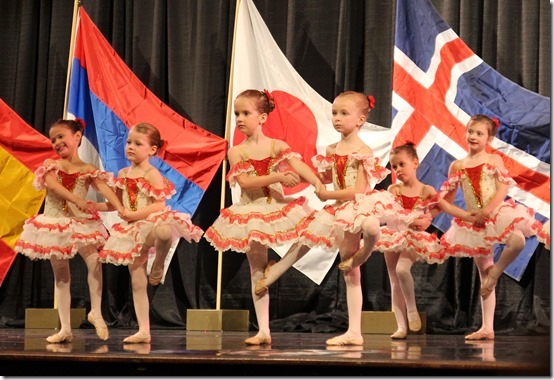 (I believe that they were actually the previously mislabeled Spain, for the record.)

Um, we did do a pose like that, but we decided to do the sitting on the knee thing instead. Their outfits were…kind of…the least that I liked. And that’s all I can say about them. Incept what I just said right now. 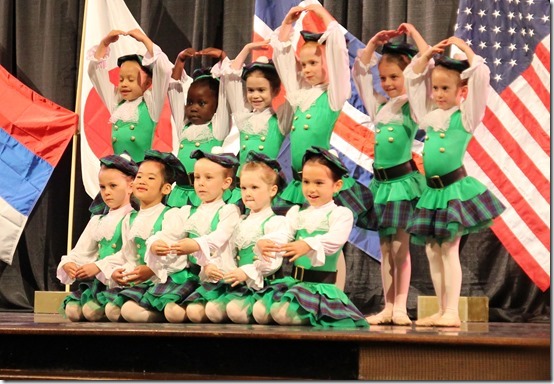 RUSSIA WAS VERY PRETTY And they have the same first position and let’s see…they were very pretty and I liked watching them too and they looked like kind of a little bit older than me. Well, she does. 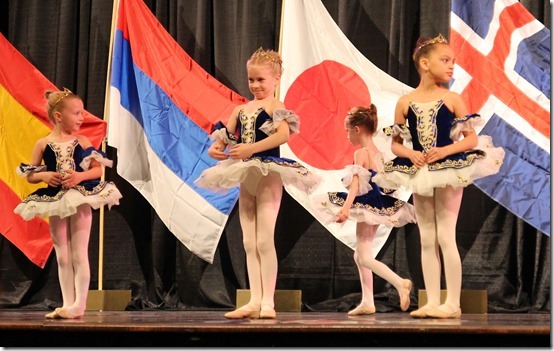 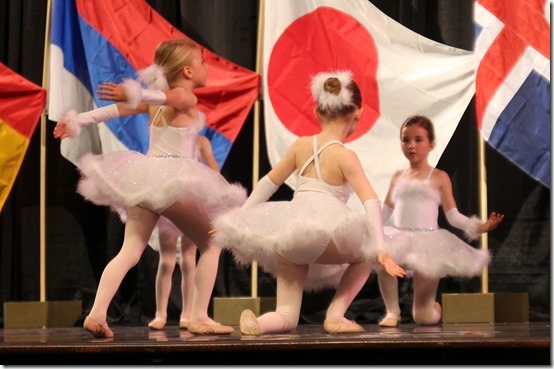 So. How did it feel for me to put makeup on you?

uuuummmm….heh… (girlish giggle creating a dimple situation) …I liked it. 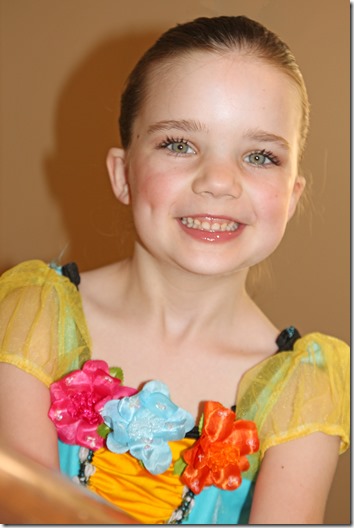 And what did you think about the day of your performance, when everyone came and watched?

I don’t really have anything to say about it. But I liked getting my flowers. 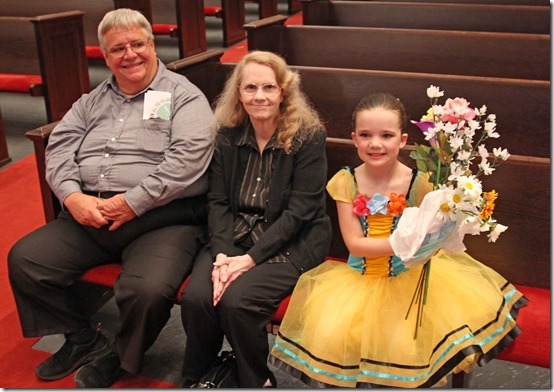 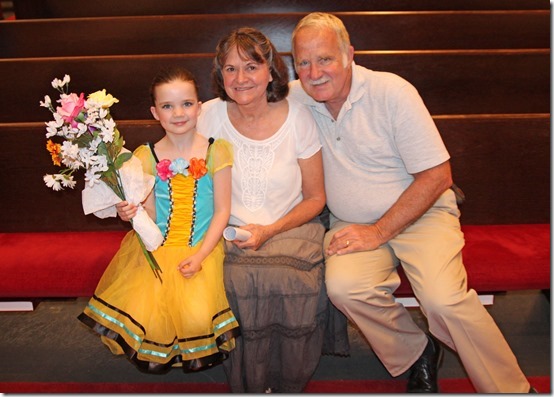 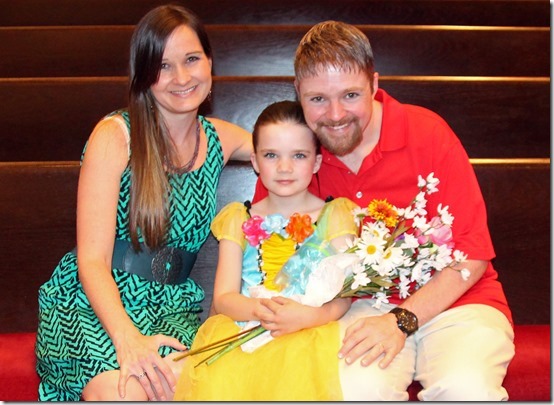 And next year, I want to take Art Class instead.

32 thoughts on “The Rise and Fall of a Ballerina’s Career.”