On Saturday, I took a road trip by myself to Jackson, Mississippi for a Vault Party.

Although I don’t normally travel to do jean parties, two of my long-time blog and twitter friends, Sarah and Megan, had invited me to come.  So besides the fun of offering makeovers to dozens of women’s butts, it was an opportunity to have a blog meet-up, something that I try to do as often as possible, because you guys are all so cool.

And just a few miles after I crossed the state line, I knew why I had come. 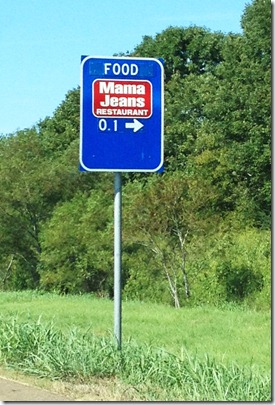 We had a fabulous party, I loved visiting with Sarah and Megan, and I am still kicking myself for not getting a photo with them.

Chris and I had decided that I would stay the night and have a Mommy’s retreat – after all, my last three weeks had consisted of a printer panic attack, Chris being gone for four days, an abscessed tooth, Noah getting his first stomach virus, Noah gifting me with said stomach virus, and a couple more days later, I found myself getting reacquainted with the letters UTI.   And all of this was interspersed regularly with minor tragedies such as this one: 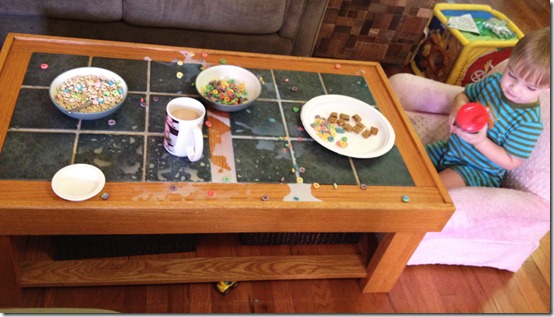 (Which, for the record, was my fault, not the incriminated-by-photography subject that can be seen to the right.)

Sarah recommended the King Edward Hotel, a stunningly beautiful landmark built in 1923 (but recently rebranded as the “Hilton Garden Inn Jackson”, a clear case of a treacherous renaming – nearly as grievous as my beloved department store, Parisian, getting renamed to Belk.)

Does this look like a Hilton Garden Inn to you? 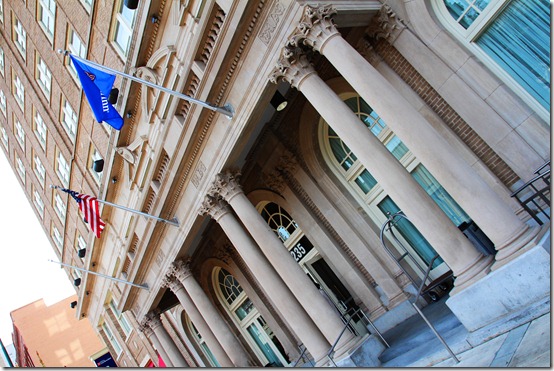 No.  It looks like The King Edward Hotel.  So let’s call it that.

I have a quirky bit of snobbery about a hotel’s atrium.  If it doesn’t feel grand, then I don’t enjoy my stay quite as much.  When booking a hotel, I always scour the online photos – just to make sure the atrium is going to provide me the ambiance that I desire.

The King Edward Hotel passed this test with gusto. 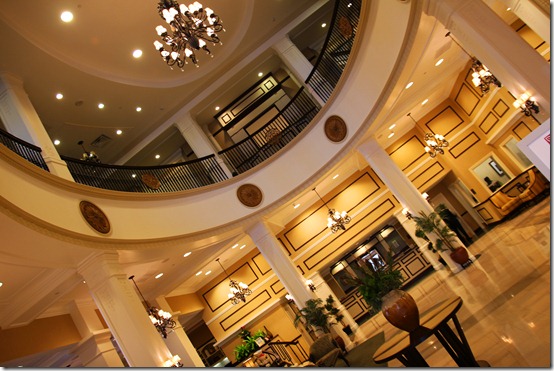 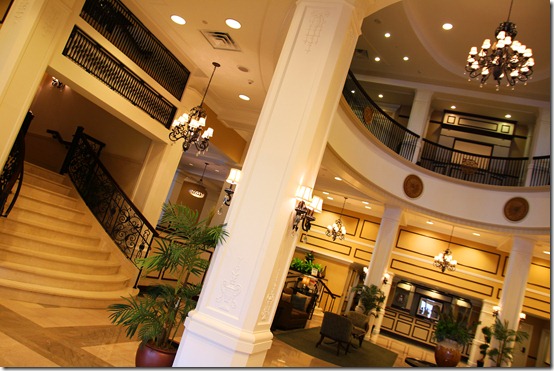 After I checked into the hotel and made myself cozy, I planned on having a long evening of getting caught up on writing blog posts, reading your blogs, and in general, as I mentioned, getting caught up.

…right after I ordered room service, which consisted of a perfect blend of two of my favorite things, Mediterranean Shrimp Tacos, 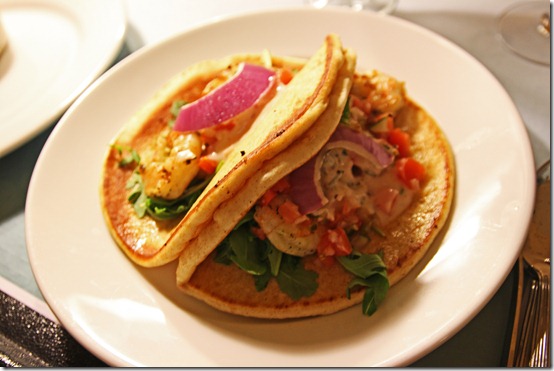 And a Chocolate Pecan Torte, which was so richly divine it lasted two days. 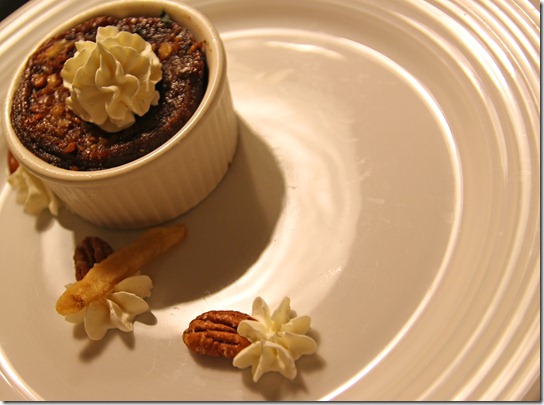 Then I tried to get to work again, but I found myself relaxed…and distracted…and tired.

A little while later of getting nothing done, and Chef Nick, who is a friend of Sarah’s, sent this unexpected late night delivery up to my room: 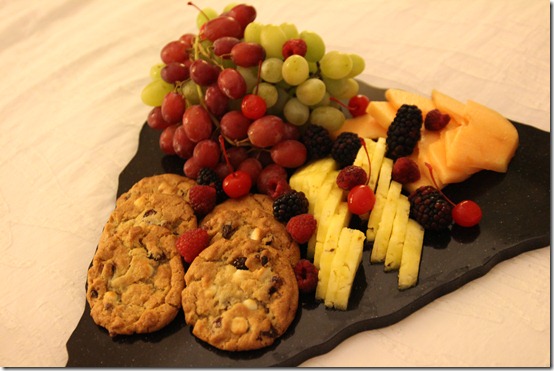 And those cookies were still HOT, reminding me what southern hospitality really is.

(Something that I often need reminded of, since my husband so accurately once told me, “Hospitality isn’t your gift, is it?”)

So then.  To get something accomplished.

But my eyes…they were so tired.

And my head…it was so scrambled.

And my feet…well they had nothing to do with blogging but they hurt.

And those cookies…were so tasty.

And so I slept.

And slept some more.

During the night, I heard a faint but steady rumble, getting closer and closer.  It was such an odd noise, so faint yet so close that I could feel it.  In my sleeping state, I actually spent a good five seconds wondering if the world was coming to an end while I was in Mississippi.

Then I remembered the quaint view that I had seen outside of my window the day before. 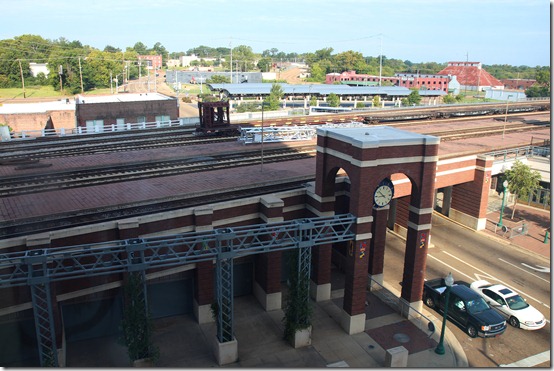 As I fell back asleep, I pondered how thick the windows must be if that’s all the train I could hear.

I woke up the next morning, but didn’t open my eyes for a good 30 minutes.  I just lay there, no idea what time it  was, and not at all caring.  When I finally did decide to get up, I was ready and excited to get some of that blogging done.

But then I noticed a piece of paper under my door – a note from Chef Nick, inviting me downstairs to have breakfast.

And so I went.  And I ate fabulous food.  And I didn’t blog.  Again making me the worst blogger ever.

Then I walked outside, and immediately felt wistful, the streets of Jackson reminding me of the historical Birmingham photo books 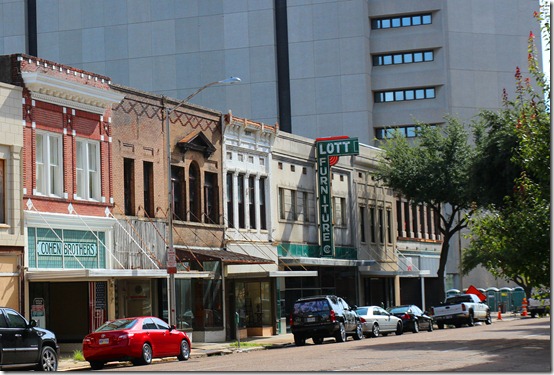 (Other than the vintage of the automobiles, anyway.) 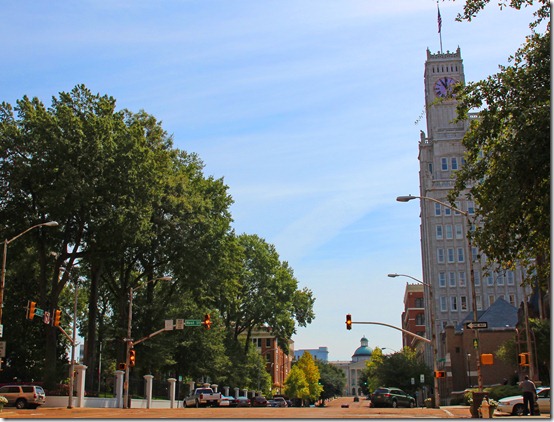 There were so many things about this city and the people there that made me feel reminiscent of how the south should feel.

I had noticed at the party the day before that Sarah, Megan, and their guests had an unidentifiable facet of southern culture that I didn’t possess – and the hotel staff had it, too. It was almost as if they were genuine southerners, and in comparison, I was someone who lived in a big city that just happened to be located in the south.

Yes, Birmingham is a southern city and we have innumerable southern tendencies and habits, but they seemed to have the true Southern Spirit – Sarah and Megan knew everyone in their small town, the waiters at breakfast visited jovially with me as if they had nowhere to be until sometime next week, and no one in that city seemed to be in too big of a hurry to proactively seek out a personal interaction with a complete stranger.

It’s hard to put into words, but there was a genuineness and unabashed interest in other people that I suddenly felt as if I was lacking in comparison.

On the way home, I realized how very much I had needed that trip.  The past month and a half have been rough, and they’d left me quite fatigued.  Because of that, in the weeks leading up to the trip, it had felt like one more exhausting thing on my to-do list.  But the beautiful environment, the warmth of the people, and the silence of being by myself provided exactly what I needed: some time apart from my to-do list.