I’ve had opportunities to get to know several of you a lot better lately, and I’m loving it.

…Meridith has been, by request, making me aware of differences in dialect and habits between me and Australia.

…EleanorJane, my resident differentialist between New Zealand and I, just moved to England and, therefore, has a whole new set of interesting facts to share.

…and Kristin has been enabling me to reminisce on my college days, as she’s a professor at my alma mater.

(We were even able to put together that I took a class from her Dad 12 years ago!  I love our small big city.)

I’ve also had the opportunity to meet several of you in real life recently, which is nearly as exciting as Leo unveiling a new piece of Toenail Art.

…We stopped off in Greenville, SC on the way to our family vacation to meet Lindsay, who was an excellent tour guide for her awesome city.

…After years of tweeting, I was finally able to meet Brandi at our Alabama Blogger meet-up last week, as well as hang out with some of my favorite local bloggers, Jamie, Kat, Robin, Amy, and Matt, and a new local blogger, Michael.

…And our whole family has deepened our relationship with Giann, who has become our beloved babysitter, even scoring her own line item in our family budget.

And those of you I don’t know yet, I love you too – in advance.

So it makes total sense that, last weekend, I packed up my whole family and drove to Atlanta to meet a Washington State blog reader and her family.

One of my longest blogging friends, R (who is wisely more cautious with her online identity than I), was on vacation with her husband, kids, Mom, and Aunt.  We’ve been in nearly daily blog contact for the last four years and have both always agreed that if we had happened to live near each other, we would be best friends.

So we knew that if either of us ever got even relatively close to each other, we absolutely MUST take the opportunity to meet.

They were flying out of Atlanta and back to Washington after a trip to Disney World and the Florida Gulf Coast, so we booked rooms next door to each other at an Embassy Suites in Atlanta the night before they left.

That, my friends, is sacrifice. 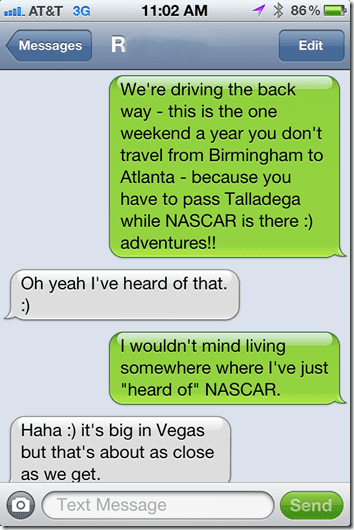 But, shockingly enough, we must have hit it at exactly the right time, because we were able to pass by without getting a single beer thrown through our window, or peed on by any dudes standing on the top of their campers yelling “yee-HAW go Number Ayety Ayete!!!” while they relieved themselves from the roof.

At which point, Chris asked, “See, aren’t you glad I’m just a football fan?  I could drag you out to NASCAR on the weekends.”

“No, no you wouldn’t.  Because we would not be married if you were a NASCAR fan.  That would have clearly been a deal breaker.  Being a football-fan-by-marriage is very near the precipice, but NASCAR would have been over the cliff.”

But we finally arrived, and transforming our relationship from screen to IRL was as natural as I had always assumed it would be. 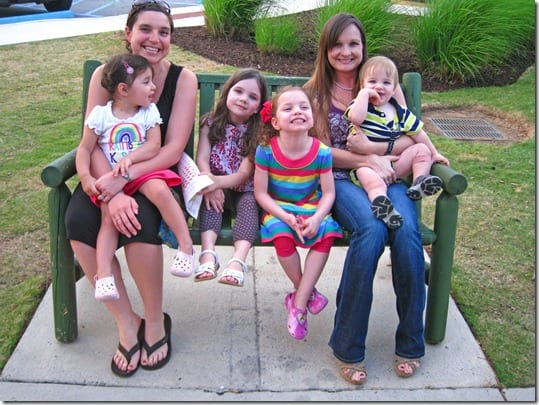 …except for the fact that I am never more aware of how ridiculously often I say “y’all” until I’m around a bunch of people from Nonyall Country.

Y’all know what I mean?

We were able to take them to one of our favorite Birmingham-based restaurants, Jim N Nicks, that just happens to have locations in Atlanta.  After telling them everything that was delicious and southern and fabulous, I asked R my favorite question for visitors.

“What’s the weirdest thing y’all’ve noticed about the south?”

“All of the ‘boiled peanuts’ signs along the highways!!”

“I’ve wondered that very thing myself for years.”

(And anyway, P-Nuts sounds like some manufactured, laboratory peanut, or perhaps  “made from peanut product” or something.  Buy peanuts, not P-Nuts, people!!) 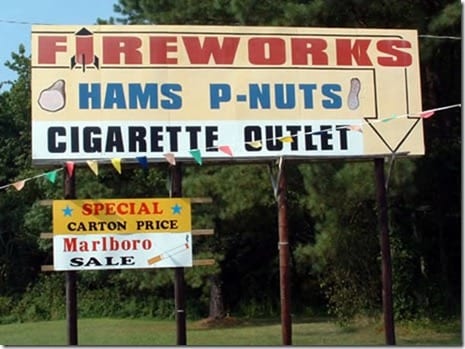 Ali and K are the same age, and they immediately bonded over pestering Noah. 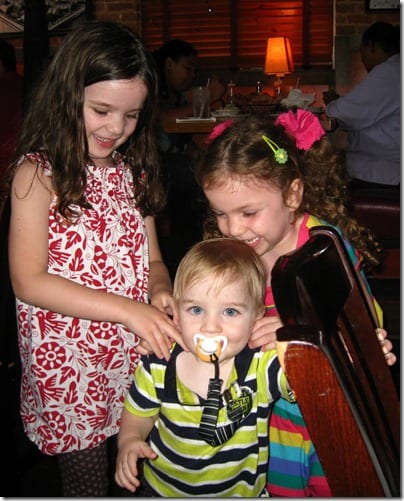 …something that he doesn’t seem to mind so much. 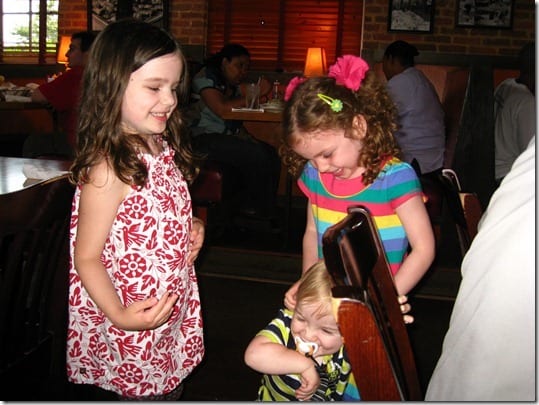 When we left the restaurant, we had a 25 minute ride to the hotel.  Ali and K were already inseparable, so K rode back with us.

As we were getting in the car, Chris whispered, “I don’t know if I would be that trusting.  I mean, we just met these people, and they’re letting their kid ride with us?!  Wow!”

“Babe, R and I have been friends, talking daily, for four years.  We DID NOT just meet.  It just seems that way.”

At the hotel, they increased their closeness over technology.  Because that’s the medium that kids use these days to get to know each other, you know? 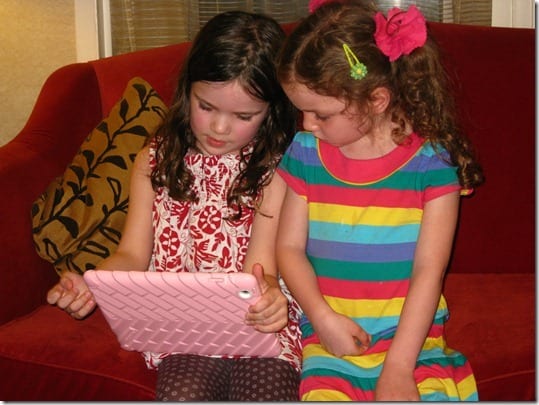 (Well, at least that’s what her mother and I used.)

Meanwhile, Noah and S were also getting cozy. 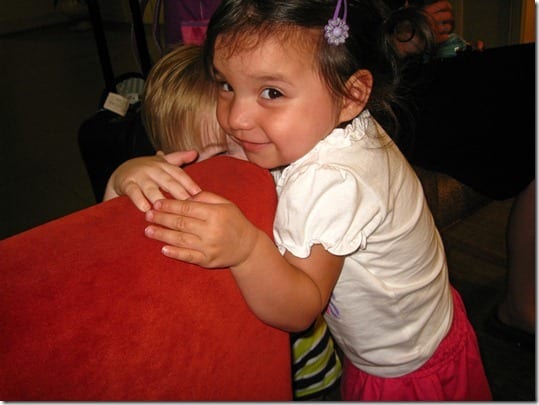 Later, the kids had a rousing game of Wolf and Sheep, where those ridiculous cylindrical hotel pillows actually came in handy – as a battering ram to protect the girls from the Big, Bad, One Year Old Wolf. 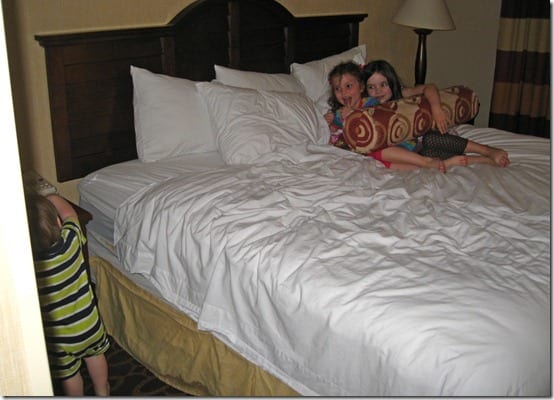 Over the cacophony of our children, the parents also bonded – nearly as much as the kids did.  Chris and I kept them up way too late talking (as southerners tend to do) and then felt terribly guilty about it (as southerners also tend to do).

And it was sad for all to say goodbye.

Because that’s the thing about blog friends – it’s both wonderful and heart-aching all at once.  You make close friends that live thousands of miles away, and then you find yourself wishing with all of your heart that they could all move next door, immediately.