I was probably about six years old…

We were headed out to our cousin’s house.  They lived in the country, with miles of trails to explore.  We arrived at their house, and I saw their bikes and my brother’s bike (which he had left there at our last visit), and immediately knew that a biking adventure was in the plans.

I had no bike with me.  Crushing disappointment.

Mom and Dad simultaneously gasped and looked back at me.

Despite there being no punishment due to my lack of understanding, my overactive conscience attacked me all day long.  Not only did I not enjoy our visit because I forgot my bike, but for the entire visit, I remember sitting, alone, near tears, marinating in my overwhelming guilt regarding my filthy language.

But what I don’t remember is who taught me that word.

Ali, however, was able to tell me exactly where she learned it. 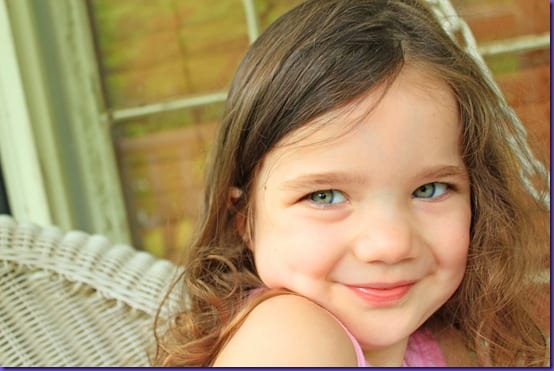 We were in Cahaba Heights last week, and as Ali does nearly constantly these days, she was pointing to all of the uprooted trees and crushed roofs and saying, “Wow! Look at all that tornado damage!!”

We talked about the trees, about the flattened fences, about the houses with tarps on their roofs – just like we do every time we drive through.

Then she asked… “What’s the first part of that word Damage mean, Dam?”

“Well, It’s a wall that holds back water…”

“Where have you heard that word?”

“One of my party friends taught it to me.”

Somehow I think it will be time to put those pretend friends in time out again soon…but at least since Ali’s tummy pretty much stays there, they’ll have plenty of company with which to swap newly learned curse words.

* Serious, in this case, is defined as “not quite mean, but also not happy.  So she’s just ‘serious’.”   And also in serious trouble – if I can ever find her.