Yesterday morning, I noticed some red bumps on Ali.

Due to where they were, I assumed that it was a heat rash due to our hour and a half of blueberry picking in the extraordinarily hot Alabama sun the day before, but decided to keep an eye on them.

By last night, they had quite rudely spread further, and were starting to look raised. Being this this morning was Church, and other parents, in general, frown upon bringing children to Sunday School with communicable diseases, I mentally noted to do a full body scan again before we went to church.

This morning, it was a definite diagnosis of no Sunday School. Now some of them were raised and had yellowish pus in them and very suspiciously looked like….The Pox.

Chicken Pox, that is.

Ali had gotten the vaccine for that unmentionable disease, but I knew it wasn’t foolproof. I called several “experts” (i.e. my Mom and my nurse friend Lydia), and everyone agreed that it did indeed sound like The Dreaded CP.

I called in to the nurse on call, and she also, much to my chagrin, agreed.

Normally, I wouldn’t mind a case of the Chicken Pox. I mean, it’s not something I look forward to, but it’s workable, and somewhat of a rite of passage of childhood (and parenthood).

BUT. We’re supposed to go on vacation at the end of this week. With another family. With small children. And swim in pools. With even more people. People that, I’m sure, frown on seeing communicable diseasy rashes on other kids swimming in the pool with them.

So the Chicken Pox would mean certain Vacastrophe.

AND, I’m pregnant, and although I got a (very nasty) case of the CP when I was a kid, I have some itchy bumps myself that I thought were something else but if they weren’t…it’s quite dangerous to mix Pregnancy and Chicken Pox.

So the Chicken Pox could mean potential Pregastrophe.

SO, with these concerns and the confirmation of all of the experts and the fact that our doctor’s office will be closed Monday for the holiday, we decided to do the ultimate: take Ali to the after-hours clinic. On a Holiday.

We called to make our appointment, and you would have thought I had said “Swine Flu” – or “bomb” in an airport. They told us to call when we arrived BEFORE we came inside, and they would take us through the side entrance so as not to darken the door of the waiting room. Which meant no wait – on a holiday weekend! Who knew? Communicable diseases equals the number one spot in line!

Sure enough, they sent an escort to meet us, who whisked us away.

THEN, to really drive home the point that we were potentially carrying a Biological Weapon disguised as a three year old, they made Ali wear a mask.

And when I say “made”, let’s just say I’m glad Chris was with me, or it wouldn’t have happened. 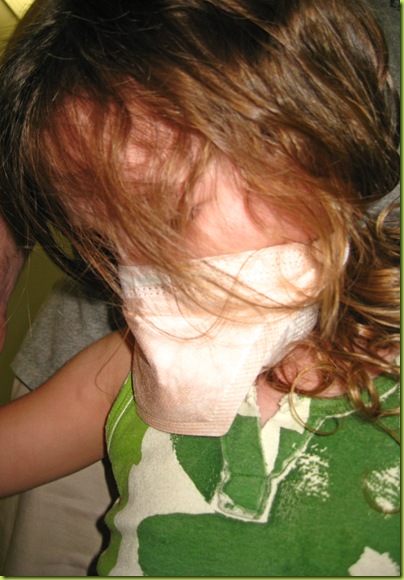 You would have thought we’d just put her in the cone of shame. 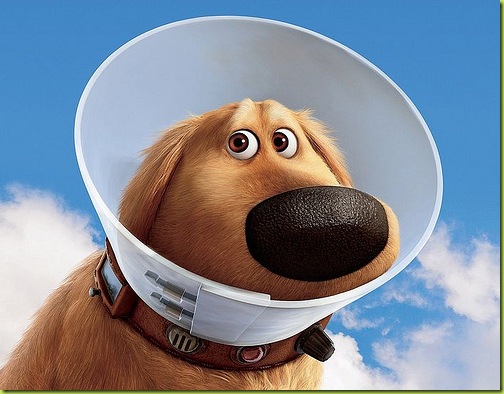 (And no, I didn’t take that photo of her for this blog out of the cruelty of my heart – I took it trying to cheer her up and show her how she looked like Daffy Duck.)

(It didn’t work. Nothing could overcome The Mask of Shame.)

The nurse agreed that it definitely looked like The Dreaded CP, warned me that I needed to call my Obstetrician the SECOND Ali was diagnosed to prevent Pregastrophe.

When the doctor arrived, she very kindly examined Ali, talked through everything, and decisively diagnosed her (and, therefore me)… 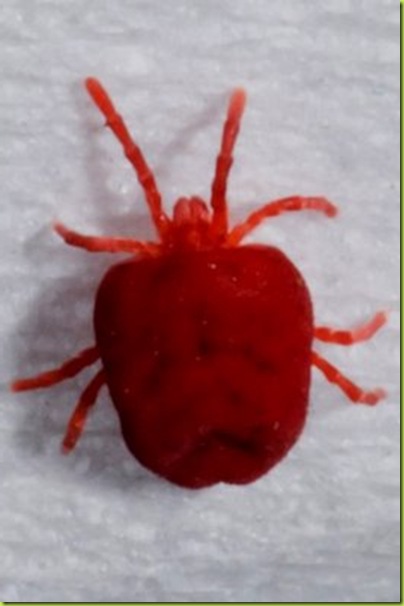 …from the aforementioned blueberry picking.

I had actually suspected my itchy bumps were chiggers, as I’ve been the feast of Chiggers before (55 of them to be exact, while being a camp counselor for our Church Junior High group, which to smother them and prevent them from further boring into my epidermis, I covered all of my bites with bright pink Junior High fingernail polish, thereby making myself look like a prime candidate for a girlfriend for someone in the Blue Man Group), but Ali’s sores looked COMPLETELY different.

Luckily, the doctor was an expert.

So, for the first time in my life, I was thrilled to hear the word “Chigger”.

Yes, they itch like crazy. Yes, it’s disgusting that bright red arachnids are still boring into our skin. But it’s not the Chicken Pox, so life can go on. It may be a bright pink fingernail polish covered life, but it’s our life.