I, along with my friends Ashley and Lydia, lead a LifeGroup of High School girls together. We’ve been with these girls since they were sophomores, and now they’re about to graduate. We’ve formed some tight bonds, and now they’re all moving away and leaving us to go to college.

But despite the fact that we are supposed to be mentors, we always seem to get our girls into trouble.

And then there was our latest experience.

At our last meeting, we decided to go to Aldridge Gardens, a beautiful community botanical garden. We were sitting along the lake, looking at God’s beautiful creation and talking about Godly stuff and being, in general, model citizens.

And then HE rolled up in his golf cart. A very grumpy older gentleman in a security uniform. He glared at us accusingly.

You would have thought he caught us pulling up his precious flowers or feeding the baby Geese rat poison.

He barked quite loudly in our general direction, “The gates are closed and locked! Unless you want to leave right now, you’re going to have to call the police to let you out!” Then drove off in his little electric car in a huff.

We looked at our watches.

At which point we vaguely remembered that the gardens closed at 7:00 pm.

We walked as hurriedly as we could back to the main entrance, thinking that he was going to be there waiting to let us out. After all, he did say “Unless you leave right now…”

However, before we got there, we saw him driving off in his power trip cart in the other direction, assumably looking for more derelicts.

Surely he left the gate open for us to leave…

We arrived at the wrought iron gates, and they were all quite shut. And padlocked. We wiggled them. We searched them. They were most certainly locked.

We looked around for HIM – still nowhere to be found.

So we did what any really-gotta-pee-because-we’ve-been-outside-with-no-bathrooms-for-hours and desperate-to-leave-before-getting-yelled-at-again group of girls would do: we found the lowest part of the fence and began climbing over, one at a time. 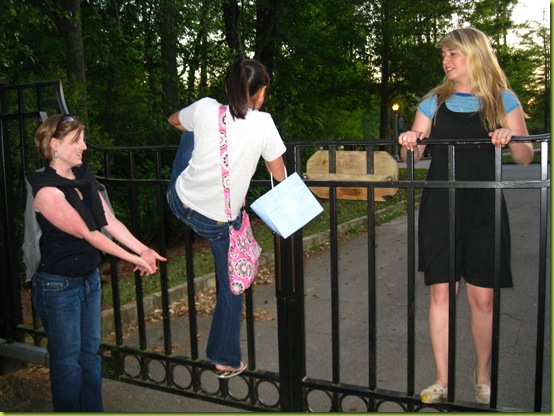 Amy made it over fairly easily despite her dress, Cara, being a bit shorter, was getting some help from Lydia, as can be seen. Then Lydia hopped over.

Next was Ashley. Ashley wins the award of the tiniest of all of us, at 4 feet 11 inches.

She tried. She pushed. She grunted. Her leg, when over the fence, couldn’t even bend, let alone help hoist her over.

Everyone was over but she and I.

Lydia yelled out to me, “Give her a boost over!”

I felt awkward. “Ashley did not give me permission to touch her butt. Unless she does, I shall NOT push her over the fence.”

Ashley stayed silent. I took her silence as a decided UNpermission to touch her butt.

After trying for a minute more, she decided that she was most definitely too short to make it over. And, at the same time, We saw Grumpy headed back towards us.

Ashley ran back to him to ask him as sweetly as possible to let us out.

She tried joking with him to lighten the mood. “They made it over the gate, but being that I’m four feet eleven, I need a bit more help.”

“They could be put in jail for climbing that gate!!”

Ashley, still trying to lighten the mood (and keep her friends out of security-guard-jail), “Well I’m glad I wasn’t able to jump the gate, then!”

He grumbled under his breath.

When they finally made it back to us, he very aggravatedly opened the gate.

We all politely and profusely thanked him. “Thank you so much, sir!!! We won’t do it again!”

We hurried to our cars before he could call the cops on our suspicious selves, but then talked for a minute more. We ARE girls, after all.

He stormed out to his truck and began circling us in the parking lot, eying us as if he were a buzzard and we were a dead gazelle looking perfectly ripe for a post-seven-o-clock snack.

And that’s how we found ourselves running as fast as we could to our cars before one of us had to call some parents to explain how we managed to get their model-citizen-high-school-daughter arrested.

Because that’s what good mentors do.

12 thoughts on “Escaping From Aldridge Prison.”