The whole Santa thing this Christmas was just plain weird for me. (Did I talk about this here? It seems like I did, but I don’t think I did. Or maybe I did.) We’ve had many discussions and debates with our friends about whether or not to do Santa Claus, and Chris and I, along with most of our friends, have always been pretty pro-Santa.

My reasoning was because a) the magical feeling of believing in Santa as a kid was just so much fun for me, and b) I didn’t really think that kids confused Santa with reality, God, etc.

However, actually carrying out the sham just felt WEIRD. Especially when my kid wasn’t even all that interested in Santa or even wanted him to come to her house.

The thing was, it really didn’t feel any different than lying to her would feel. And that was weird.

But I still never worried about her confusing the whole thing….until this week.

Ali had a Picture Bible in the backseat. She was giving a running commentary to herself about the characters in it. Then I heard this:

My breath caught in my throat. Did she really just say that??

She equates God and Santa.

Right before I was about to blow the whole thing and tell her that Santa was pretend and NOTHING like God, I looked back at the picture she was looking at, and realized that Ali wasn’t thinking nearly as deeply as I had given her credit for: 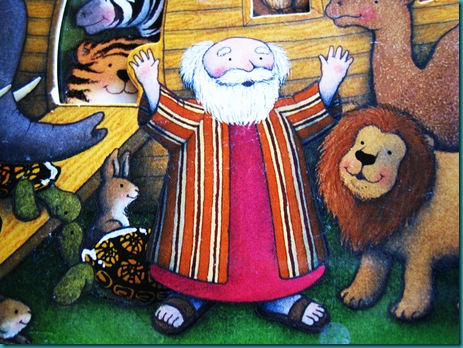 It was a man with a white beard and red and white outfit.

And, poor thing, it wasn’t even God, it was Noah.

But I still feel weird.

Did anyone else find it more awkward than they thought it would be to do the whole Santa thing?