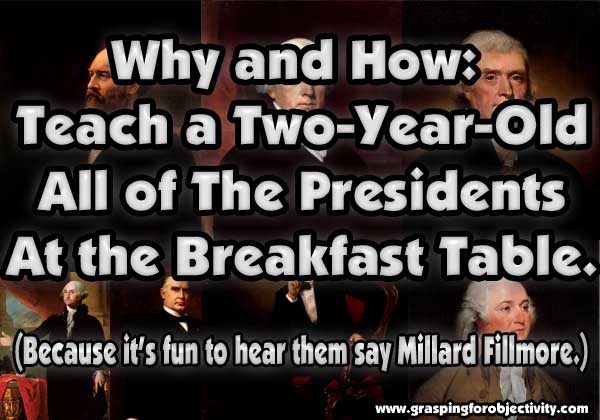 All you need to teach your two year old their presidents:

– Marshmallows, nuts, Nerds, or any other type of treat.

After we finished up our studies of the states, I wasn’t sure what to do next.I wanted Ali to learn how to write her letters, but she had no interest in that (until she freakishly signed her name last week).

I thought that countries might be the best option, but after winning a book giveaway at Mama Hen’s blog, Ali became obsessed with one of the books that she sent us about the Presidents. Then, Lianne gave Ali a Presidents Placemat

, which just intensified her love of Presidential Studies.

Rule #1 about teaching a geeky toddler: Capitalize on their obsessions.

So, we started learning the Presidents. Initially, we just read and talked about them. We just started “quizzing” on them last week, so she’s certainly no presidential expert, but I thought I’d share the beginning processes this time around …

Ali really loves these learning endeavors, and they aren’t as hard as they seem. With a little reward (aka Pistachios, Marshmallows, Gummies – whatever treat you don’t mind your kid having a few of in the name of education), “learning” has become her favorite game. I don’t know how useful recognizing who the presidents are will be in her life, but I figure if nothing else, it’s good for developing those brain synapses.

And as of the recording of the below video, we have also clarified that ALL Presidents (so far), regardless of the confusion of their picture, hairstyle or bow-ey like ties, are BOYS.

(As usual, my apologies for the video quality and my annoying cell phone that can never keep to itself when I’m recording.)