Friday night was Homecoming at our Church’s Private School, which also happens to be Chris’ Alma Mater. So we decided that Ali needed to experience “Little Football”, since she recently got her first experience of “Big Football”.

Ali was quite thrilled with the situation. Every time the fans would cheer, she would jump, wide-eyed with shock, and then start screaming and clapping. 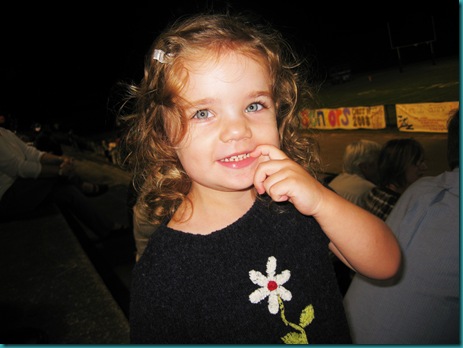 I think she liked the fact that adults were acting like toddlers. Because, after all, the excitement that “big” people show at football games is, I suppose, somewhat comparable to the excitement that a toddler feels for finding a rock, seeing a butterfly, or finding a chip shaped like Ohio (and then eating it, of course, while screaming with glee, “I’m eating Ohio!!!”).

Some good friends of ours from Church sat right in front of us, namely “Missuh Gary”, someone that Ali absolutely adores from a distance, but is usually too shy to let him too close.

However, there was something about the wide open space and the fresh fall air that convinced Ali to lower her inhibitions, and within a few minutes’ time, she had moved down a row and became Missuh Gary’s date for the rest of the game: 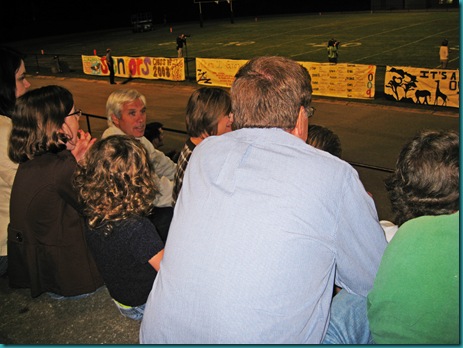 (Miss Janey, Missuh Gary’s REAL date/wife, had made the poor decision to sit on the row below him, leaving a very open invitation for another woman to come in and swipe her date right out from above her.)

(She also happens to be Ali’s Sunday School teacher. Let’s hope she doesn’t take out her jealousy and make Ali be Judas or the Pigs possessed with demons or something equally awful when they’re acting out the bible story.)

Chris and I, of course, took full advantage of our childless situation and had a date of our own while Ali was fully entertained basking in the presence of the great Missuh Gary and mimicking the cheerleaders and the eagle: 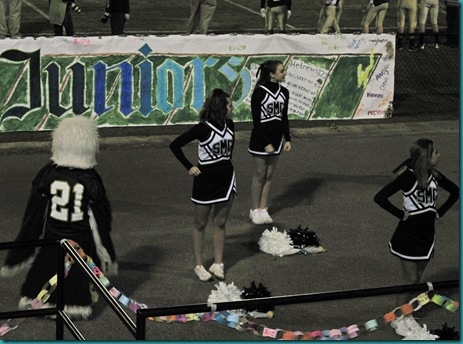 I personally was enjoying the mental comparisons of the cheerleaders in Chris’ yearbooks from the 80’s and 90’s, with their knee length Super-Pleated skorts, and wishing that the alumni cheerleaders would attend homecoming in their era outfits.

Then, to those around us, I asked (very jokingly but maybe not-sounding-so-jokingly), “Why are the cheerleading uniforms BLACK?? Shouldn’t they be Green and yellow? What has happened to our SCHOOL??”

However, as my luck would have it, the cheerleading coach (whom I’ve never met before) was sitting DIRECTLY across the aisle from me, and was quick to jump to the defense of the uniforms that she lovingly and dedicatedly chose for the squad.

Mental note: No live, verbal blogging should take place when in public for fear of it resulting in enjoying the cuisine of one’s foot.