Yesterday, Ali and I attended/hosted our second Alabama Blogger meet-up: 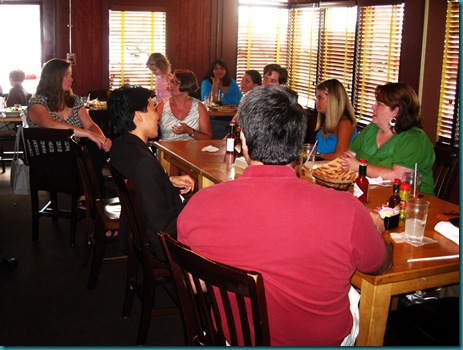 We had an awesome time visiting with everyone, and Ali had a BLAST playing with and talking to everyone (especially Gina, Lianne, Amy, and Valerie). In fact, she was perfectly happy, until we left: 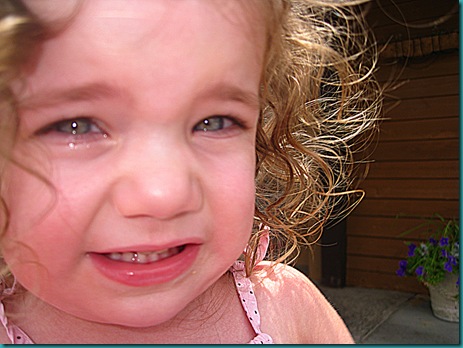 No, it wasn’t because the meet-up was over. . . it was because her precious, hand-picked, beloved, purple balloon (that she had received excitedly and lovingly mere seconds before) ended up like this: 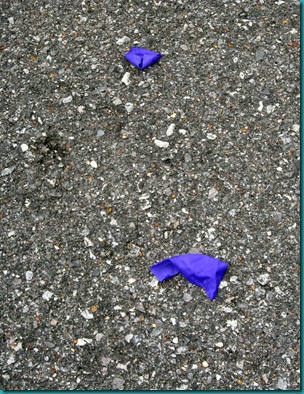 Yes, it was her first balloon-popping experience.

I’m pretty sure that 36% of her cry was from being scared out of her wits, 48% was from confusion (she kept saying over and over, “Where did it GO??? Where did the purple balloon GO???”, despite my efforts to show her it’s remains), and 16% was over the loss of her balloon.

Knowing how she tends to deeply root aversions to things that scare her (NOT because I’m a doting Mom – I swear!!), I encouraged her to go back inside and get another balloon. I was actually surprised that she WANTED to do that, and so we left with this, much-more-secondary-in-choice-but-appeasing-nonetheless yellow balloon: 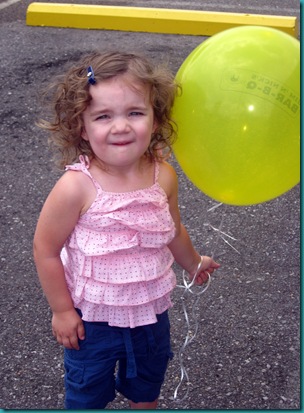 When Daddy got home, we went to the park for a bit of playtime. We walked up and immediately knew that it was going to be an interesting visit when we saw this: 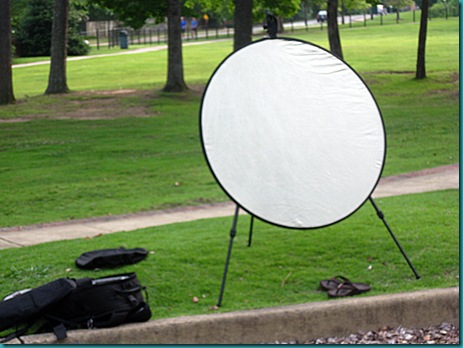 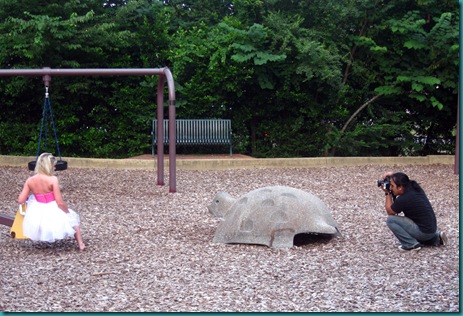 Yes. Some girl in a very 80’s prom-dress-esque get-up was out, with a professional-esque photographer, shooting model shots on the PLAYGROUND.

(You see, today was America’s Next Top Model auditions here in Birmingham, and apparently she didn’t plan ahead too well, so was preparing her last-minute portfolio.)

And – whose bright idea was it to do sexy modeling shots on a PLAYGROUND? It was a bit too Michael-Jackson-freaky for me.

(I know, I know, now that he’s dead, it’s off limits to make fun of him. But I’m having trouble grasping the reasoning behind that – how exactly someone goes from being the butt of every joke to a hero simply by dying – seems a bit odd. So leave nasty comments if you must, but if you could, just pretend you read that in the context of a month ago and you won’t even bat an eyelash.)

But I must say that it was quite amusing to watch her precariously pose for very inappropriate playground poses: 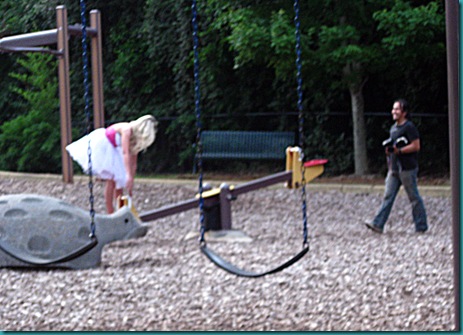 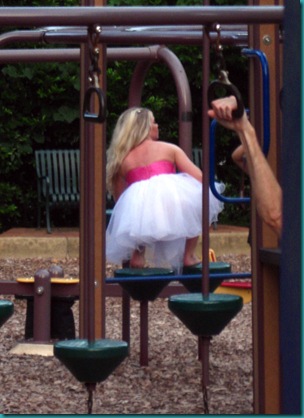 (Notice the random Dad’s arm in that one – he was trying very hard to look like he was playing with his kids and completely oblivious to the oddity occurring mere feet from him:)

(I really hope that his skinny, bony arm shows up in her “portfolio”.)

She even sat with the same, um, “class and poise”, when reviewing her photos: 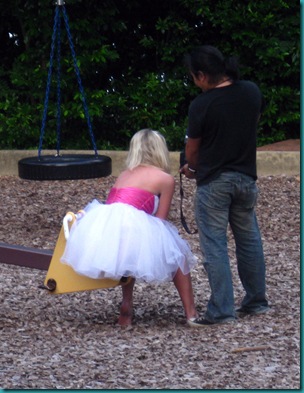 Yes, I’m sure she’ll go far on America’s Next Top Model. Except that she didn’t get the memo that you must be completely emaciated to even audition. I mean look: you could actually see CALF CURVATURE as she walked away!!! 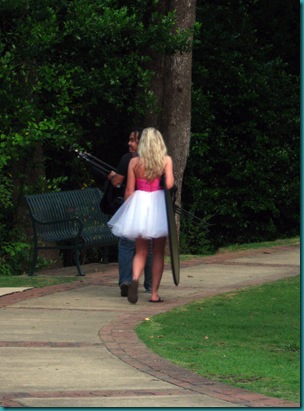 Anyway, Ali was inspired by pink-prom-dress’ amazing, err…talent for posing, so did a bit of modeling herself: 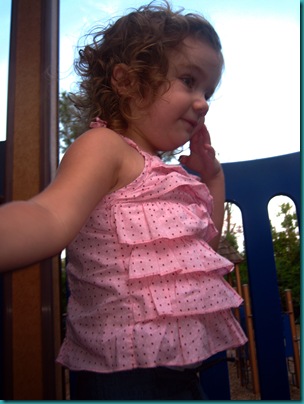 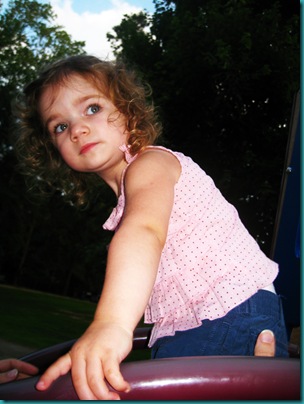 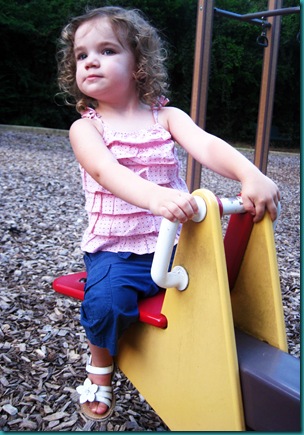 However, her modeling days quickly ended when she broke the #1 rule of being a supermodel 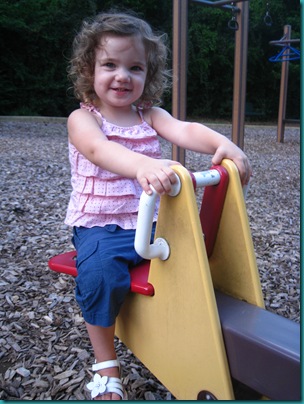 You must look COMPLETELY and UTTERLY miserable if you want to be a supermodel.

Fast forward to today: Even though Mom doesn’t get off of her crutches/walker until Monday, she wanted Ali to come spend the day and night.

We very fervently tried to get her to consider her needs (or maybe we just said a half-hearted “are you SURE?”), but she assured us that she missed Ali very much, so Chris and I very happily had an all day date.

Naturally, of course, we had to make a stop in at the mall to check out the auditions: 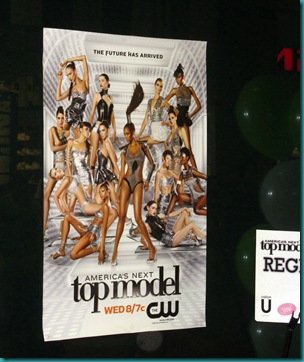 (You know, to see if we could spot our new park friend.)

There was QUITE the collection of Freakishly Tall-and-Emaciated-Ladies: 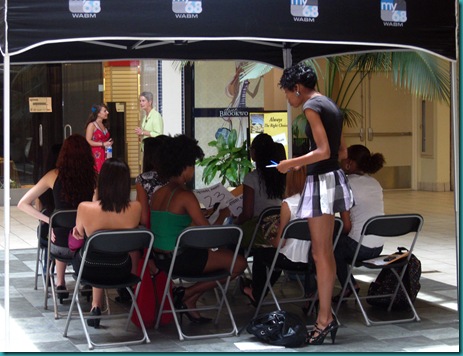 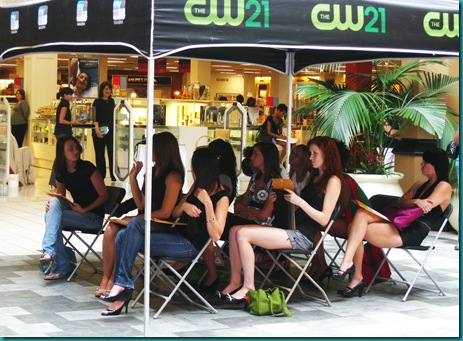 And a few Not-Quite-as-Tall-or-Emaciated but QUITE jealous passersby: 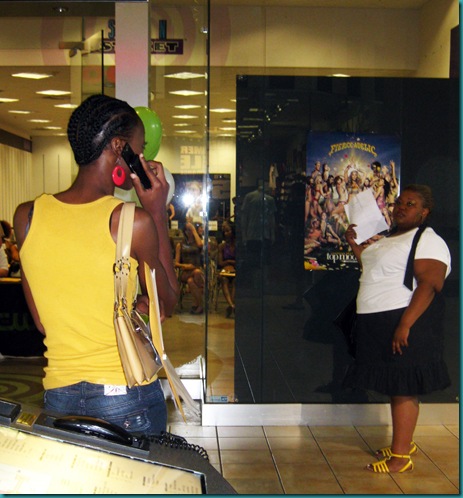 Yeah. That glare could have easily knocked over that 75 pound body had the information kiosk not been there to hold her up.

Notice the model hopeful was on the phone. Besides the audition tent, there were FTaEL’s ALL over the mall – and ALL on the phone. Most were crying. Most looked upset. Most were seeking consolation. We saw only one FTaEL was happily talking on the phone – and I assure you that it wasn’t our friend from the park.

We filled the day with further fun – a brisk walk/jog to work up our appetites, an aMAZing dinner at The Bright Star, a movie, and then topped off to perfection with Dessert from Chez Lu Lu.

We’re all about making our dates count, you know. If we’re going to allow a crip watch our kid, we better enjoy ourselves!

Anyway, since we were close to some of the awesome overlooks of the city, Chris drove us up to a super-swanky road in Mountain Brook to enjoy this view: 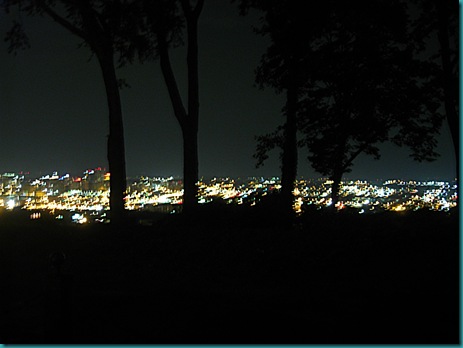 The street was crowded with cars in front of the multi-million dollar mansions.

Then we saw the guests leaving. . . in very cheesy, first-grade-craft-project-looking Cowboys and Indians Costumes.

. . . and. . . it didn’t look like there were any Indian PRINCESSES invited, if you catch my drift.

Swankiness these days. It’s just not what it used to be.