It all started a last month with the Black Beans. They SHOULDN’T have gone bad that quickly.

Then, Ali’s milk started going bad too quickly. One jug went bad TEN DAYS before the date on the container.

Then, last week, I was plagued by yet another smell. I was starting to feel like no matter what I did, every time I turned around, the fridge stank with another awful rotten smell.

That one ended up being rice, again going bad way too quickly.

The very next day the stench was back. This time, it was a chicken dish.

The thing is, I used to be able to let things turn green and fuzzy in my fridge with the best of them. They never stank, except for the occasional shrimp dish or something. My rule of thumb was to clean the fridge out when there were more than three dishes growing fuzz.

Oh, don’t judge me. You know that you do it too.

But here lately, not only have things been going bad WAY too quickly, they are putting off an unbelievably foul odor. And there’s a common thread to the scent, whether it’s the milk or the beans or the rice or the chicken.

AND, to top things off, I’ve been keeping the fridge inventory fresher than ever, due to this smell. But it STILL keeps attacking me.

So my theory is: We have some strain of mold or bacteria that’s made it’s way into our fridge that is attacking our food. Maybe it was those extraordinarily foul black beans that started it all. Or maybe it’s something else.

(At this point, Alice and Chase, our dinner guests Tuesday night, are starting to feel their stomachs turn a bit. Don’t worry – I double ziploc sealed that food before it was prepared to protect it from the. . . err. . .whatever-it-is.)

So, something is floating around in my fridge. I’m sure of it.

I wiped the whole fridge down with antibacterial soap at the beginning of the week and turned down the temperature of the fridge. I’m hoping that helps. So far, so good.

So if this doesn’t work, do you happen have the number for a Mold and Bacterial Exorcist? 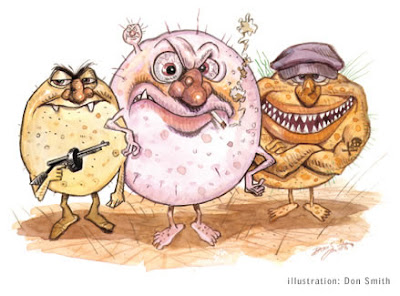 Because these guys are rotten.

14 thoughts on “Do You Know of Any Good Bacterial Exorcists?”