In fact, I very nearly hate them.

However, Chris insists that we watch “Christmas Vacation” once every Christmas. I usually try to get out of it as best as I can.

The plotline is always the same: Clark (Dad) has these grand ideas of family togetherness and adventure. He makes all of these plans and drags his somewhat lackluster family along with him. Then, of course, everything goes wrong in a train-wreck-esque fashion (I hate train wreck movies), Clark almost loses his mind, and then all comes back together in the end.

Anyway, this idea of having grand plans for family excitement, followed by it not exactly being all that you planned for it to be, seems to happen a lot when you have a toddler.

My big Clark Griswold moment was definitely “A Day With Thomas”. I mean, it made total sense – take a toddler to a whole day about her favorite character in the whole world and it will be a day full of wonder and thrills, right?

But that’s part of the game of toddlerhood, and luckily we always survive and manage to have a sense of humor about it all.

At any rate, Chris got to have a Clark Griswold moment today.

We’re down at Orange Beach Kitty and Leo’s house, and Chris had decided that this was the trip to introduce Ali to the Jet Ski, or as we coined it for her understanding, the “little boat”.

I, on the other hand, was less than excited about his grand plans (true to the Clark Griswold plot line). Something about how fast all of the yachts go in the bay scares me, even though I’m usually the daring one.

But I trusted Chris and went along with the plan, secretly comforted by the fact that Ali most likely wouldn’t allow it anyway.

I mean – I know my daughter, and she’s not exactly the thrill-seeker type. Remember the slide from earlier this week?

Well, it was a perfect day for getting in the water – the humidity was so thick it stuck to your lungs: 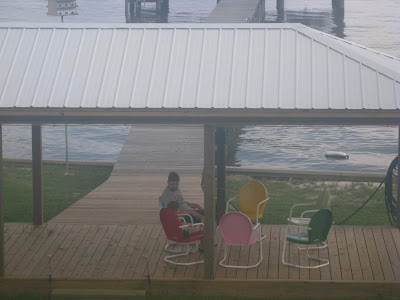 But despite the heat, Ali was quite content to sit in her chair of choice and contemplate the world going by: 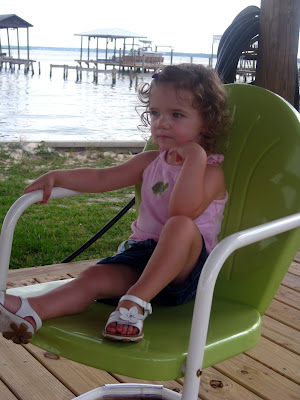 Then, being the evil parents that we are, we “stretched” her adventurous spirit and (gasp) put her in the hammock: 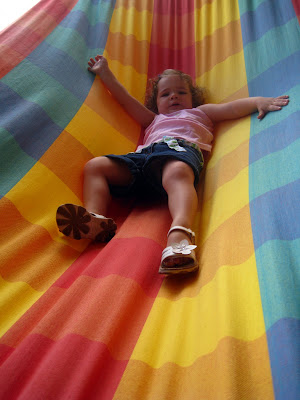 (I told you she’s not a thrill seeker.) 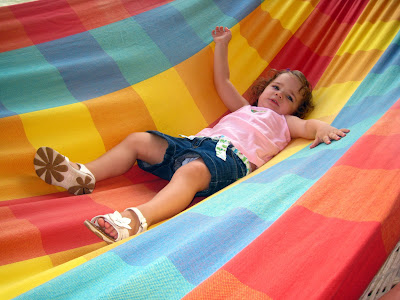 Then it was time to really stretch her. However, being the fashionista she is, she was more than willing to put on her cool life jacket: 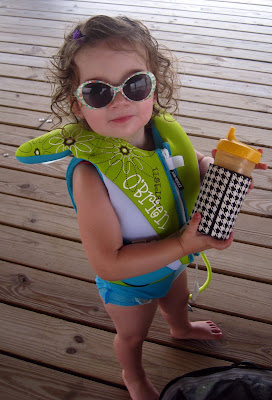 (she stole the houndstooth coozie from Kitty, again all about the fashion.)

Then it was time. Chris literally had to DRAG her onto the Jet Ski: 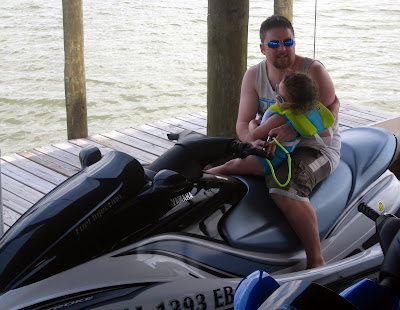 And then as we were lowering them down into the bay, she was crying and screaming the whole time. . .

We told her that she had to at least try it, then she could get off.

After getting strapped to Daddy much to her chagrin, 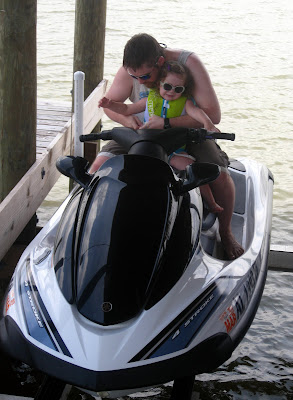 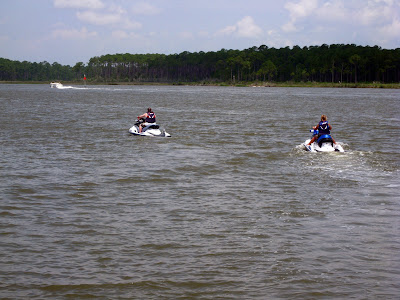 About 10 minutes later, I saw them headed back. 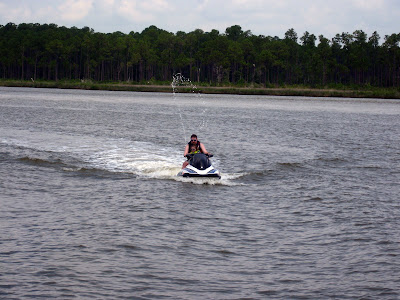 I figured since they had been gone so long, she must have warmed to the idea, but her seeming motions of trying to get down and Daddy’s less than excited look told me otherwise. 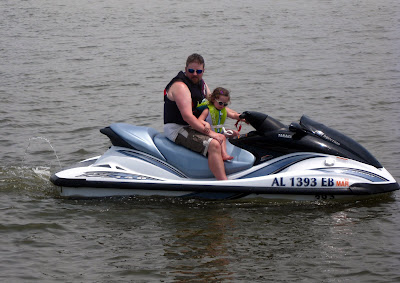 Although she DID quit panicking after they got going, and she would even actually talk to Chris about things they saw, everything was preceded and followed by soft moans.

She was quite happy to join me back on the dock, even though it meant getting in that “scary” hammock.

She was much happier when we let her find her way back to her chair of choice and contemplate the world going by. 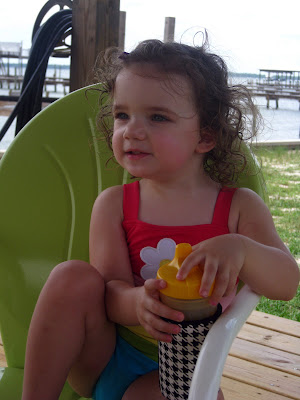 11 thoughts on “Everyone Has Their Clark Griswold Moment.”