Way back in 2004, we went on the annual camping trip with our Church’s homeschool group. I’ve been going on this camping trip since I was 5 years old, albeit a couple different iterations of homeschool groups. (You can see pictures from last year’s here, if you’re wanting to chase that rabbit trail.)

Anyway, my Dad was going back and forth to work each day, and he kept seeing a TINY little kitten near the campsite on the side of the road. He finally decided that if he saw it again, he would stop and pick it up (despite his general gruffness about cats – his heart couldn’t help but come out).

The next time he passed by, sure enough, the little kitten was still there, so he brought it to the campsite. There were a couple of Veteranarians camping with us, and so they discovered that it was a female kitten, and that she had about every problem a kitten could have – worms, fleas, a bad eye infection, a cold, etc.

But she was an adorable kitten, despite her overly-grungy outer layer. She hung around our campsite all weekend, allowing all of the children to hold her, feed her, pet her, whatever.

As the trip was winding down, we all started discussing who would take this poor kitten home. Out of the scores of homeschool families, all had a reason why they couldn’t.

After much discussion, I convinced Chris that we needed to take this pitiful kitten. Me and my friend Barkley were actually headed from camping to her place in Charleston, SC for a few days, so the plan was that Barkley and I could take her to Charleston, clean her up, and then she would fly home with me.

So the as yet nameless kitten rode all the way from North Alabama to Charleston underneath Barkley’s passenger seat, never making a peep.

We got her to Barkley’s and began the arduous undertaking of cleaning her. 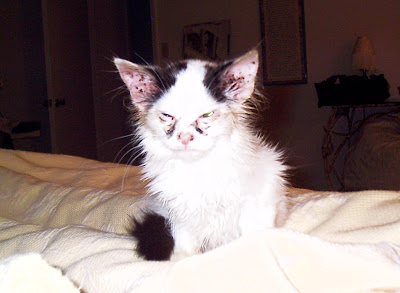 She was NASTY. Downright disgusting. 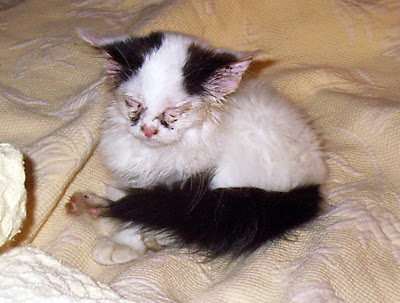 We actually attempted to give her a bath. If you’ve ever bathed a cat, you’ll know that it is not easy nor glamorous ANYONE involved, including said cat: 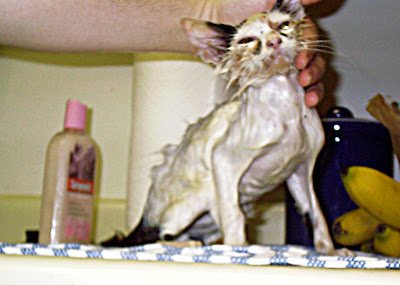 I’m pretty sure that she left at least 50,492 fleas in poor Barkley’s apartment after that weekend. Along with a tee-tee puddle or two. Although I did manage to litter train her in one try while still at Barkley’s – she wandered off to a corner and started peeing, and I ran over, picked her up, held her upside down, and set her in the litter box. She finished her pee there and was trained from then on.

She flew home with me – quite the crowd draw at the airport – and we christened her “Oreo”. I took her to the vet, got her on a boatload of medicines and fully vaccinated, and she became an affectionate, sweet, cuddly kitten: 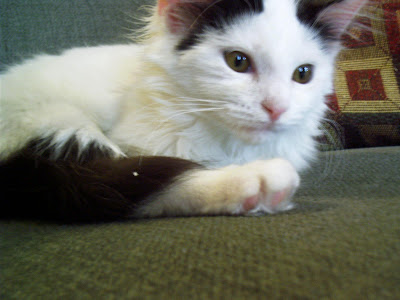 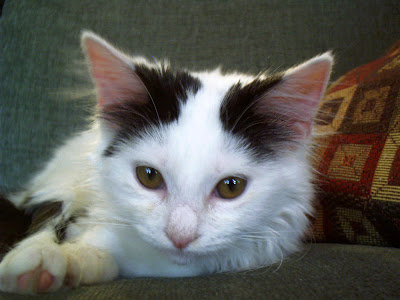 Plus, she kind of glowed once she was clean. 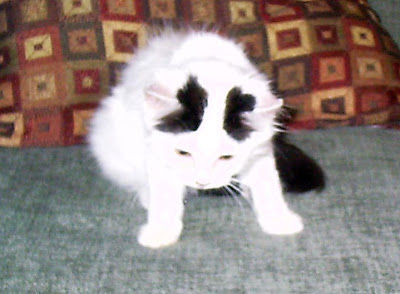 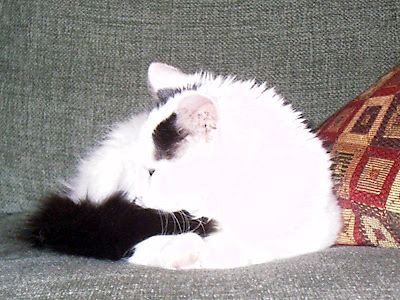 A couple of months later, I started having foot problems.

Oddly unusual and interesting foot problems that no one could figure out what was wrong, but that’s another post for another day.

Ultimately, five months after the problems started and after seeing multiple doctors who all said “Wow. I have NO IDEA what is causing that! But it’s cool.”, a surgeon was able to see the problem and did this to me: (umm, sorry for the un-warned gore.)

It would have been nice to know BEFOREHAND, but after the surgery, he told me that he had never seen my condition before, and that it was so rare he’d probably never see it again.

I had to be on crutches and in a cast for six weeks.

Well, something about the crutches bothered Oreo.

And so, to air her grievances with me and my new noisy limbs, she started peeing on our bed.

ESPECIALLY if I was in the bed, alone (because she had quite the crush on Chris and had no grievances towards him. In fact, if I had to really psychoanalyze her, I would say that she was upset that I required so much care from him, so was displaying her jealous inner cat-fighting-diva).

It was horrible. Here I am on crutches and an invalid, trying to clean up cat pee – on the bed of all places.

And if you’ve ever experienced cat pee, it is a horrible substance.

We tried everything to make her quit, but just when we thought it had gotten better, she’d do it again.

So we finally had to resort to putting a waterproof liner under our sheets. Let me tell you – if you think you sweat in your sleep, you don’t KNOW what sweating in your sleep is until you’re sleeping on plastic. It was awful.

However, once I got off of crutches, she let go of her grudge and quit peeing on the bed, and we slowly started trusting her again.

You know, that whole “he’d never done that surgery before” thing.

He had wired a bone in place, but it didn’t stay there. So, 9 months later, it was determined that I needed a SECOND surgery, this time to remove the offending bone all together (which, as I have mentioned before, Chris still has in a surgical jar).

Of course, that meant 4 more weeks on crutches.

Four weeks ended, I put away the crutches, and once again, she cooled down, and we slowly started to trust her again.

A year later, we were afraid that she would freak out all over again when we brought home a new baby, but she loved Ali from her first day home: 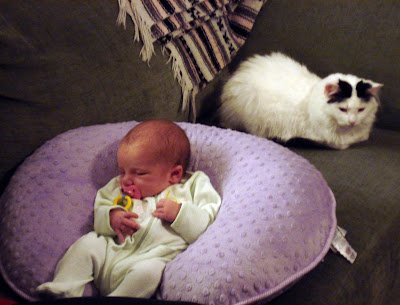 For a while we had “Oreo and Ali time” every morning in the kitchen floor: 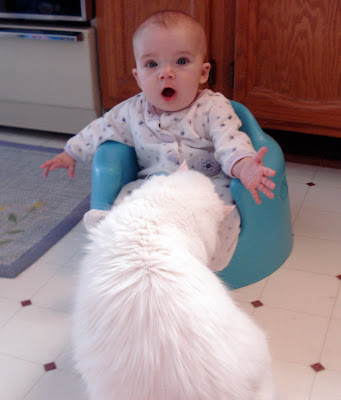 And now that Ali is older, she is still wonderful with Ali. She checks on her when she’s sick: 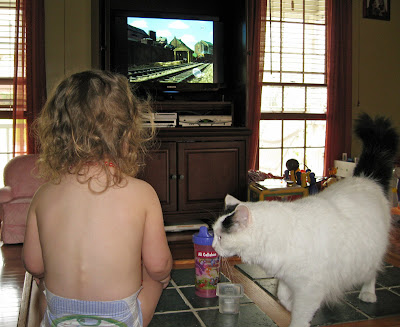 Eats her Licks her: 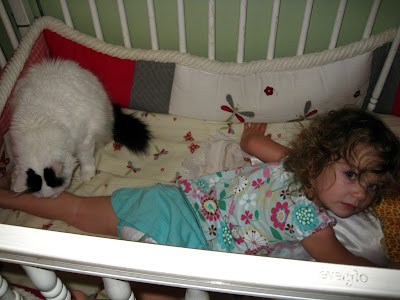 And Ali thinks she’s number one. 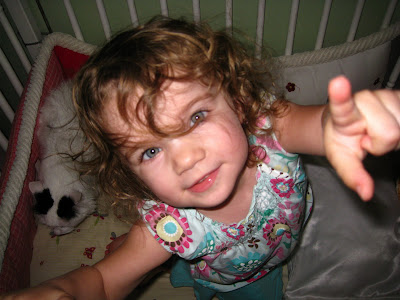 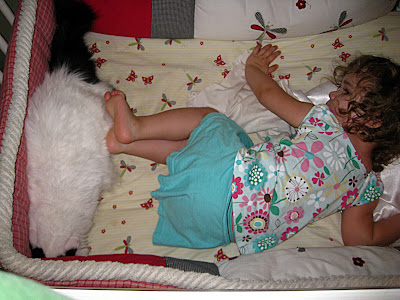 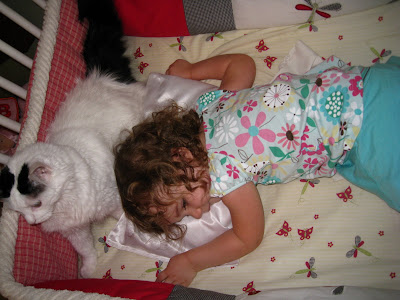 So, here’s the thing: it was the crutches. And guess who’s borrowing my crutches right now?

And THIS is why you can’t come over, Mom.

*Don’t leave me nasty comments. Of course my Mom can come over. She just has to hop around on one leg and leave The Dreaded Crutches of Kitty Dementia on the porch.