I’m taking a vacation from all of my weekly columns – Early Monday Mornings and Conquer the Caption. They should all be back next week, assuming I can shake the vacation mindset by then.

Since Ali has been learning her map skills, she has been more excited about this trip than any trip ever before. Being able to visualize that we are going to a different state has really solidified in her mind the idea of vacation, which makes it a lot more fun for all of us. She’s been talking for days about

This morning, she grabbed the one bag that she could carry, put on her sunglasses, and announced, “Let’s go to TENNESSEE!!!!” 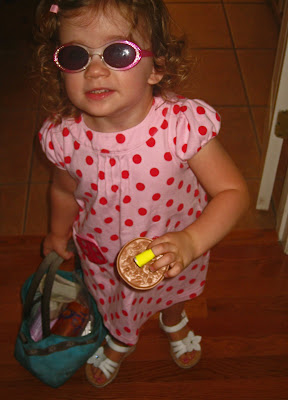 Of course, there were a whole lot more bags to carry. Being that we’re a very bad overpacking family AND had to stop at the grocery store once we got near the house, this is what our car looked like: 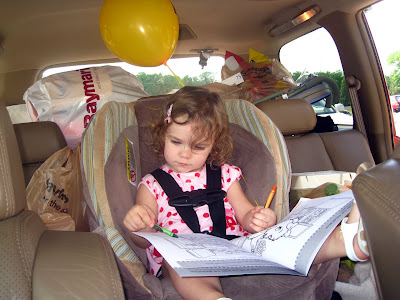 (The Tennessee Publix’s are much more kid friendly than our local one. They gave Ali a coloring book AND crayons AND a balloon! . . . because we had SO much room in the car for all of her loot.)

After jumping and skipping and squealing around the house, we put her down for her nap, with the promise that when she woke up, EVERYBODEEEE would have arrived.

Sure enough, she woke up and said, “EVERYBODEEEE is here!!!”.

Ali and I headed down to the Lake, and along the way we found one of my favorite childhood pasttimes: 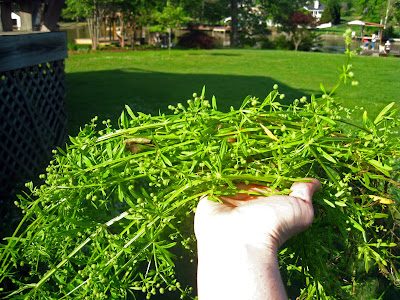 I told Ali we were going to do a trick with the Sticky Grass. 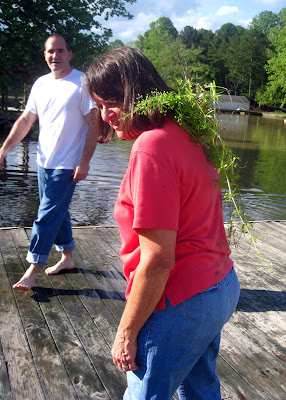 And we tricked JC: 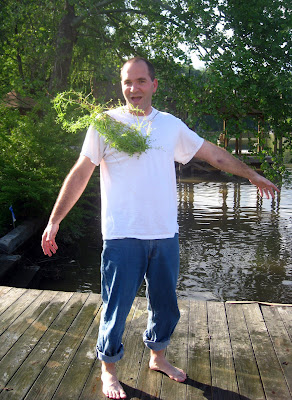 Sticky Grass was quite a hit. I’m pretty sure that Ali will follow in my prankster footsteps just fine.

Of course, Sticky Grass is just a gateway prank.

Next trip: Cherry Kool-Aid in the shower heads.

We watched the dogs do their favorite thing in the world – chase tennis balls into the water.

Shadow has the most joyous dog-jump-into-water that you’ve ever seen: 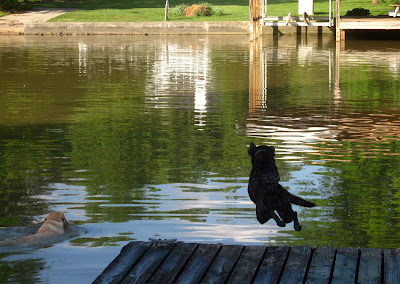 Hence, Shadow ALWAYS gets the ball. . . 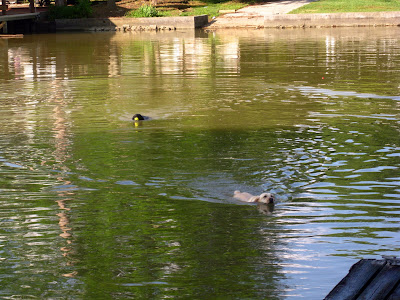 . . . and Layla just gives up and turns around before she even gets to it.

There was plenty of time for reflection. . . 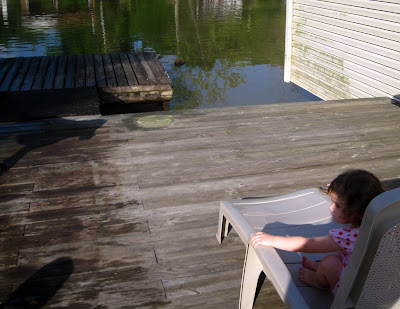 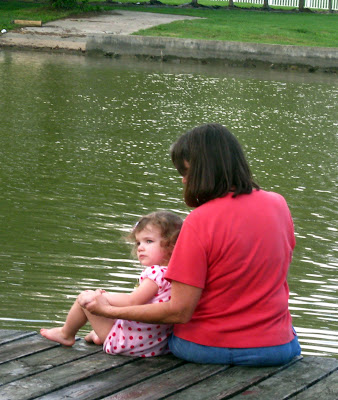 And teaching Ali the fine art of flower necklace creation. 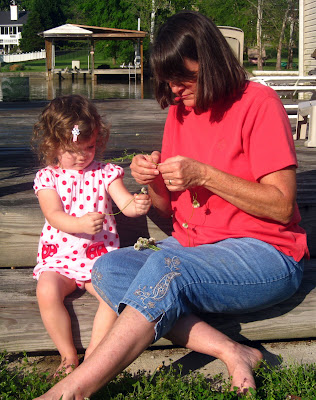 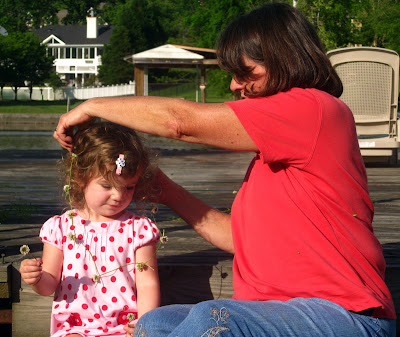 She was so proud. 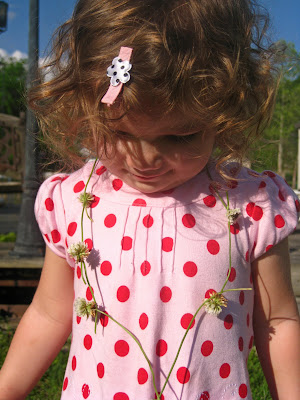 And of course, when a Gramamma learns how happy something makes a toddler, she does it again. Adding a flower bracelet and pocket highlights. . . 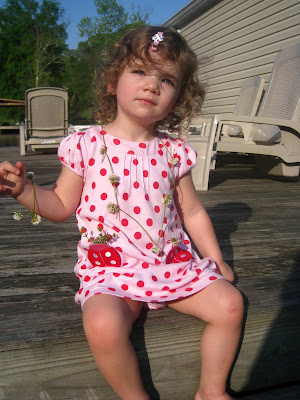 And even a flower anklet. 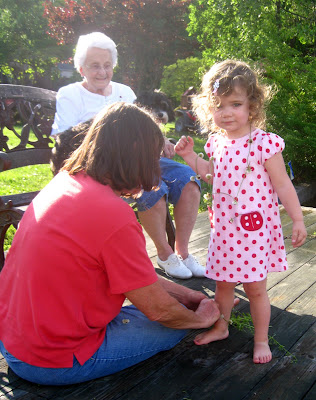 As a side note, have you EVER seen a head of hair quite as incandescent as Mammaw’s?

It’s amazing. I am pretty sure that she could illuminate the whole house if the power went out. 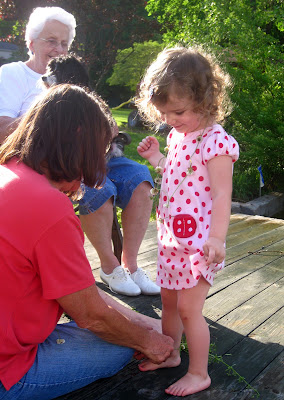 Eli was having a blast too: 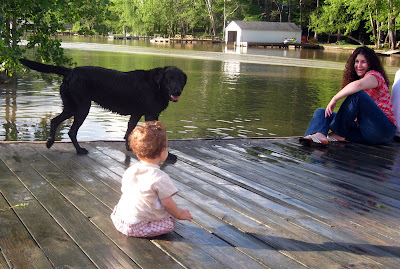 Everyone’s goal this weekend is to convince him to start walking. Which would be very fitting since it was Mother’s Day weekend last year when my Dad infamously told Ali that she needed to start walking, and she did, albeit angry about having to do it.

Ali also enjoyed splashing in the water, but due to her short-leggedness, she had to be hung to be able to do so: 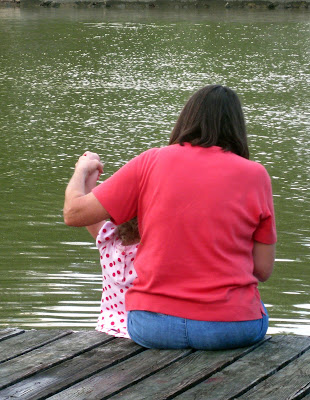 At dinner, we discussed when we were finally going to go on the Epic Family Vacation: to Greece. We decided that we would need to save up for 10 years, and that way the kiddos wouldn’t be nearly as miserable on a 12+ hour plane ride.

Then, in perfect comedic timing, Mammaw said, “I’ll just smile down at y’all from heaven.”

We now have all of the kids in bed, and are sitting around playing a quietly competitive game of Blokus: 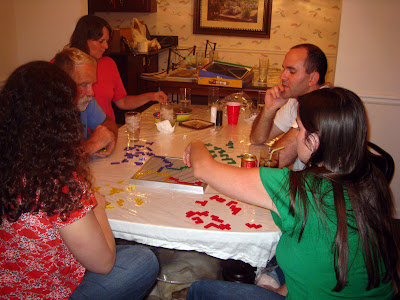 (Mom strategically sat next to the M&M’s. Every picture had her putting them into her mouth or them bulging out of her mouth. Or both. Now they seem to be all gone. Hm.) 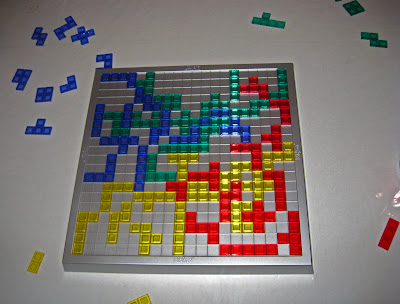 Although it is quite fun, I’ll definitely be lobbying for spoons tomorrow night.

After all, we need some family drama.