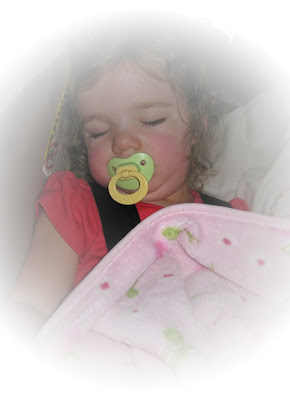 . . .Yes, I actually just quoted Shakespeare. It’s okay, you don’t have to clap.

My child is two years and two months old.

She still sleeps with a paci. She ONLY gets it for sleep – and has since 9 months old. However, I’ve been feeling guilty about her still having it at all for a while, and have been prepping myself and especially my sensitive and high-on-mercy hubby to take it away from her.

I planned to do it on a Monday, to maximize time to get used to it before going to sleep on a Thursday away from home at small group, and the rest of the out-of-routine weekend.

So 4 Mondays ago, I brought it up, but hubby told me it was too sudden. That I needed to take away her second paci first (you know, the one she holds in her hand). I submitted, and she didn’t mind.

3 Mondays ago, it was still too sudden.

2 Mondays ago, hubby suggested I try it at naptime first. Luckily, enough people (2) had told me that wasn’t a good idea, so I was able to tell him “everyone says to try it at bedtime first”. He accepted, but said not this week.

I gave him notice this Sunday night. He acknowledged that he was given notice.

I almost forgot last night but remembered right before I put her to bed, but conveniently after hubby left the room. I told her, “Do you want to be a big girl tonight?”

“Big girls sleep with no pacis!!”

She didn’t object. I put her in her bed, and she started feeling around. “I want a paci!!”.

“But you’re a big girl and big girls sleep without pacis.”

She laid back down but then lifted her head to watch me leave the room, which she doesn’t usually do.

Went to sleep happy, with no problem.

Or at least she did.

I, on the other hand, had second thoughts.

A couple hours after bedtime, I started missing the paci.

I missed the cuteness, the ability to quickly bring her comfort, the availability to give her a paci on a car trip and her to know immediately that it’s time to go nite-nite in the car, our conversations about paci, the way she removed her paci every night before giving me a kiss, I missed it all.

Why am I taking away her paci again? Because it was all I could do to keep from running into her room, waking her up, and begging her to take me the paci back.

7 thoughts on “Our doubts are traitors and make us lose the good we oft might win. . .”