Ali is going to be in her first wedding in May, where she will be Gina’s flower girl.

Before she was engaged, I had told Gina that anyone was crazy who wanted a two-year-old flower girl – that you have NO control over what a toddler will do or not do in a wedding, and it was way to stressful to attempt.

But I, being a good friend, acquiesced, but only after making Gina sign a 687 page disclaimer and complete release of liability if my toddler were to ruin her wedding in any way.

And I have to admit, it really is a fun and exciting experience.

And plus, it guarantees to provide a few good blog posts.

So today was the day to go try on flower girl dresses. I’ve been hyping it up to Ali for a week, telling her how fun it would be to try on pretty pretty princess dresses. But, accessory queen though she may be, she’s not really interested in dressing up yet, so she’s been somewhat indifferent at the idea.

This morning at breakfast, Chris asked her excitedly, “Are you going to try on pretty pretty princess dresses this morning?”

But you never know what will motivate a two year old. We drove up to the store, and she started squealing, “Store with a little heart on it!!” 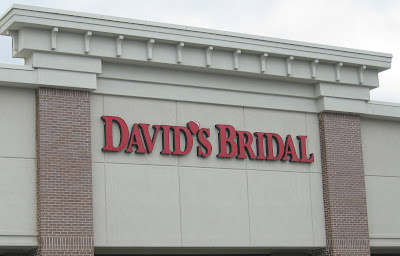 And from then on, she was elated that she was going to get to go into the store with a heart as an apostrophe.

Then, once we got inside and she saw the mirrors and pedestals and pretty dresses, well, she was sold. 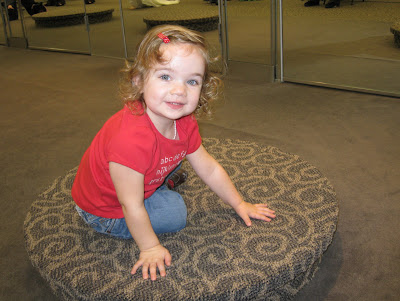 THEN we went to the flower girl section, and she was too thrilled to find “HATS!!!”. 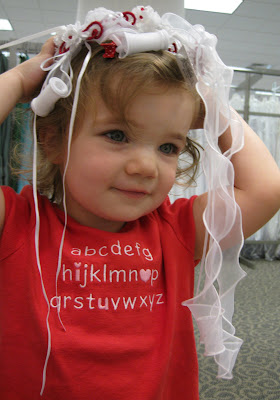 One wasn’t enough. She had at least four shoved on her head. 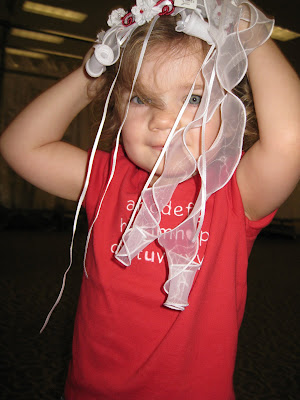 But anytime that she saw a bride come out, she stopped everything in awe of their pretty pretty Princess dresses. 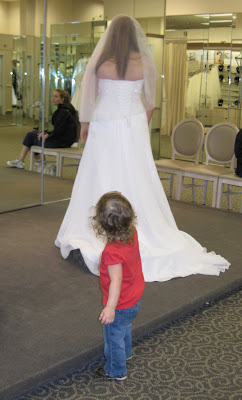 So we gathered up dresses and put the first one on. She was speechless, as was I. 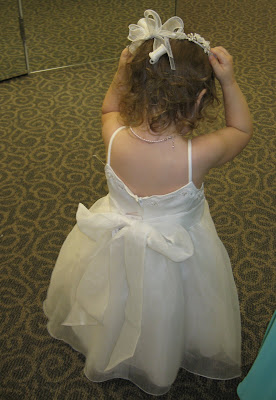 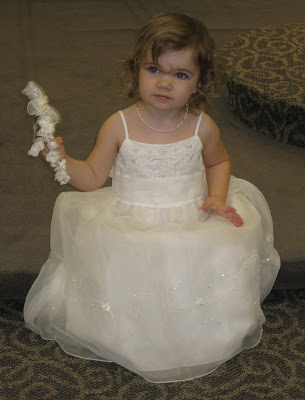 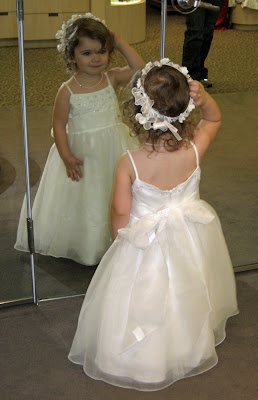 She daintily walked around like a true princess, holding her “hat” on very voraciously. 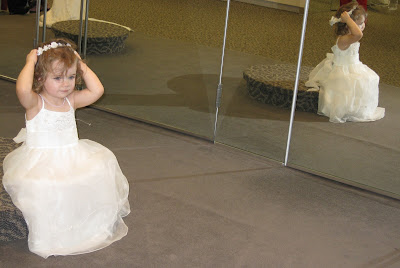 After peering at herself for quite some time, she was thrilled and told the consultant, “Ali is BEAUTIFUL!!” 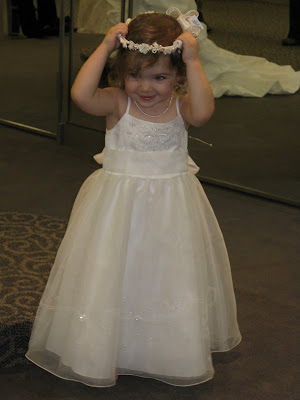 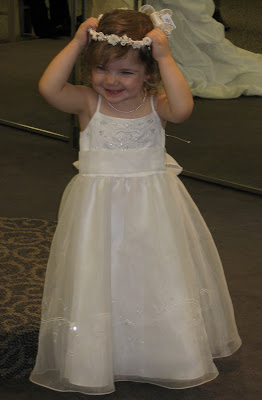 Then we tried on Dress #2, and it was the definite and unanimous choice. Instant Magic: 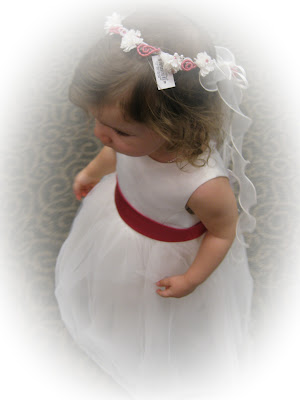 The Bride was happy, 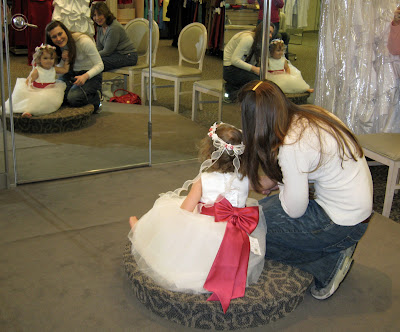 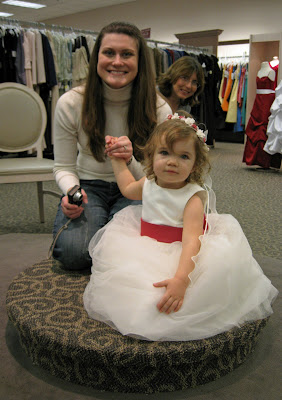 and all four Ali’s were happy. 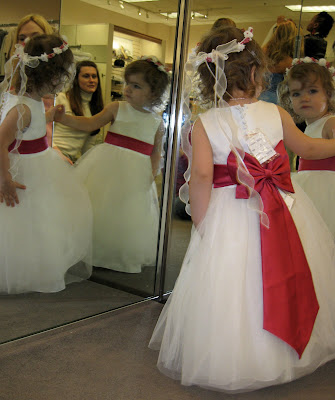 Although she was insistent on wearing her hat backwards, 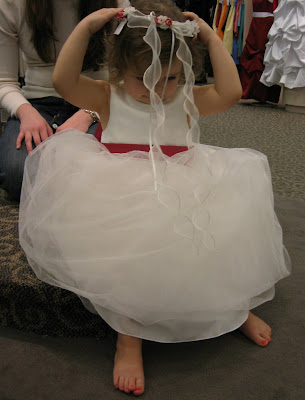 Even though she kept having to pull it’s “bangs” back. 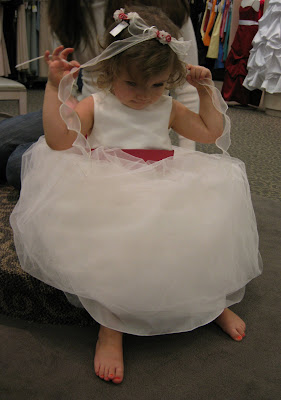 We tried on Dress #3 to just make sure that we were ready to “Say Yes to the Dress”. 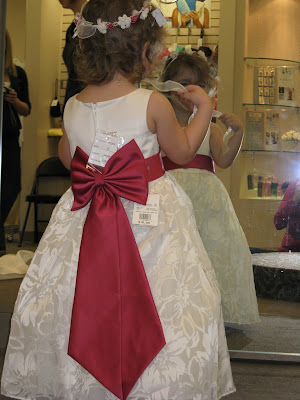 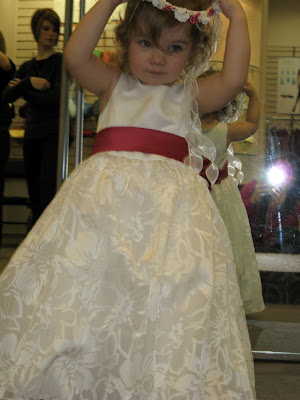 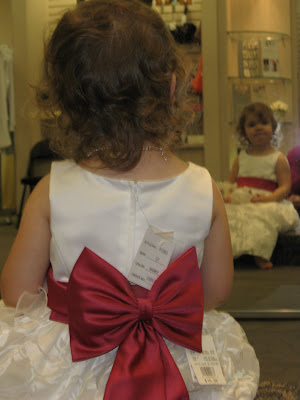 But even though she was completely enamored with her own beauty, she still paused to watch any new brides. 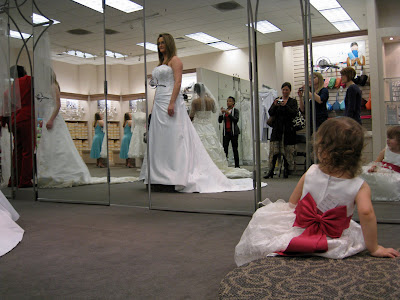 We had a perfectly dreamy and romantic girl time (on Valentines, no less!), and Ali definitely enjoyed being the pretty pretty princess. 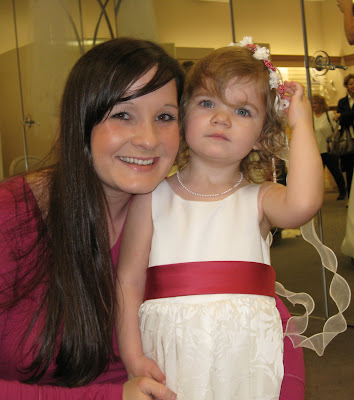 While we were driving away, I listened to her repeating to herself over and over, “Ali was beautiful in pretty pretty dress. Daddy will say Ali is beautiful.”

15 thoughts on “Say Yes to the Dress”