I had an epiphany during American Idol last night.

It’s probably something that everyone else in the world already knows, but I can be a bit slow with my deep thoughts sometimes.

However, at the risk of you giving me a big fat “DUH” in the comments, I thought I’d share.

I was thinking about the fact that they were doing the Billboard top 100 songs from all time, and I found myself hoping that someone would do one of the awesome songs that I loved from the 90’s (which, by the way, Danny made me so happy by just doing so).

I mean, they were just so emotional and intense.

Then I thought, wait a minute. What makes the 90’s music more engaging than any other time’s music? I mean, come on – it wasn’t like that was necessarily a period of musical genius..

Then I realized what it is.

As a general rule, there is no greater time of intensity of emotions and wallowing in the angst of those emotions than the teenage years. Hopefully, anyway – most of us mature out of that by the time we get to our 20’s.

Except Tatiana Del Toro, of course, but we’re not talking about the contestants yet.

Anyway, my point is that I now understand why my parents get all sentimental when they hear music from the 60’s that I think is pretty silly, why my Grandmother still had 8-tracks of music from the 40’s that really was silly (I mean, who ever heard of a song about a purple people eater that was written for ADULTS?!), and why I think that the 90’s music is the most gripping music ever written.

We bond with music the most when we are the most emotional and needy for something to express those emotions better than we can, and music is perfect for that. We use music as teenagers to medicate our emotional ups and downs. Music makes us feel like someone else just might understand the depths of emotions that we are experiencing.

I mean, have you ever met a teenager that didn’t think that their own emotional burden was unique to the world? That they are the only ones in the world that have ever or will ever feel exactly like that? I certainly felt that way as a teenager.

You know, when they feel like a purple people eater.

Or feel like they are riding on a yellow submarine.

Or, to pick on my own generation, when they just feel like their life is full of millions of peaches, peaches for me.

Which is why music is so important to teenagers (I’ve been wondering why I don’t care about music nearly as much as I used to), and why everyone thinks that the best period of music ever was whatever was out when they were teenagers.

So, on to lighter observations from American Idol, poor Paula’s hair was worse than usual. I mean – did you notice that her real hair ran out around the tops of her ears, and the rest was extensions? It looked like she had hair valances and curtains. 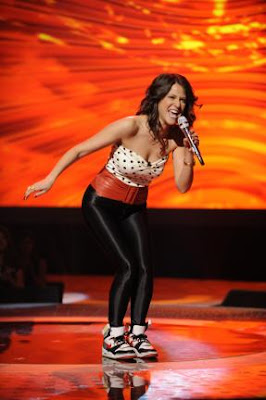 And Jackie’s pants (or, as Simon called them, “trousas”,) reminded me of a certain shopping trip I had in Atlanta. . .except that she didn’t go for the gold.

Our favorites of the night were Danny Gokey and Alexis Grace. Although Chris has a major bitterness issue with Alexis because she has a one year old that she was willing to leave to do this show “to make a better life for her”.

Because we all know that celebrity’s children have a better life than children of normal, well-adjusted, hard-working families.

Personally, I just like Alexis because she has pink hair.

How about you? Any deep thoughts about the night? Or shallow observations?

8 thoughts on “Deep Thoughts, Valance Hair, and Not Another Blog about American Idol.”