Okay. So you remember my pledge against designer jeans after my first pair ever (that I bought for $22 – 90% off) shredded in 6 months?

And then remember how all of YOU kept going on in the comments about how GREAT designer jeans are and how I must have just gotten a bad pair and how you can’t possibly imagine living without them?

Yeah, thanks for the resolve boost.

So every now and then, I have been checking out the clearance racks to see if I could find any. Note that I said Clearance racks because I certainly wasn’t going to pay more for them than I would a regular pair of jeans, but they are oh-so-comfy and nice-fitting. . .

And I’ve been picky. I mean, I wasn’t going to buy any old pair of jeans just because they were designer, on clearance, and I could manage to cram my body into them. No, they had to be flattering, comfortable, and CHEAP.

And, as an aside, if you’re wondering why I care about brand names and designers, be sure to check out Jennifer’s post where she was exploring the same issue. I commented and listed my reasons, and she called me shallow :) – a fun post for sure! And you might want to weigh in your opinion on the issue as well. . .or further back up Jennifer’s claim of my lack of depth.

Back to the story.

I finally ran across a pair last week. Citizens of Humanity. By the way, why do all designer jeans have to sound like New Age Cults? True Religion, Seven for all Mankind, Citizens of Humanity . . . anyway, they were soooo soft. . . and flattering, and nice in color and style. They were about 70% off, and just slightly more than I would pay for normal jeans.

SO I wandered through the dark hallways of deceptive marketing once again and took the plunge into the pool of brand-name-materialism.

And they were so great. They stretched out just right, they “felt good”, I was happy.

Until, on my second wearing of them, the metal placket on the back pocket popped off. It hung at this nice angle and left a hole where it belonged: 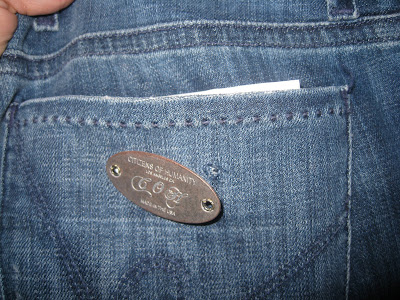 I DO love the quality you get with designer jeans. You just can’t beat it. Gee.

So I brainstormed on how to fix it, but since I don’t exactly have a riveting machine (where’s Stella from Project Runway when you need her?!?!), I couldn’t think of an acceptable solution that wouldn’t make the problem worse down the road. So I decided to email Citizens of Humanity and ask them what I could do about my problem.

They sent me back a form letter that said that this almost NEVER happens to their jeans and that this is a very rare occurrence (which I found ironic since it was obviously a form letter), but that they didn’t do direct exchanges since there were so many counterfeits on the market, so I needed to take them back to the store that I purchased them from (implied message: “as if you purchased them at a store and not in a back alley for $4.99”).

I was really asking how to fix the problem, but since this NEVER happens to their jeans, I suppose that they had no idea how to fix them.

So I decided to take them back to good ole’ Belk (seriously people: How DID that name get by the focus groups?!? If your name is Mr. Macy, by all means, name your store after yourself. Or if your name is Nordstrom or Bromberg or . . . .BUT NOT IF YOUR NAME IS MR. BELK!!!) and they said that I could exchange them, but of course since they were 70% off, they were sold out.

And, for the record, oh ye Citizens of Humanity, the very knowledgeable Belk clerk that was helping me examined them in hopes of helping me fix them, and pointed out that the rivets were barely in the pockets, and the figured that even if I could have exchanged them, it would have happened all over again.

However, I really liked the jeans so I didn’t want to just return them, so I attempted again to email Citizens of Humanity. I told them that Belk didn’t have any more and were there any other options?

I got an eerily familiar form letter back in response.

So, I had to take matters into my own hands.

I had to go to Michael’s today anyway, so I got some super-duper fabric glue. I’ve glued ’em, and they’re “setting up”. We’ll see if it does the trick.

Wouldn’t Citizens of Humanity be proud that their jeans were now held together by glue purchased for $2.99?