Before I get to today’s Christmas shopping extravaganza, I decided to share a few pictures from our event Dinner at Taverna Plaka last night. If you haven’t read my post about our first trip to this restaurant, you may want to start there to help you with necessary Greek History, like the meaning of the word “OPA!!!”.

There was more table dancing. NOT by us. 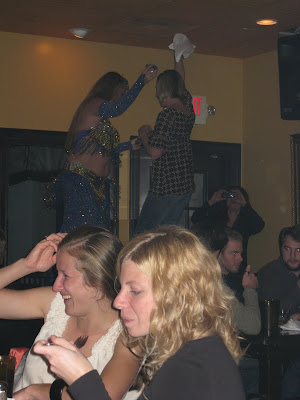 However, Belly Dancer that we named “Light Blue” decided that we needed to dance with her. Here she is confidently trying to convince our very unsure husbands to dance with her. Their excitement is evidenced by Leo’s hasty backing away and Chris’ protesting: 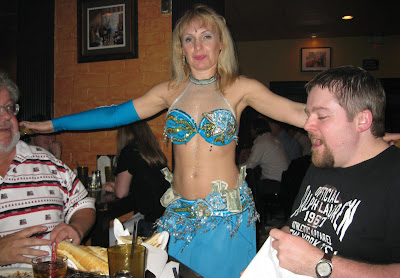 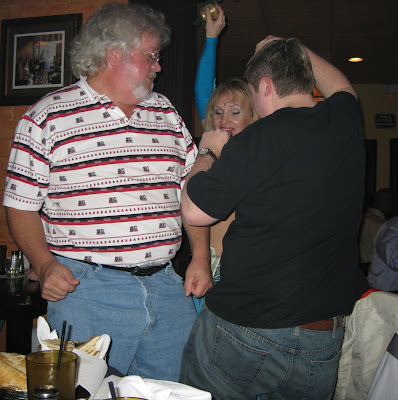 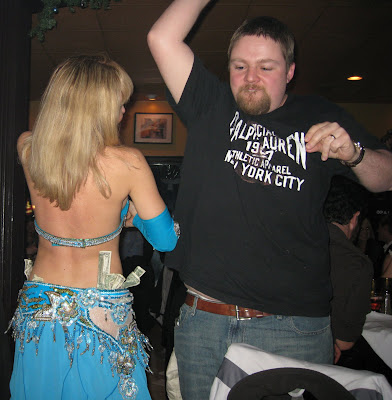 Then she came and got me. I quickly learned that I have MUCH better rhythm sitting down than standing up. Apparently my legs don’t get dancing AT ALL, and my Greek heritage doesn’t give me ANY innate belly-dancing (or any other dancing) abilities. 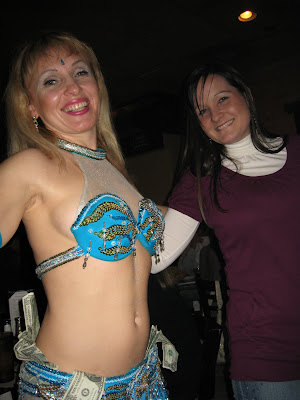 . . . and I have that same WMD Mouth Position. Told you it was important.

And finally, here’s a video of more fun from Taverna Plaka. They got a line of people to circle the whole restaurant doing some sort of Greek Line Dance. Seeing as how I had already realized my lack of dancing abilities, I stayed off of the line so as to not ruin it.

Ok. So on to today. Kitty and I had a Christmas Shopping spree at the wonderful Malls on either side of our hotel (Phipps Plaza and Lenox Square Mall).

Being that Atlanta is a fashion mecca (at least compared to Birmingham), we got to see lots of “interesting” items.

One item that caught my attention by completely blinding and knocking me to the floor with their solar power were these lovely gold lamé leggings: 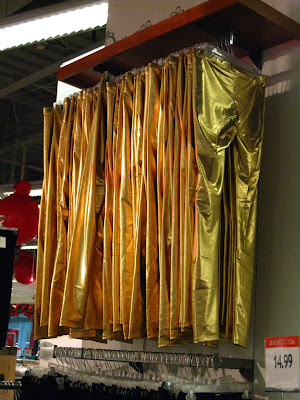 There have recently been posts by a couple of my favorite bloggers about tacky leggings, including one by Stephanie that is specifically about gold lamé leggings. So I decided to kick it up a notch and go where no blogger has gone before.

But not until I found an equally tacky shirt with gold lamé detail on the shoulders:

I know, I needed some tacky gold stiletto’s to go with them, but I was not going to be wearing that outfit to the shoe department in order to finish the outfit.

It brought back memories of being a Junior Higher and trying on prom dresses. Oh, the days. . .

I really wish I could fully describe the feeling of those pants. Pictures don’t do them justice. They were Pure, 24 carat, rubber-gold. I seriously felt like a character from Star Wars when I put them on. Maybe I could wear them to Dragon*Con next year. . .

Now on to more mall observations before I decide to delete that photo.

OK – you remember that song that came out last year that went “Apple Bottom Jeans. . . boots with the fur”? I never CHOSE to listen to that song, but it seemed to be playing everywhere I went. It was inescapable.

Anyway, I had wondered what “Apple Bottom Jeans” were for a long time. Were they a style? Were they a brand? A few months ago I found the brand. But today, I actually read the tag, and discovered: 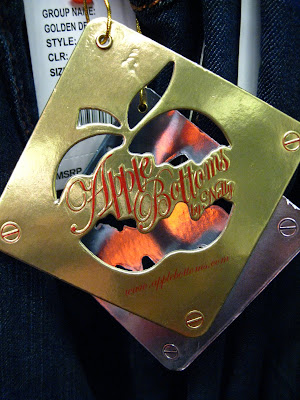 “Apple Bottoms by Nelly”. The artist of the song was singing about his own clothing line!!! That is as bad as the oh-so-fake lines in The Biggest Loser when Bob will tell his players, “Don’t forget your Extra Mint Chewing Gum! Only 1 Calorie and it will help curve your cravings!”.

That’s what this decade is going to be known for. The influx of shameless, “sneaky” advertising.

In other news, Kitty and I needed to find the ladies’ room, and there was this HUGE line. We were afraid it was the restrooms, but then realized it was to ride “The Pink Pig”. I have NO idea what the Pink Pig is, but everyone in Atlanta wanted to ride it! 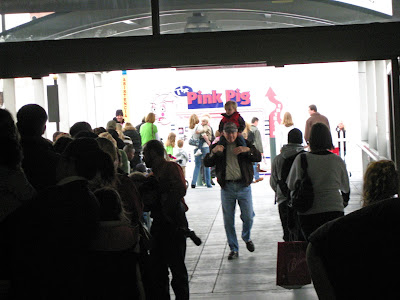 And finally, for the most undeservedly pricey item of the day, this somewhat plain black shirt: 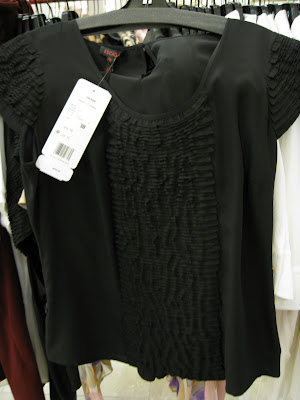 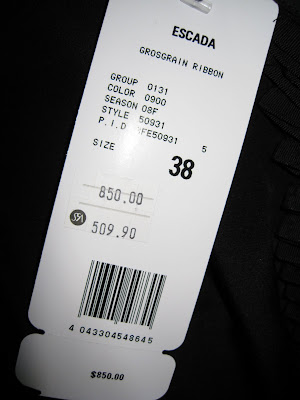 But hey! At least it was on sale!!

To demonstrate my shopping prowess cheapness, I would like to say that I left that very store (Saks Fifth Avenue) with the purchase of a shirt for which I paid $15.82.

So now I must leave you for the day so that I can prepare to comfort my husband when he gets back to the hotel from the game. I sincerely hope that the horrible image of my gold lamé outfit hasn’t seared your eyes from it’s nuclear rays.