I cannot think of a single word that can describe my complete and utter exhaustion at the moment. Why I’m even typing this now befuddles me completely.

It was a wonderful Christmas day, but completely full-speed and nonstop. So, I will be back hopefully sometime tomorrow with a full recap of our day.

Until then, I re-offer you my post from Wednesday, which I am assuming from the complete lack of commentation that everyone was too busy with Christmas Eve activities to read. Either that or the more unfavorable possibility that it was wholly unentertaining. But hey – it’s what I’ve got tonight. Merry Christmas, and I’ll see you tomorrow, assuming that I roll out of bed before it’s time to go back to bed.

I began telling you about the perils of letting your two year old do most of the design work on Christmas cards in this post. Here are a few more of her masterpieces, with their appropriate titles:

“The Card is always Whiter. . .”
Leo’s bird didn’t want to stay on his card. It took off flying toward’s Kitty’s. Maybe Kitty’s hat just looked like too good of a perching place. I think that perched Cardinal may have had something to do with thise polka-dots on Kitty’s Snowman’s scarf, though. . . 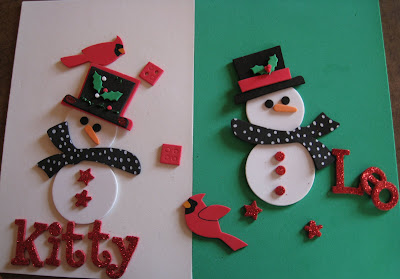 “The Birds”
Every time I gave Ali a bird for Heather’s card, she would put it on her card, sit back and ponder her design choices, and then take it off of Heather’s card and put it on Joey’s. What resulted was a Bird Blizzard, leaving Joey’s Snowman’s sparkly red mouth gaping open. This one reminded me of BooMama’s fear of birds, and even though I’m not normally afraid of birds myself, his card is pretty frightening: 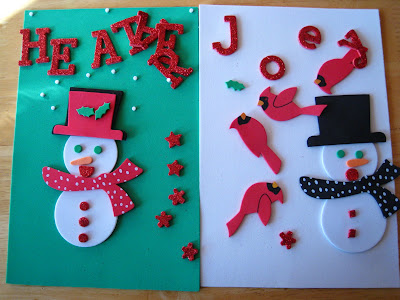 Heather’s snowman, however, looks perfectly peaceful to be unattacked by falling Cardinals. She doesn’t even look disturbed about the four-letter-pileup on her naming interstate.

“The Snowman on Elm Street”
I saved Gina’s snowman from having three eyes, even though Ali begged me for “nother green eye!! nother green eye!!”. However, when she stuck the sparkly trail of blood coming out of one of the allowed eyes, I was laughing so hard that I couldn’t make her take it off. 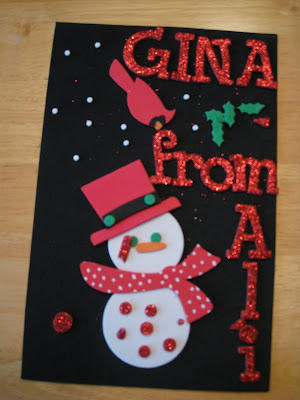 1 thought on “If Only I Had the Ability to Even Come Up With a Witty Title for this Post. . .”