As you read this, I am in Tuscaloosa enjoying an all-day-outdoors-tailgating-extravaganza, a la Chris. I will have left at some crazy time in the morning, and won’t be getting back until way after blogtime bedtime. But I care about you, my readers, so I would never leave you hanging without a blog for an ENTIRE day (or mostly never, anyway), so I prepared this blog last night because I am just THAT thoughtful.

I’m really starting to look like that wacky blogger, taking pictures of random things. I know this, and I’m okay with it. We all have our quirks.

Chris text messaged me Friday morning and told me to fill up my gas tank, due to Ike coming in and raising all of the prices. However, I had a full tank, and usually when these gas scares happen, it goes up like 10 cents – big deal. Plus, I’m not one to harp about rising gas prices. So I texted him back and told him that my tank was almost full already. However, I immediately changed my mind as I was passing between two gas stations, and this was happening at the one on the right: 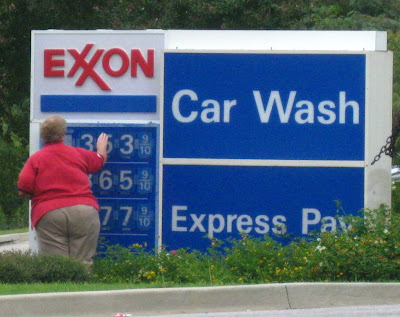 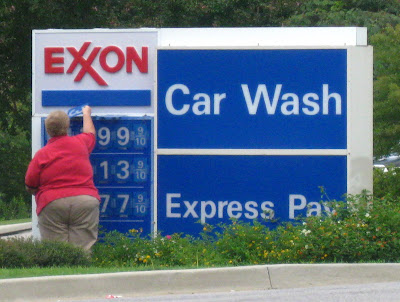 That’s right – she was raising the price by 46 cents!!! At one time!!! That is ludicrous. So I pulled in the other gas station, that was still at $3.52 and put as much gas as my already full tank would take. Of course, while doing this, my way-too-objective brain was spinning.

The hurricane hasn’t even hit land yet!!

They paid a certain amount for that last truckload of gas.

So who is getting that extra .46?? The guy who owns that station? Or does Exxon Corporate get all of those extra dollars?

I’m sure that Neil Cavuto could clear all of this up for me, but I’m not up for a bunch of mumbo jumbo. I just know that it seems ludicrous to me. Oh – and Chris said that the guy at the gas station he stopped at said that he was about to raise his price by over a dollar.

After championing over the gaslords as much as possible, Ali and I headed downtown to eat lunch, again, at the Greek Festival, this time with our good friend Dana. We were early, so I thought I would be smart and park in a parallel spot near the Church, rather than the lot two blocks away and have to lug me, my purse, the diaper bag, Ali, AND her stroller all onto the shuttle. Sure enough, less than a block from the church, there was a big, wide parallel spot open.

However, this was my first time to try and parallel park in my Pilot. I’m good at parallel parking in a Civic – which I’ve had one or another of for 9 years. But I quickly discovered that there’s a BIIIG difference in a Pilot and a Civic.

I worked on it and worked on it, much to the amusement of the guy on the sidewalk, who stopped to try and help me for a minute.

Then, SUCCESS!! It was a perfect parallel parking job. Perfectly straight, and not too close or far away from the curb. Believe me, I was PROUD.

I got out Ali’s stroller, got it all set up, and reached in my purse to put money in the parking meter, and then noticed this: 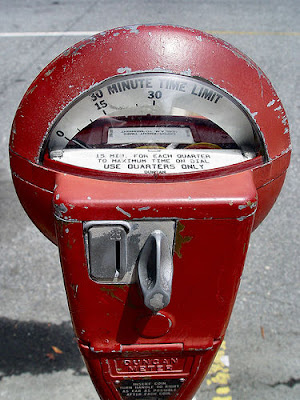 All that work for nothing. I knew we would be there way longer than that, and considering my driving record of late, I needed no opportunity for the police that are magnetically attracted to my car to come ticket me.

So, I packed up the stroller again, got in the car, and drove out of my delicately parked spot, much to the amusement of that helpful guy on the sidewalk.

We were planning on taking Daddy back to the Greek Festival tonight, but were running a bit later than ideal, and Ali had been pretty impatient in her stroller or due to the loud music our last two visits, so we bailed and went to Mudtown instead.

We hadn’t been in a while, and let me just say that it was even better than I remembered. I got my favorite, the Tilapia/Fruit/Balsamic Vinaigrette Salad, which is SO MUCH BETTER than it sounds. And, true to the day’s form, I took a picture: 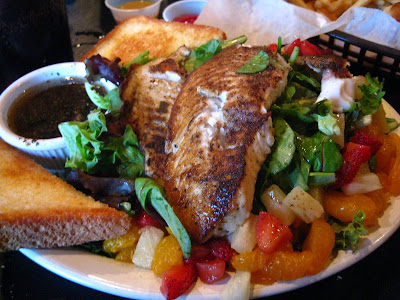 I actually took this picture to tempt Lindsay, since I’ve been trying to convince her to go try this for the longest. It is SO delicious and refreshing, AND it shouldn’t mess up your next Friday Fess Up, since it’s Grilled Fish, Fruit, and Salad, right?!?!?!

Well, that was my day in pictures. Hope you enjoyed it enough to make up for all of the oddly staring people.