Am I the only Mom out there that can’t stand to have missing toys?

Or worse – missing PARTS of TOYS??

I pretty much know where all of the toy hiding places are. . . under the tv armoire, under the couches, under Ali’s dresser (which is an especially hard reconnaissance mission), but hopefully NEVER in the trash (Ali has a new obsession with “trosh“. She announced that the TV Remote trosh the other day, and so now I’m scared for it’s life).

There are a couple of “pet” toys that I really like to have all of their pieces in known locations. Her Fisher-Price singing and counting piggy bank has 10 coins (how will she ever learn to count to 10 if her piggy bank doesn’t have enough coins?!?!), and then she has a stackable cup/ball set that she really likes (and so do I, apparently). I sometimes go on missions to see if I can locate all of the pieces of these (and other) toys. 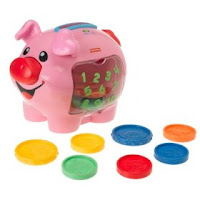 The Piggy bank is especially tricky, because Ali and Daddy have this game with the coins of passing them back and forth via their mouths (good thing none of us are germophobes around here.), and so they often leave their “home room” (all of her toys have a room in which they “belong”) and are found in random places. Recently, I was determined to return all the coins to their piggy owner. It took quite a while, but when I found that last coin, I rejoiced as much as the lady in Luke 15 (who, ironically enough, was also hunting down her tenth coin).

Today I found a new place that I’ll have to start checking. I accidentally kicked one of Ali’s balls underneath a very heavy bookshelf in my office, that also has very low ground clearance (high enough to let a ball through, but low enough to not allow my arm to reach it). I also found a few other toys under there while recovering the ball.

I know what you’re all thinking: “if she had more kids, she’d quit worrying about the location of toys.” Probably true, but believe it or not, my obsession has calmed down quite a bit in the last few months. Maybe it was from adding two more jobs (and a blog) to my already busy schedule.