Yesterday morning: Ali woke up on the 2 Year Old Side of the Bed. It was so weird, because she is usually so sweet and compliant. She did the opposite of what I told her, then would just STARE at me – she has quite a stare when she is being belligerent. Here’s a picture that I got of “the look” a couple of weeks ago: 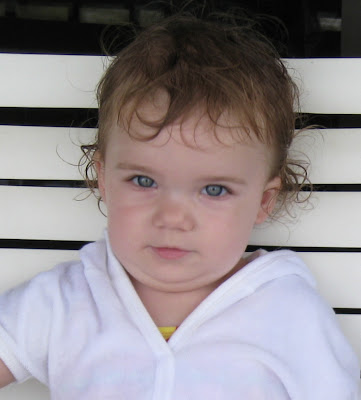 Chilling, isn’t it? She would hit whatever was nearest to her in frustration when I said “no” about anything, and she would not do what I asked her to do until she got disciplined. Her attitude was such a new thing, that it didn’t frustrate me too badly, I was more just amazed at how quickly it came on!!

Lunch: we were at work (had to go in for a meeting), and I was explaining to my boss who wanted to keep talking about something else that I needed to get home for Ali’s nap, and he said flippantly to Ali (who wasn’t even looking at him or paying any attention – or so it seemed) “Girl, go lay down right over here and take a nap!!”. We looked away for a second, and when we looked back, she was laying in the exact spot he had pointed out and was closing her eyes. Then he told her to roll over, and she rolled over. Amazing how kids will mind other people better than they’ll mind their own Mommy!! Obviously, that didn’t work out for my boss. I still left. :)
Afternoon: she was a complete angel – obedient, sweet, loving, the whole bit. She did everything I asked her to, with an excited “I’m pleasing Mommy” look on her face the whole time. Apparently she woke up from her nap on the other side of the bed. Phew.
Evening: I was FRIED and EXHAUSTED. I think the 2 year old morning had an effect, it just took a few hours to set in.
This morning: Me and Ali prayed at breakfast for both of our attitudes. :)
And, by the way, ever since I posted on how well her one nap a day was going, she has woken up earlier in the morning and not napped as long. I KNEW better than to post something like that!! Maybe this will re-jinx it back into place.