Here is the update + pictures from JC!!!

Okay then. Here it goes.

Lindsay was discharged from the hospital yesterday around lunch time. When they came in to take her vital signs her BP was still too high for them to discharge her, but the nurses had her lie on her side, and take deep breaths which got it just below where it needed to be.

She had developed a headache over the past two days, and after we went home it became much worse. It was better when she was lying down, but unbearable when she was sitting or standing. When we went to visit Eli last night I mentioned it to one of the nurses who had us go back downstairs to see the doctor on call at the maternity entrance. It turned out to be caused by complications related to the epidural, a “post dural puncture headache.” There is a procedure, a blood patch, they can do to fix it, but they chose to take a more conservative approach and treat it with medications and fluids. We were glad of this because the anesthesiologist on call was the same one who botched the epidural, and he didn’t sound very confident in his ability to do the blood patch. She felt somewhat better after the drugs and the IV, so they sent us home around 1:30. She feels much better this morning, so we’re hopeful that the conservative approach will work.

Eli is doing great. They’ve started feeding him breast milk (through a tube) over the past 24 hours, and he is responding well. His breathing is easier and so they were able to remove the C-PAP (tubes to hold airways open and give him oxygen). Since he no longer has the C-PAP, they have moved him to a covered bed (incubator?) where they can control the oxygen level of his environment. He’s breathing 35% O2 now, which is a big improvement from 50% with the C-PAP a couple of days ago. And while the nurses warned that his weight would fluctuate do to the fluids and milk they give him, we couldn’t help but be excited about the fact that he weighed over three pounds last night. That’s about a 40% weight gain in three days. We still haven’t been able to hold him, but it’s amazing to see the way he responds to touch. We didn’t get any pictures last night, but I’ve attached two from the night before.

Thank you all for your prayers, your kind comments and words. The support and love we’ve felt has been overwhelming. While we still have a long way to go, it’s great to know we have such wonderful family and friends looking out for us. Special thanks to Rachel for keeping everyone else updated. It’s such a relief to know that you all have a way to check on Lindsay and Eli.
J.C. 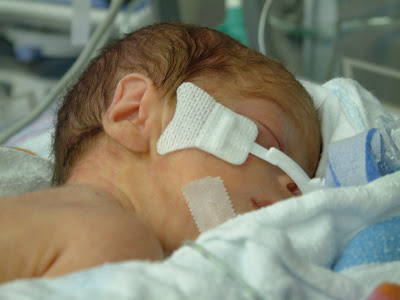 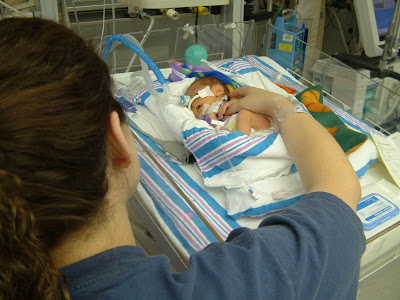 2 thoughts on “Update on Lindsay and Eli”