Ali has LOVED bubbles the last couple of days. She’s always liked them, but now “bubble” is a part of our regular vocabulary. “outside. bubble.” is a normal request. Here are some bubbly pictures: 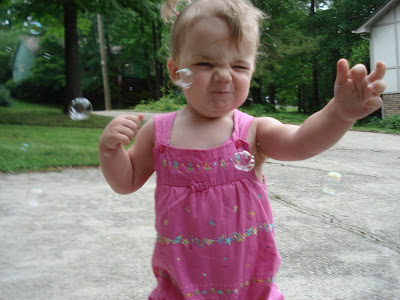 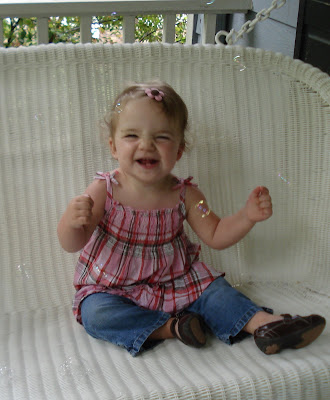 We went to the Fish Market for dinner tonight. Of course, on the week that Ali learns to say “salt” only in reference to the big Greek salt shakers, we go to the one and only restaurant in Birmingham that serves salt out of those shakers. And, as I mentioned before, she doesn’t say it in a very nice way. AND, The Fish Market is a pretty loud restaurant, so she felt the need to raise her voice (in a happy way) to let us know that she without a doubt wanted the salt. So we found ourselves covering our face as our daughter yelled out “s**t! s**t! s**t!!” multiple times throughout dinner. Gotta love toddlers. It’s such an adventure!!

In other news, I had a wreck this afternoon. Yuck. And it was the first wreck that I’ve ever had that was my fault. (Well, except for one other one, but it didn’t count, because there were no other drivers involved, and it was a slippery hill right after it started raining and not REALLY my fault.) But this one was my fault. I hate to even say what happened because it was so stupid. So maybe I won’t. Well, it was partially stupid and partially understandable. But no one was hurt – (it was a parking lot wreck) and Ali didn’t even notice. Being that this is the first wreck I’ve ever had in an SUV, I must say that the “ride” is much more comfortable. You barely feel a thing, but you do tend to crunch the other car (not such a good thing). In the many wrecks (all not my fault, mind you) that I had in my many Civics, the impact was MUCH more noticeable. I will have to get my car fixed, though. It knocked my muffler loose, and it was so rattly I couldn’t drive more that 1 mph. But Chris came and tie-wrapped it back up and it drove almost like a champ! He’s my hero!

I felt kind of like a money pit today. No accountant ever likes feeling like that. Last week having to go to the doctor twice and the ER, and this week having a wreck. But hey, that’s what we have insurance for, right? And, after all, I am working two jobs. At least I pay for myself.

In happier news, Sunday is Lindsay’s Baby Shower at my house! I’m really getting excited about it. It is VERY unlike me to take on such an huge event, especially at my house. And we sent out over 70 invitations!! I’ve been getting ready for it for a couple of months now. But it’s been fun planning and decorating for it – I think I like this social-hostess-type thing! Maybe I’ll even do it again! I would post pictures of some of the decorations I already have up, but no point in ruining a surprise. I will definitely post them Sunday or Monday though!