I have always been a very conscientiously honest person, but yesterday, I admit it – I lied. Not just that, it was a premeditated, planned out lie. Yup, and Ali is going to read this one day and know that I lied. I’m a terrible Mother.

As I have mentioned before, they have camels for you to ride at the zoo this year! I have been so excited to ride the camels with Ali!! However, last time I was at the zoo, I saw it – the horribly unfair, discriminating sign. You have to be TWO years old to ride the camels!!! What a silly rule. It must be for liability, right? So if I take on the liability rather than them, what could go wrong with that? Ever since our last Zoo trip, I have been planning and justifying in my mind so that Ali and I could ride the camel.
So we went to the zoo with Ashley and AJ yesterday, and it was more crowded than I have EVER seen the zoo. At least 30 school buses, every parking lot, curb, and grassy space filled with cars, the lines off the sidewalk, just CRAZY. So I had figured that today would not be a good day to ride the camel. However, once we got inside the zoo, it wasn’t nearly as bad. And since it was mostly school groups, the camel line was really small. So today was the day after all! I give our camera to Ashley, and Ali and I head off to wait in line. Now, for reference, Ali on the whole is not too afraid of animals, but in the past couple of months, has gotten a little more skittish about petting and feeding animals that she doesn’t know. She loves looking at them ALL from a distance, she just doesn’t always want to get withing touching distance (ever since that Llama tried to eat her shirt, I think). There are about 5 people in line in front of us, and every time a camel comes around the circle and someone gets on, Ali looks at me, shakes her head vigorously and says “uh uh, uh uh”. She knew EXACTLY what we were waiting in line to do and wanted to have no part of it!! Me, being the compassionate and kind mother I am, was determined to take her on the camel ride anyway. :)
So we get to the front of the line, and the very businesslike lady barks, “how old is she?” Out comes my well-thought-through lie: “She JUST turned two!” she barks, “OK. give me your money. Stay on the bottom stair until I tell you to come up.” It worked!!!! So our camel comes around, and Ali is still shaking her head and saying “uh uh! uh uh!”. I stick her on the camel, and she starts to fuss. I get on behind her, reassuring her in the most happy upbeat voice ever. The camel starts to walk, and it’s very bouncy and bumpy, and she’s still letting out a little protest every now and then. We get a quarter of the way around the circle, and I point out AJ to her, and she got distracted watching AJ enough to quit whining for a minute. AJ, however, was feeling Ali’s pain for her – and screaming in fear and pointing at Ali. So we took our minute and a half camel ride (for $11 – they are making a FORTUNE!!!), and it was worth every dollar, and every lie. So much fun!! Here are the pictures that our wonderful photographer Ashley took:
Notice the not-quite-so-excited look on her face here: 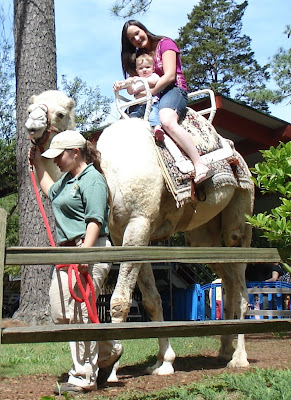 She’s still keeping her eyes on AJ as we go around the circle. 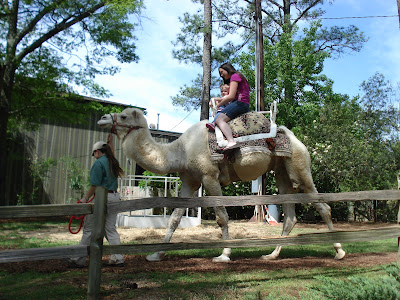